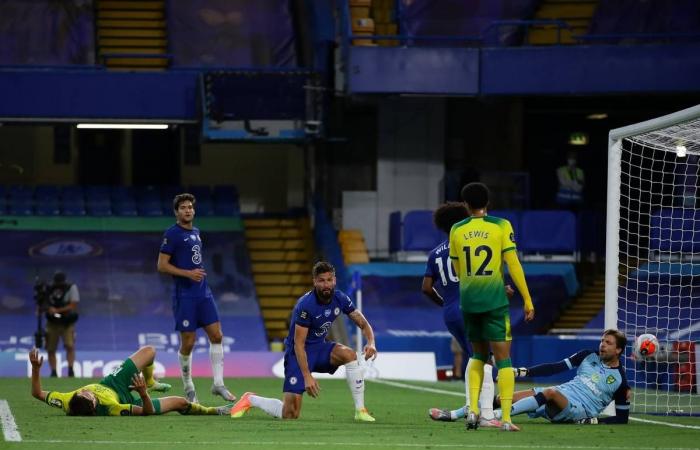 Frank Lampard admitted Chelsea are struggling with nerves as they chase a place in the Champions League next season after Olivier Giroud scored the only goal in a 1-0 win over already relegated Norwich at Stamford Bridge on Tuesday.

Victory opens up a four-point lead for third-placed Chelsea over Leicester and Manchester United, who both have a game in hand later this week.

But Lampard knows there is still plenty of work to do with a trip to champions Liverpool and sixth-placed Wolves visiting Stamford Bridge on the last day of the season to come in Chelsea's final two league games of the season.

"I want more but that can wait. Where we are at as a team and our position in the table, three points is everything," said Lampard.

"If we want to really move on then it can be better. It's not easy, there is a nervy feeling there for understandable reasons."

Lampard was furious with his side's lack of fight in surrendering to a 3-0 defeat at Sheffield United on Saturday that plunged Chelsea's chances of a top-four finish into doubt.

The former England international made five changes from the battering at Bramall Lane with Giroud among those restored to the starting line-up.

Chelsea have already significantly bolstered their frontline for next season with the signings of Timo Werner and Hakim Ziyech.

But Giroud has more than justified the decision to also extend his contract by a year during football's shutdown as Chelsea's most potent striker since the restart.

"He's a big character for us and scoring important goals," added Lampard.

Giroud saw a number of chances come and go in the first half as an attempted lob over Tim Krul fell gently into the Dutch 'keeper's arms before he sliced well over the bar when unmarked inside the area.

Christian Pulisic forced Krul into his best save of the first-half with a powerful drive that was just too close to the former Newcastle stopper.

Just as Norwich looked set to hold out until the break Giroud shrugged off Timm Klose to connect with Pulisic's cross for his fifth goal in eight games.

"I missed some I don't miss usually," said Giroud. "I lost a bit of confidence but my desire to score was bigger, so I just tried to stay focused and on the cross of Christian I anticipated this header."

Norwich's long-awaited fate of a return to the Championship was confirmed in a 4-0 thrashing at the hands of West Ham on Saturday.

There was more defiance from the Canaries in defence, but they failed to score for the seventh time in their last eight games to slump to a ninth straight defeat.

Daniel Farke's men failed to even test Chelsea goalkeeper Kepa Arrizabalaga or a defence that has been under the microscope for conceding 49 goals already in the league this season with a shot on target.

These were the details of the news Olivier Giroud guides 'nervy' Chelsea closer to the Champions League for this day. We hope that we have succeeded by giving you the full details and information. To follow all our news, you can subscribe to the alerts system or to one of our different systems to provide you with all that is new.