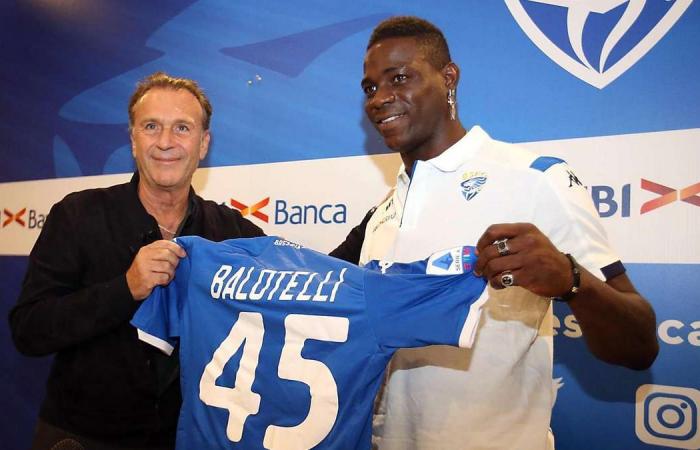 Hind Al Soulia - Riyadh - Another summer, another scramble to sign Mario Balotelli. Or at least that’s what people representing the much-travelled striker, only 29, insist.

His next adventure may be on a new continent. Argentina’s big two, Boca Juniors and River Plate are said to have shown an interest, along with Flamengo in Brazil. Sharjah, linked with a move for Balotelli, have denied making a bid.

What is certain is that Balotelli will not be playing for his hometown club Brescia again in the near future, and what is almost certain is that he will be adding a new entry to his long CV: a relegation.

Brescia, where Balotelli was a ballboy as a child and the club he joined last summer, are one off the bottom of Serie A, nine points from safety with six games to play.

Tonight’s fixture, at high-flying Atalanta, ought to have been a highlight of Balotelli’s great homecoming, a local derby with a sharp edge and, even without spectators because of the Covid-19 conditions, an especially emotional one.

The region around Bergamo, Atalanta’s home, and Brescia was an epicentre of the virus when it started claiming its thousands of lives.

Against that backdrop, the latest chapter in the Balotelli saga is no more than a footnote.

During the period of lockdown the relationship between the player and his employer deteriorated beyond repair. In February and March, Balotelli was captaining Brescia; he was the club’s leading scorer – with five goals – in the league.

But since the restart of Serie A last month, he has not even trained with his team-mates.

The divorce may yet end up in court, with Balotelli claiming salary arrears from March, among other disputes.

One surrounds the circumstances in which he was refused entry to the club’s practice ground after training resumed.

Brescia claim he had not followed the protocol in informing them of his fitness and health, so they could not allow him onto the premises.

Balotelli’s representatives say the club had excluded him from the mandatory Covid-19 testing regime applied to the rest of their players, a claim Brescia call ‘false’.

According to Brescia’s manager – their third different coach of a wretched season – Diego Lopez, Balotelli could not in any case be considered for the starting line-up or the substitutes’ bench because he had not kept himself fit enough.

“The rest of the players went in one direction,” Lopez said of the fitness plan given to the squad while they were at home in isolation, “and he went in another direction. He is not in the same shape as his colleagues.”

As if to make the point, Brescia last week updated his details on their official website to indicate he had put on several kilos in weight.

The story of ‘Super Mario’ at Brescia was not supposed to end like this. Eleven months ago, his arrival, after a six month stint at Marseille, was heralded as a coup for the club and, for the player, a romantic reunion with the city he grew up in.

President Massimo Cellino spoke of Balotelli’s "commitment" and a bond with Brescia that would insure against the fidgety habits of most his career.

Balotelli is one of the game’s frequent movers: Since leaving Inter Milan for Manchester City a decade ago, he has never stayed anywhere for more than two-and-half seasons.

At City, he won the Premier League in 2012, memorably contributing to the last-gasp Sergio Aguero goal that sealed that title.

That was his last club trophy, and as he surveys his hopscotch career, he can hardly help but note that a longer stay at some of his previous clubs would have enriched a resumé that included three Serie A titles and a Champions League – with Inter – while he was still in his teens.

Liverpool signed Balotelli in 2014, but he left such a poor impression there that when Jurgen Klopp arrived the following year, he immediately excluded him from plans that would eventually lead the club to triumph in Europe and England.

But his time in France, where he played for Nice and then briefly for Marseille, had pushed Balotelli back into contention for the Italy national team.

The Brescia move was welcomed by Roberto Mancini, Italy’s manager and Balotelli’s former coach at both Inter and City, as a possible platform for the player to make himself a key part of the Euro 2020 campaign, which Italy were approaching with optimism.

The Azzurri will maintain that optimism for next year’s rescheduled Euros. It is very hard, from this distance, to imagine Balotelli being involved.

These were the details of the news Mario Balotelli once again set for new horizons after Brescia homecoming turns sour for this day. We hope that we have succeeded by giving you the full details and information. To follow all our news, you can subscribe to the alerts system or to one of our different systems to provide you with all that is new.