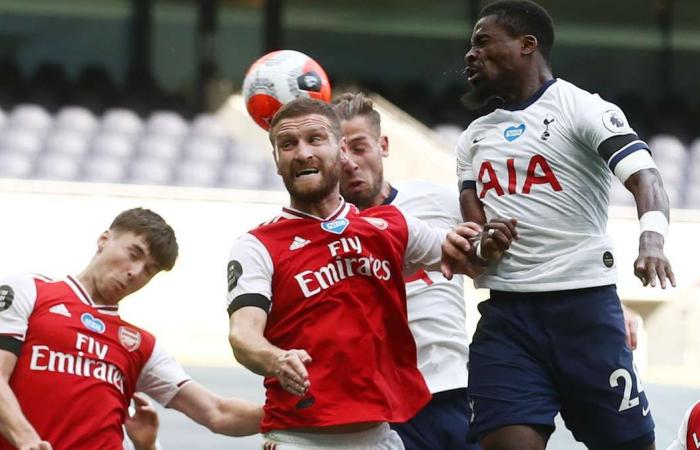 Thank you for your reading and interest in the news Toby Alderweireld and Son Heung-min 8; Shkodran Mustafi 5 - Tottenham v Arsenal player ratings and now with details

Hind Al Soulia - Riyadh - TOTTENHAM RATINGS: Hugo Lloris - 7: Made some big saves, and none better than to deny Aubameyang a goal midway through the second half that would have put Arsenal back in front. Reuters

Serge Aurier - 5: The Ivorian's lack of composure continually put his side under the cosh and it was his mistake that led to Arsenal's goal. AFP

Davinson Sanchez - 7: Part of a defensive unit that held up well as Arsenal enjoyed the majority of possession. Reuters

Ben Davies - 7: The Spurs left-back put in some crunching tackles and rattled the woodwork with a rasping drive in the first half. EPA

Moussa Sissoko - 7: Had a tough job on his hands protecting Aurier's flank but his experience shone through in the closing stages. Reuters

Harry Winks - 5: Booked for tugging back Lacazette, one of several Arsenal players who ran past him with ease. AFP

Giovani Lo Celso - 7: The Argentine's passing was sublime in the opening 45 minutes. Faded badly with Spurs on the back foot in the second, though. AFP

Lucas Moura - 7: The Brazilian's bursts of energy in the second half galvanised Spurs into finding a winner. Reuters

Son Heung-min - 8: Pounced on an Arsenal mistake to finish with a delightful chip and supplied the corner for Alderweireld's headed winner. EPA

Harry Kane - 7: It was his shot that forced the save that led to the winner and the Spurs striker worked wonders down Arsenal's suspect right side. Reuters

ARSENAL RATINGS: Emiliano Martinez - 8: Denied Kane and Son with excellent stops and also managed to tip Davies' piledriver on to the bar. EPA

Shkodran Mustafi - 5: Back to the Mustafi of old as the German made countless mistakes and Spurs targeted his side of the defence for their attacks. Reuters

David Luiz - 6: Son is quick, and Kolasinac's pass wasn't the best, but the Brazilian still should have dealt with the danger before the Korean scored Spurs' opener. EPA

Hector Bellerin - 6: One marauding raid should have resulted in Aubameyang scoring but the Arsenal striker mishit his shot. AFP

Granit Xhaka - 7: Solid display from the Swiss and his combinations with Tierney down the left put Spurs under pressure. AFP

Dani Ceballos - 7: Passing and movement were a feature of the good in the Gunners' attacking play. Reuters

Kieran Tierney - 6: Too often cut the ball back instead of crossing from promising positions. EPA

Nicolas Pepe - 7: Went desperately close to scoring with a curling effort and one neat turn caused Davies to take a booking to stop the Ivorian breaking free. AFP

Pierre-Emerick Aubameyang - 7: Three excellent chances to score with one that hit the crossbar particularly costly. EPA

Alexandre Lacazette -7: Superb strike to open the scoring but the Frenhcman otherwise picked the ball up in deep areas where he did little damage. EPA

SUBS: Bukayo Saka (on for Pepe, 74') - 5: Played on both flanks and his only contribution was a yellow card for petulantly throwing the ball down. Reuters

These were the details of the news Toby Alderweireld and Son Heung-min 8; Shkodran Mustafi 5 - Tottenham v Arsenal player ratings for this day. We hope that we have succeeded by giving you the full details and information. To follow all our news, you can subscribe to the alerts system or to one of our different systems to provide you with all that is new.