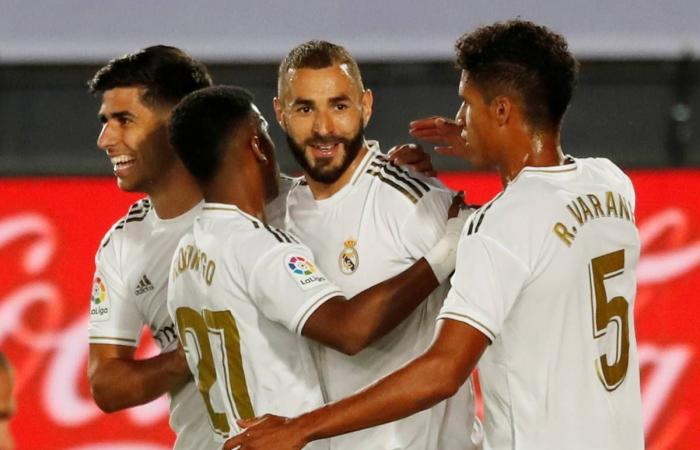 Aden - Yasmine El Tohamy - If Barcelona fail to win away at Real Valladolid on Saturday, Madrid will clinch the title with two games to spare by beating Granada on Monday.

Real Madrid could win La Liga on Monday after a routine 2-0 win over Alaves on Friday put them within touching distance of the title.

With suspended skipper Sergio Ramos sitting in the stands, Karim Benzema took over the armband and then penalty duties, firing in from the spot before teeing up Marco Asensio to add a second at the Alfredo di Stefano Stadium.

After restoring their four-point advantage at the top of the table, the pressure is back on Barcelona.

If Barca fail to win away at Real Valladolid on Saturday, Madrid will clinch the title with two games to spare by beating Granada on Monday at Los Carmenes.

Yet even if Madrid have to wait, it seems inevitable they will hoist the trophy given they also boast the superior head-to-head record against Barcelona with three games left.

Madrid can afford to draw two of those, even if Barcelona manage three victories out of three.

"We still don't know what is going to happen," said Real coach Zinedine Zidane. "La Liga is very hard and we have three finals still to go."

"We have to stay focused," added Raphael Varane.

This loss in Juan Ramon Lopez Muniz's first game in charge leaves them hovering above the relegation zone, only three points ahead of Real Mallorca, who have hope after their win over Levante on Thursday.

Zidane will be relieved all the same, particularly as he had to do without a string of key players.

Ramos and Dani Carvajal were both banned while Marcelo was injured, taking out three of Madrid's regular back four.

Eden Hazard was unable to start but came on in the second half to ease concerns about niggling problems with his ankle.

A makeshift defence, including Lucas Vazquez at right-back, chalked up another clean sheet, Madrid's fifth in a row for the first time in 12 years. It is also their sixth in eight gams since the restart.

Alaves might have broke that run in the first few minutes as Joselu headed against the crossbar and Lucas Perez's follow-up had to be cleared off the line by Varane.

Eder Militao then had to make a perfectly timed challenge to prevent Perez going clear.

But Madrid survived and then took the lead in the 11th minute, Ferland Mendy driving to the line and going down under the sliding tackle of Ximo Navarro, who caught him with his trailing leg.

Benzema scored the penalty for his 23rd goal of the season.

Oliver Burke twice caused Madrid problems with weaving runs forward before Benzema hurt his neck from an awkward fall on the stroke of half-time.

Benzema was able to continue but injured referee Gil Manzano was replaced by Rodriguez Carpallo, whose first big decision was to allow Madrid's second goal.

Rodrygo did well to muscle his way through midfield before freeing Benzema, who looked offside but sped forward and side-footed for Asensio to tap in. Replays showed Benzema had timed his run and the goal stood.

Thibaut Courtois had to make two smart saves but Madrid were cruising by the end.

Rodrygo and Vinicius Junior should have made it three when queueing up at the back post but two was enough.

These were the details of the news Real Madrid in sight of La Liga title after beating Alaves for this day. We hope that we have succeeded by giving you the full details and information. To follow all our news, you can subscribe to the alerts system or to one of our different systems to provide you with all that is new.