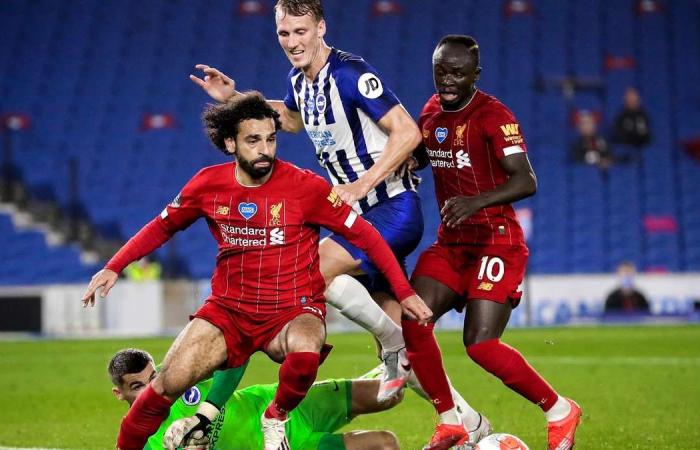 Thank you for your reading and interest in the news Mohamed Salah and Virgil van Dijk 9; Tariq Lamptey 8 - Brighton v Liverpool player ratings and now with details

Tariq Lamptey - 8: Few players have caught the eye since the restart like the 19-year-old. It was his cross that allowed Trossard to finish and his distribution and defending was quality throughout the 90 minutes. EPA

Adam Webster - 6: Won his share of headers but struggled with the pace of Liverpool's forwards. Reuters

Dale Stephens - 6: Never looked comfortable with the likes of Henderson snapping at his heels every time he had possession. AFP

Davy Propper - 5: The midfielder was caught in possession on the edge of his box after six minutes and Liverpool punished him for it. Reuters

Alexis MacAllister - 6: The Argentine with the Scottish name made little impact on proceedings before being replaced in the second half. Reuters

Pascal Gross - 6: Some nice one-touch passes from the German as Brighton created plenty of chances. Reuters

Leandro Trossard - 7: Backed up his winner against Norwich with an even better goal against the champions. Had a great chance to double his tally late on but wasn't so assured with that finish. Reuters

Neal Maupay - 6: Put himself about to put pressure on Liverpool's defence before being replaced. AFP

Yves Bissouma (on for Propper, 71') - 7: Played well and broke up plenty of threatening attacks. Reuters

Joe Gomez - 7: The burly defender was plenty physical and determined to keep Brighton at bay. AFP

Virgil van Dijk - 9: There's no such thing as a 50-50 ball up against the Dutchman. He was a colossus at the back. EPA

Neco Williams - 5: Jurgen Klopp defended his decision to replace the young full-back on 45 minutes because he was on a yellow card. The truth is he struggled up against a surging Lamptey. Reuters

Georginio Wijnaldum - 7: Klopp loves the Dutch midfielder for his work ethic and that was on display in spades at the Amex. Reuters

Naby Keita - 8: Was excellent for an hour before being replaced. Looked a yard quicker than every other player on the pitch including Salah. AFP

Jordan Henderson - 8: Led from the front in attack and defence. Scored a well-taken goal but concern at the end after the Liverpool captain hobbled off with a knee injury. Reuters

Mohamed Salah - 9: The Egyptian opened the scoring and put away a beautiful header for his second and Liverpool's third. Reuters

Roberto Firmino - 7: Another game without a goal but the Brazilian striker offers so much more than that to the Reds. Reuters

SUBS: Andrew Robertson (on for Williams, 45') - 8: Bombed forward at every opportunity and recorded his eighth assist of the season for Salah's second. Reuters

Sadio Mane (on for Oxlaide-Chamberlain, 61') - 7: The Senegalese's pace and control helped get Liverpool up the pitch and into dangerous positions. AFP

Fabinho (on for Keita, 61) - 6: Booked for a hefty challenge on Mac Allister. AFP

James Milner (on for Henderson, 80') - 6: Brought an aura of calm to a nervy looking side after Henderson was forced off injured. Reuters

Takumi Minamino (on for Firmino, 87') - NA: Had a chance to make the game safe at the end. EPA

These were the details of the news Mohamed Salah and Virgil van Dijk 9; Tariq Lamptey 8 - Brighton v Liverpool player ratings for this day. We hope that we have succeeded by giving you the full details and information. To follow all our news, you can subscribe to the alerts system or to one of our different systems to provide you with all that is new.