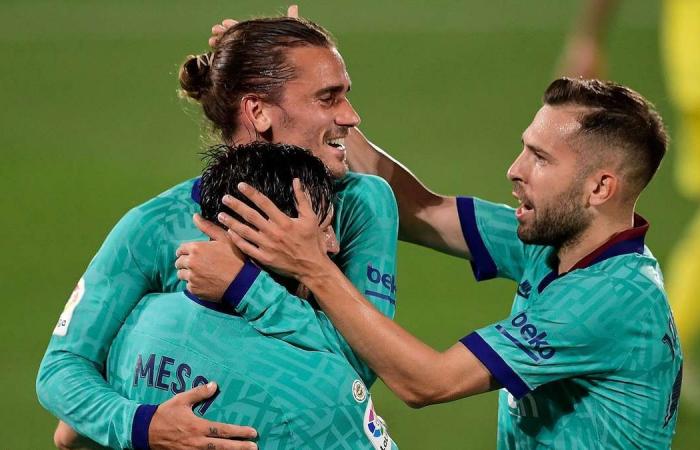 Hind Al Soulia - Riyadh - Gerard Pique offered no help with interpretation. Asked after Barcelona’s 4-1 victory at Villarreal what exactly he had meant with his unusual hand gesture just as a Lionel Messi ‘goal’ was being ruled out by VAR, he said he could not remember.

The gesture, delivered with a smile, had Pique mimicking someone tapping out a message furiously on a keyboard.

Imaginary instructions zipping their way to the video assistant referee? It looked like it. The idea that VAR is somehow prejudicing Barcelona’s challenge for the Spanish title has become an ongoing theme.

If Pique was not ready to spell out in front of the post-match microphones what he may or may not have intended with his tinkling fingers, his president and his head coach would be more explicit.

Quique Setien, the Barcelona manager, called VAR a “tool that is not being used in a consistent way.” Josep Maria Bartomeu, the beleaguered Barca president, seldom addresses the media after matches, but at Villarreal he did, with VAR on his agenda. “VAR is not very equitable, it is not being managed well and it is not up to the task.”

He had not finished there. “VAR always seems to favour one way.”

By which Bartomeu meant the way of Real Madrid, four points ahead of Barcelona with four matches to play.

The last six Real points have been gained via two penalties and the last three of them confirmed amid much fuming from a narrowly defeated Athletic Bilbao, whose players had been angered that VAR stayed quiet when Sergio Ramos appeared to have impeded Raul Garcia in the Madrid penalty area.

VAR is not very equitable, it is not being managed well and it is not up to the task

The catalogue of Barcelona complaints about interpretable refereeing decisions runs to longer than that.

Once Barcelona started dropping points – they led La Liga when matches resumed last month, but in the last 10 days conceded leads against Celta Vigo and Atletico Madrid before showing their better face at Villarreal – Pique was quickly on the attack about refereeing.

“It’s hard to see Madrid dropping points,” he muttered darkly, “when you look how recent matches have been going.”

The gap at the top could narrow, at least until Madrid play Alaves on Friday, to a single point should Barcelona triumph at Camp Nou on Wednesday in what may be the last city derby for some time.

Espanyol, bottom of the Primera Division, are in desperate trouble, 11 points from safety. They must win all their remaining fixtures to even have a chance of survival.

They can expect no civic sympathy from their neighbours, nor from Pique the provocateur, a footballer whose appetite for nourishing rivalries extends beyond the most famous one, Barcelona versus Madrid.

A little over two years ago, Espanyol made an official complaint to the Spanish Federation about Pique. “Disrespectful,” they called his remarks ahead of a fiery Copa del Rey derby, “and liable to incite violence and xenophobia.”

What Espanyol’s smart, modern arena was not built for was second division football, and however dominant Barca are as an institution, Catalonia’s sporting landscape would be altered for the worse by Espanyol’s economically debilitating relegation.

They have been part of the top division for 26 years, and for a period enjoyed a handsome view from the physical summit of a city invigorated by its hosting of the 1992 Olympic Games. The Olympic stadium, at Montjuic, was Espanyol’s leased home until they constructed their own in Cornella.

In the year Barcelona won their first European Cup of this century, in 2006, Espanyol won the Spanish Cup and went on, 12 months later, to reach the Uefa Cup final. Those were heady days for football in the region.

These are anything but heady days. Barcelona look on course to relinquish a Liga title they held through the last two summers. Espanyol appear doomed to lose a top-flight status they have clung on to, sometimes by the skin of the teeth, since 1994. Last season, Catalonia lost another top-flight member, Girona, to relegation.

The small blessing for Espanyol is that, because of the public health emergency, there will be no Barca fans in Camp Nou singing ‘A Segunda!’’ – ‘Going Down!’ – as they habitually do during derbies.

The chant has not been an accurate forecast for more than quarter of a century. On Wednesday night, they may very well go down in silence – as long as the provocative Pique holds his tongue.

These were the details of the news Espanyol should expect no sympathy from a Barcelona brooding over the 'favouritism' of VAR for this day. We hope that we have succeeded by giving you the full details and information. To follow all our news, you can subscribe to the alerts system or to one of our different systems to provide you with all that is new.