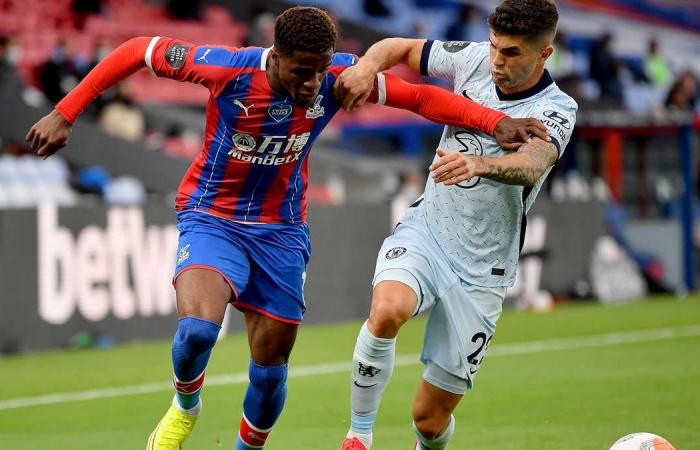 Joel Ward - 7, combined well with his winger Zaha to cause Chelsea problems down the right. Reuters

Scott Dann - 6: Could have earned his side a point they deserved but saw his header crash against the post. Reuters

Gary Cahill - NA, limped off after suffering a bad injury chasing Willian in the buildup to Giroud opener. His season looks to be over. EPA

Patrick van Aanholt - 9: The Dutchman was Palace's best defender and attacker and gave James a torrid time all evening. EPA

Cheikhou Kouyate - 7: Seemed confused as to whether he was meant to track Mount or pressure Gilmour in the first half. Grew into the game in the second. Reuters

James McArthur - 7: Presented with a chance to embarrass Kepa early doors but fluffed his lines from distance. A tireless worker in midfield. AFP

Luka Milivojevic - 7: The Serb destroyer loves nothing more than getting physical. Tired badly at the end though to the point he could barely jog. AFP

Wilfried Zaha - 8: Palace's star man hasn't produced the heights of last year, but his first-half effort was a scorcher. Tormented Chelsea's full-backs in the second half.

Christian Benteke - 8: The big Belgian scored his first league goal at Selhurst Park in over two years. Could have levelled at 3-3 but took too long on the ball. General hold-up play was solid throughout. Reuters

SUBS: Mamadou Sakho (on for Cahill, 8') - 6: Probably played more minutes than he was anticipating and struggled in his battle with Giroud. EPA

SUBS: McCarthy (on for McArthur) - NA; Andros Townsend (on for Ayew) - NA; Max Meyer (on for Milivojevic) - NA

CHELSEA RATINGS: Kepa Arrizabalaga - 5, The Spaniard has the lowest save percentage in the Premier League, and there was little he could do to stop Zaha's thunderbolt, but just isn't a goalkeeper who inspires confidence. AFP

Andreas Christensen - 5: Switched off at the end which almost allowed Benteke to level and was bullied throughout by the Belgian. Reuters

Kurt Zouma - 8: Should have scored with a header in the first half and produced a game-clinching tackle at the death to deny Benteke. Reuters

Billy Gilmour - 6: Tracked back well but Chelsea needed Jorginho's control and influence to see out the game. Reuters

Mason Mount - 7: Showed some fine footwork in the final third in the opening 45 minutes. Reuters

Ross Barkley - 6: midfielder's passing was well down on the levels against Watford. AFP

Willian - 7: Brazilian had little joy out wide against Van Aanholt but plenty of it drifting in field to generally make a nuisance of himself. EPA

Christian Pulisic - 7: A tale of two halves for the American - electric in the first and anonymous in the second. EPA

Olivier Giroud - 7: Showed some velvet touches at the spear of Chelsea's attack and was well worth his goal after Chelsea played on with Cahill stricken. Reuters

Ruben Loftus-Cheek (on for Barkley, 65') - Sumptuous pass to set up Abraham for what proved to be the winner. Reuters

These were the details of the news Christian Pulisic 7, Billy Gilmour 6; Patrick van Aanholt 9, Wilfried Zaha 8 - Crystal Palace v Chelsea player ratings for this day. We hope that we have succeeded by giving you the full details and information. To follow all our news, you can subscribe to the alerts system or to one of our different systems to provide you with all that is new.