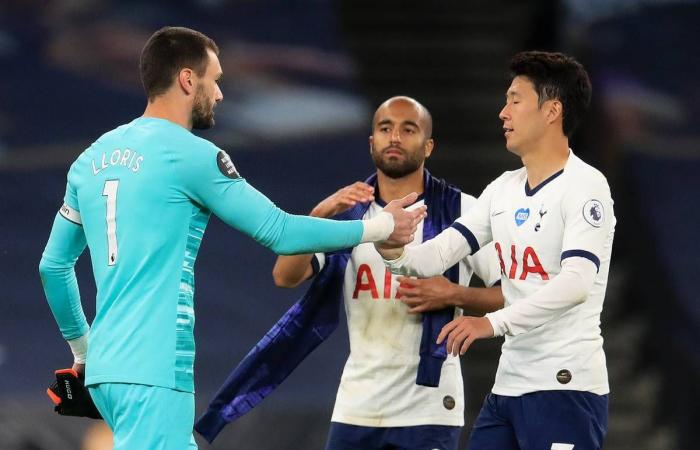 Hugo Lloris insisted he had made peace with Son Heung-min after the Tottenham stars were involved in a furious row during their side's 1-0 win against Everton on Monday.

As Son walked towards the tunnel at half-time, France goalkeeper Lloris confronted the South Korea forward, shouting at him and shoving his shoulder.

The usually placid Son responded angrily and the pair had to be kept apart by team-mates Harry Winks and Moussa Sissoko as the altercation threatened to boil over.

Lloris was irked by Son's failure to close down a loose ball in midfield moments before Everton threatened through Richarlison.

"I think to concede a chance a few seconds before half-time because we didn't make a press annoyed me. But yeah, that's football," Lloris said.

Neither of the feuding players was hauled off at the break as Tottenham manager Jose Mourinho tried to keep the peace.

Son and Lloris looked to have buried the hatchet when they hugged at the final whistle in north London after Tottenham secured their second win since the coronavirus hiatus.

"It just belongs to the changing room. Outside you can say whatever you want. What happened is just part of football sometimes," Lloris said.

"Let's be honest, we are in a situation we are not happy with so we have to fight, to make sure we all go in the same direction.

"Most important is to stay focused on the team. We can only do it as a team.

"When you play a season like this one it's very easy to fall apart but we showed we are still together.

"There is no problem at all. You could see after the game we were fine."

Tottenham sealed the points thanks to a first half own goal from Everton defender Michael Keane, who deflected in Giovani Lo Celso's shot.

It was somehow fitting that the always combative Mourinho's 200th Premier League victory featured the flare-up between Son and Lloris.

In fact, Mourinho was delighted with the row because it showed a desire to win.

"That's beautiful. It's probably as a consequence of our meetings, so if you want to blame someone blame me," he said.

"I asked them to demand more from each other and put colleagues under pressure. It was the situation of the first half where an amazing kid, a team boy like Sonny, that the captain thought 'you have to do more'.

"I don't know if there was any push or more, but it's something important for a team to grow up. I was really pleased. I had no doubt in the second half they would stick together until the end."

Tottenham's second win in their last 10 games in all competitions lifted them into eighth place in the Premier League one point behind north London rivals Arsenal in seventh.

Just a year after reaching the Champions League final under previous boss Mauricio Pochettino, Tottenham have been reduced to fighting for a place in the Europa League.

This win ensured they could still avoid being out of European competition entirely for the first time since the 2009-10 season.

Everton haven't beat Tottenham since 2012 and a first defeat in four games could end their European hopes for this term.

Thursday's limp 3-1 defeat at Sheffield United left Mourinho questioning the desire of his players, but took the lead in the 24th minute thanks to a welcome stroke of luck.

Son found Harry Kane in the area and his effort deflected to Lo Celso, whose shot was going wide until it span wickedly off Keane to wrong-foot Everton keeper Jordan Pickford.

Everton finally threatened in stoppage-time when Richarlison burst forward to shoot wide after Son failed to chase down the loose ball.

Following Lloris's angry exchange with Son, both players were in the spotlight for more positive reasons in the second half as Tottenham held firm.

These were the details of the news Son Heung-min clashes with Hugo Lloris as Tottenham beat Everton for this day. We hope that we have succeeded by giving you the full details and information. To follow all our news, you can subscribe to the alerts system or to one of our different systems to provide you with all that is new.