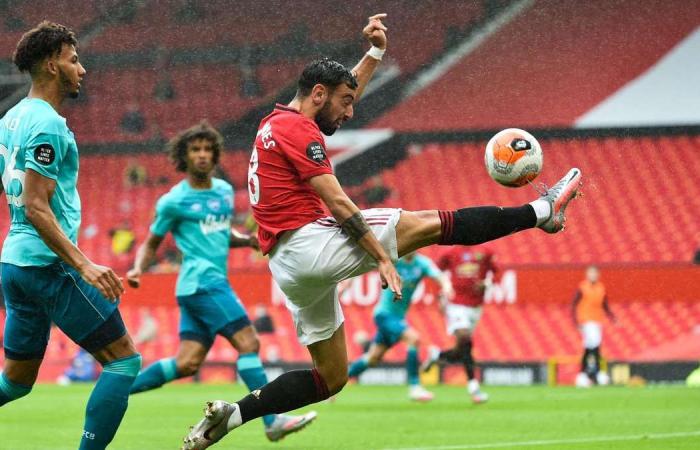 Thank you for your reading and interest in the news Bruno Fernandes 9, Mason Greenwood 8; Junior Stanislas 7 - Manchester United v Bournemouth player ratings and now with details

Hind Al Soulia - Riyadh - David de Gea - 5. Beaten at the near post for the opening goal. Several poor passes out, too. Not good enough against Bournemouth. Reuters

Aaron Wan-Bissaka - 7: Lively and again made more tackles and interceptions than any other player. Incredible ball for Rashford to score a sixth. Shame Rashford was offside. Just. Reuters

Harry Maguire - 5: Nutmegged by Junior Stanislas for the game’s opening goal and less assured than usual. Played every minute of every league game and he’s been a fine signing, but poorest performance for the club. EPA

Victor Lindelof - 6: More blocks and clearances than any other player – notable since he was taken off at half time after struggling with his back. AFP

Luke Shaw - 7: Gets into the advanced positions demanded by his manager and had a chance to score at the end. Reuters

Paul Pogba - 7: Won his aerial duels, impressive curling late free kick. Quieter than against Brighton, but a top class footballer who is enjoying his role in this attacking side alongside Fernandes. EPA

Nemanja Matic - 6: A couple of sloppy passes. He’s been that good that when he gives the ball away we notice. Reuters

Bruno Fernandes - 9: Missed a chance he should have scored, then made two first half assists and scored another goal, the fifth with a fine free-kick. Proper technician. Involved in 10 goals in nine Premier League games as he brings joy to the United world. EPA

Mason Greenwood - 8: Equalised for his 14th goal of the season after a sublime first touch and then his second was another lethal, powerful finish. Smashed the fourth in with almost no back lift. Reuters

Marcus Rashford - 8: Cool penalty (his side’s 17th of the season) struck into the bottom of the net to put United ahead. Super early ball for Bruno Fernandes too. Had an 18th minute free kick on target and saved. Four shots – more than any other player. Better. EPA

Anthony Martial - 8: Unwanted recipient of Jefferson Lemar’s studs in his knee, but incredible strike for United’s third. And, with Rashford goals added, the pair became the first since 2011 to get 20 in a season for United. Frenchman looks fitter, happier, more productive. AFP

SUBS: Eric Bailly (on for Lindelof, 45') - 6: On for Lindelof at half time and penalty awarded against him within minutes. Reuters

Juan Mata (on for Martial, 75') - 6: Busy bee brought onto take the sting out of a Bournemouth defence that had been busier than its beach. Combined well with Fernandes. Overlooked for a late free-kick. EPA

Aaron Ramsdale - 5: Got a palm to Greenwood's first, fingertips to Rashford's penalty but couldn't get close to any of United's other goals. AFP

Adam Smith - 6: Unlucky to give away the penalty on a day when the whole Bournemouth team toiled. Reuters

Lloyd Kelly - 5: His foul on Martial that led to the free kick for United's fifth was unnecessary but involved in some good duels with the Frenchman otherwise. EPA

Diego Rico - 5: Spent most of his afternoon trying to contain Greenwood and was a non-entity in attack. Reuters

Jefferson Lerma - 5: Booked for a reckless challenge in the first half and too often played his team in trouble in dangerous areas. Reuters

David Brooks - 5: Annonymous before being replaced at the interval. AFP

Junior Stanislas - 7: Superb skill to evade Maguire and even better finish from a tight angle to beat De Gea for Bournemouth's first. EPA

Joshua King - 7: Worked Lindelof's channel well in the first half and kept up his fine record of scoring against his former club with a cool penalty in the second. Reuters

SUBS: Arnaut Groeneveld (on for Brooks, 45') - 6: Threatened with his pace and saw a goal chalked off for offside. Reuters

Harry Wilson (on for Cook, 66') - 5: United were rampant by the time the Welshman came to the party. EPA

Philip Billing (on for Solanke, 66') - 5: Dane knows what it is to suffer relegation with Huddersfield and is likely to experience it again. Reuters

Jack Stacey (on for Smith, 77') - 5: Nothing the defender could do to influence the game. EPA

These were the details of the news Bruno Fernandes 9, Mason Greenwood 8; Junior Stanislas 7 - Manchester United v Bournemouth player ratings for this day. We hope that we have succeeded by giving you the full details and information. To follow all our news, you can subscribe to the alerts system or to one of our different systems to provide you with all that is new.

PREV Premier League clubs vote against use of 5 substitutes next season: BBC
NEXT Former Fifa president Blatter calls for Infantino to be suspended