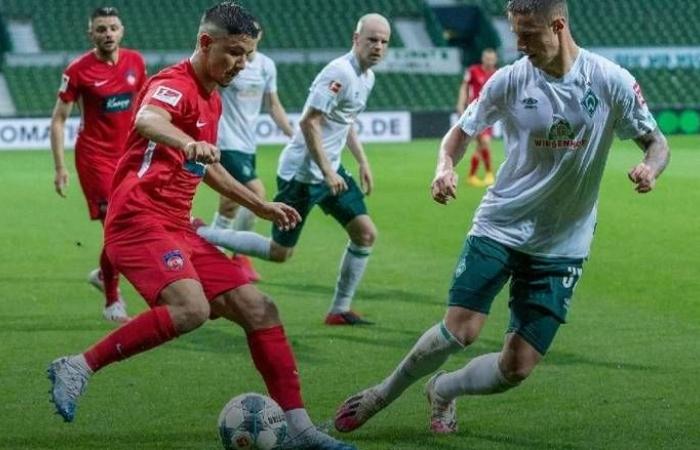 Werder Bremen's Bundesliga future remained in doubt after being held to a 0-0 draw by second-division Heidenheim in the first leg of their relegation-promotion playoff.

Bremen, which finished third from bottom in the top division, will have to do without captain Niklas Moisander for the second leg on Monday after he was sent off late with his second yellow card for a poor challenge.

Florian Kohfeldt's side were relieved not to concede in injury time when Heidenheim defender Timo Beermann headed just wide from Marc Schnatterer's corner.

It was the closest either side came to scoring in a game of few opportunities played in heavy rain from a summer thunderstorm.

Heidenheim, based in southwestern Germany, are bidding to reach the Bundesliga for the first time.

The team have been coached by Frank Schmidt since 2007, making the 46-year-old the longest serving coach at one team in Germany.

Schmidt previously played for the club and took over as coach on an interim basis when Heidenheim was playing at the local fifth-tier Oberliga level.

The team earned promotion in Schmidt's first season and won the fourth-tier regional league for promotion to the third division in his second.

Five seasons later, Heidenheim won the third division for promotion to the second. This is the club's first shot at playing in the top division.

These were the details of the news Bremen's Bundesliga future hanging by a thread after 0-0 with Heidenheim for this day. We hope that we have succeeded by giving you the full details and information. To follow all our news, you can subscribe to the alerts system or to one of our different systems to provide you with all that is new.