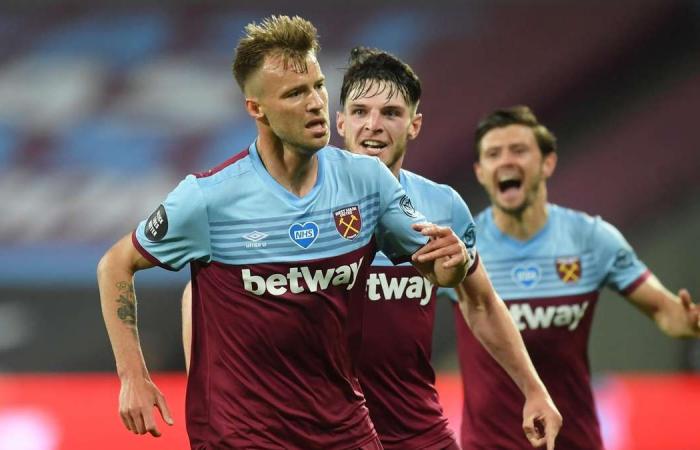 Thank you for your reading and interest in the news Michail Antonio 10 out of 10, Andriy Yarmolenko 8; Antonio Rudiger 4 - West Ham v Chelsea player ratings and now with details

Hind Al Soulia - Riyadh - WEST HAM RATINGS: Lukasz Fabianski – 6. Couldn’t do anything about either Chelsea goal and didn’t have another save to make all night. EPA

Ryan Fredericks – 7. Had his hands full with Alonso and Pulisic but stuck to his task well. EPA

Issa Diop – 6. Tripped Christian Pulisic for Chelsea’s penalty but was solid for the rest of the game. Reuters

Aaron Cresswell – 7. Unable to attack for most of the game but defended well. Reuters

Declan Rice – 6. Fouled Pulisic that lead to Willian’s free-kick but defended well with Chelsea retaining most of the possession. Reuters

Jarrod Bowen – 8. Wonderful corner for Soucek’s header and claimed his second assist with a smart pass in to Antonio. AFP

Michail Antonio – 10. West Ham’s most dangerous threat all night and got his reward by scoring his side’s second goal before setting up the winner. Star man. AFP

Andriy Yarmolenko (78’) – 8. Superb finish to secure his side a precious three points. A classy cameo from a classy player. Reuters

CHELSEA RATINGS: Kepa Arrizabalaga – 5. Another shaky night from the Spaniard. Couldn’t do too much about the goals but he failed to command his area as Chelsea always looked fragile from set pieces. AFP

Cesar Azpilicueta – 4. Lost his battle with Soucek for his equalising goal and was lacking his usual poise and reliability. Reuters

Andreas Christensen – 5. The best of a bad bunch from Chelsea’s defenders, but when your team concedes three goals to a side fighting relegation, then no one deserves good marks. AFP

Antonio Rudiger – 4. Was one of Chelsea’s best passers but he gets paid to defend and he was well short of his best. Easily beaten by Yarmolenko when one-on-one to allow the Ukrainian to score the decisive goal. Reuters

Marcos Alonso – 5. Plenty of endeavour in his attacking forays but never posed much of a threat. Defensively he did OK until leaving his backline horribly exposed on the counter that led to Yarmolenko’s winner. AFP

N’Golo Kante – 5. Typically strong in the tackle and broke up play but left his defence was exposed on the counter-attack. Reuters

Mateo Kovacic – 6. Chelsea’s best midfielder in the first half but was replaced by Mason Mount early after the break as Frank Lampard went more attacking. EPA

Ross Barkley – 5. Anonymous for an hour before making way for Ruben Loftus-Cheek. EPA

Christian Pulisic – 7. Won both set pieces that led to Chelsea’s two goals. Was not afforded the space that allowed him to run at West Ham’s defence but was still his team’s most dangerous attacking player. AFP

Willian – 8. Cool as you like to score the opening goal from the penalty spot before scoring his second with a stunning free-kick. EPA

Tammy Abraham – 3. A night to forget at both ends of the pitch for the striker. Offered no threat in the West Ham area and made a mess of his attempt to clear Soucek’s header. EPA

Olivier Giroud (63’) – 4. Failed to connect with a decent effort and struggled to impose himself on the game. Reuters

Ruben Loftus-Cheek (63’) – 5. Offered Chelsea an outlet between the lines but is still well short of his best after a lengthy injury. Reuters

These were the details of the news Michail Antonio 10 out of 10, Andriy Yarmolenko 8; Antonio Rudiger 4 - West Ham v Chelsea player ratings for this day. We hope that we have succeeded by giving you the full details and information. To follow all our news, you can subscribe to the alerts system or to one of our different systems to provide you with all that is new.