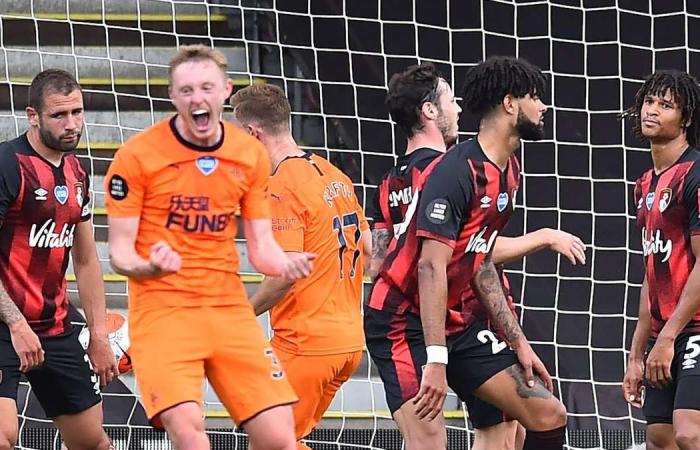 Thank you for your reading and interest in the news Allan Saint-Maximin 9, Miguel Almiron 8; Dominic Solanke 4 ... Bournemouth v Newcastle player ratings and now with details

Hind Al Soulia - Riyadh - BOURNEMOUTH RATINGS: Aaron Ramsdale - 7: Good stops to deny Saint-Maximin and Carroll in second half. No chance for any of the goals as his defence continually abandoned their posts. EPA

Adam Smith - 4: Skinned by Saint-Maximin for second goal, although not the first player to have suffered that fate this season. Reuters

Steve Cook - 5: Thankless task for the defender up against a rampant Newcastle attack. Reuters

Nathan Ake - 5: Looks like Bournemouth are going down, but Ake should find another Premier League home next season. Tried to keep team together but even he struggled. Picked up booking for clumsy challenge from behind on pacy substitute Almiron. Reuters

Jefferson Lerma - 4: Caught in possession by Longstaff which led to opening goal for Newcastle. Confidence visibly drained instantly from the team after just five minutes. PA

Arnaut Danjuma - 5: Dutchman was given the runaround by Newcastle's sparkling midfield and attack. Getty

David Brooks - 6: Tried to make things happen gong forward although left Smith hopelessly exposed against Saint-Maximin, as the Frenchman set up the second goal. Unlucky after shot hit the bar when team were already 3-0 down. Reuters

Joshua King - 4: Thought he had headed one back after Solanke hit the bar in the second half but was well offside. AFP

NEWCASTLE RATINGS: Martin Dubravka - 6: Very little to do. Saw shot from Brooks hit the bar but will be frustrated at Bournemouth's consolation that cost him a clean-sheet. EPA

Jamaal Lascelles - 7: Newcastle captain gave a commanding show at the back. Strong in the air and gave the Bournemouth attackers few opportunities. Reuters

Javier Manquillo - 7: Switched from right to left-back to accommodate Krafth and did well up against pacy opponent in Brooks. Reuters

Jonjo Shelvey - 8: Rested for Manchester City cup defeat and looked refreshed here. Pulled the strings from midfield, some signature switches of play and long passes to feet. Calmly put Lazaro through for the fourth goal. Reuters

Nabil Bentaleb - 8: Cool and composed, neat and tidy from the midfielder on loan from German side Schalke.

Sean Longstaff - 8: Playing in an unusual forward role, helped set up first goal with timely challenge on Lerner, finished superbly into the roof of the net to score the second - but then went off with a muscle problem after half-an-hour. Reuters

Joelinton - 7: Used predominantly down the left and played his part in an impressive Newcastle attacking performance. EPA

Allan Saint-Maximin - 9: Superbly set up the second goal with a breathtaking change of pace that left Smith for dead. One marauding run from one end of the pitch to the other in the second half where it looked like he might go all the way himself. Contributed to three goals out of four. Getty

Dwight Gayle - 8: Missed crucial chance against Manchester City in the FA Cup defeat on Sunday, made up for it here with calm finish just five minutes in after being put through by Saint-Maximin. EPA

Miguel Almiron - (sub Longstaff 33) 8: Superb run and finish from the Paraguayan attacker to make it 3-0. Getty

Andy Carroll - (sub Gayle 62) 7: Usual handful in the air and stung Ramsdale's hands with a thumping shot. Desperate for a goal. Reuters

Valentino Lazaro - (sub Saint-Maximin 62) 8: What a cameo from the on-loan Austrian. Brilliant finish after being put clear by Shelvey, then cracked the crossbar with a fierce strike to nearly make it 5-0. Reuters

DeAndre Yedlin - (sub Manquillo 73) 6: Solid without making an impact when he came on. EPA

These were the details of the news Allan Saint-Maximin 9, Miguel Almiron 8; Dominic Solanke 4 ... Bournemouth v Newcastle player ratings for this day. We hope that we have succeeded by giving you the full details and information. To follow all our news, you can subscribe to the alerts system or to one of our different systems to provide you with all that is new.