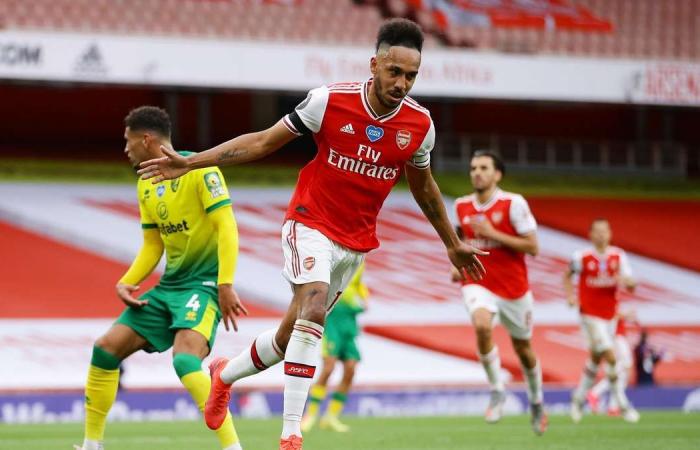 Thank you for your reading and interest in the news Pierre-Emerick Aubameyang 8 out of 10, Cedric Soares 7; Tim Krul 5 - Arsenal v Norwich player ratings and now with details

Sead Kolasinac - 7: Offers balance and stability on the left hand side of Arsenal's back three. Understanding with Tierney ahead of him at wing back looks stronger with each game. Reuters

Shkodran Mustafi - 6: Replaced at half time. Sloppy in possession under no pressure. Reuters

David Luiz - 7: Brazilian was tough in the tackle and assured in possesion. Reuters

Hector Bellerin - 6: Spaniard must feel as if his place is under threat with Cedric Soares signing a long-term deal ... and scoring a screamer to boot. AFP

Granit Xhaka - 7: Swiss scored his first of the season with a superb finish. EPA

Dani Ceballos - 7: Real purpose about the Spaniard since the restart. EPA

Alexandre Lacazette - 6: Frenchman looked a yard off the pace and should have buried at least one of his first-half chances. Reuters

Reiss Nelson - 6: Showed good link-up play with his fellow forwards before coming off early in the second half. Reuters

Pierre-Emerick Aubameyang - 8: Both his goals were gifts but his all-round contribution was terrific. Reuters

Cedric Soares (on for Bellerin, 77') - 7: Portuguese marked his permanent transfer with a debut goal to remember. EPA

Eddie Nketiah (on for Lacazette, 76') - 5: Fresh legs to run at a tired Norwich defence. EPA

Nicolas Pepe (on for Aubameyang, 82') - 5: Ivorian brought on with Norwich already down and out. Reuters

NORWICH CITY RATINGS: Tim Krul - 5: Kept Arsenal at bay with a string of fine saves before his error led to Aubameyang's opener on 33 minutes. Reuters

Max Aarons - 5: Played too close to his centre-backs in the first half allowing Tierney time and space to deliver a string of dangerous balls from the left. EPA

Ben Godfrey - 5: Almost scored a goal-of-the-season contender before Arsenal ran away with it. EPA

Jamal Lewis - 6: Will have been relieved that Arsenal's best attacks came from the opposite flank. Reuters

Tom Trybull - 5: Tireless midfielder never stopped running but looked out of his depth before being replaced at the interval. EPA

Lukas Rupp - 6: Another who put in a shift without much reward. EPA

Emi Buendía (not pictured) - 5: Spaniard neither excelled as an attacking or defensive force. EPA

Kenny McLean - 6: Thought he had scored with a wonderful free kick only to see Martinez fling himself across goal to palm out for a corner. EPA

Todd Cantwell - 7: An energetic display against the club he supported as a boy. Head and shoulders above his teammates. EPA

Teemu Pukki - 5: Ploughed a lone farrow up front but the Finn has now gone 10 games without a goal. EPA

SUBS: Onel Hernandez (on for Buendia, 45') - 6: All of Norwich's second-half subs were an improvement with the Cuban-born German doing his chances of more regular football no harm at all. AFP

Josip Drmic (on for Tryball, 45') - 5: Looked to make things happen from midfield, but with little joy. EPA

Adam Idah (on for Pukki, 45 ') - 5: Offered more muscle than Pukki but never looked like scoring. AFP

Marco Stiepermann (on for Cantwell, 75'): No chance to make an impact with damage limitation the order of play. Reuters

These were the details of the news Pierre-Emerick Aubameyang 8 out of 10, Cedric Soares 7; Tim Krul 5 - Arsenal v Norwich player ratings for this day. We hope that we have succeeded by giving you the full details and information. To follow all our news, you can subscribe to the alerts system or to one of our different systems to provide you with all that is new.