Arjen Robben, Carlos Roa, Johan Cruyff and others who came back from retirement - in pictures 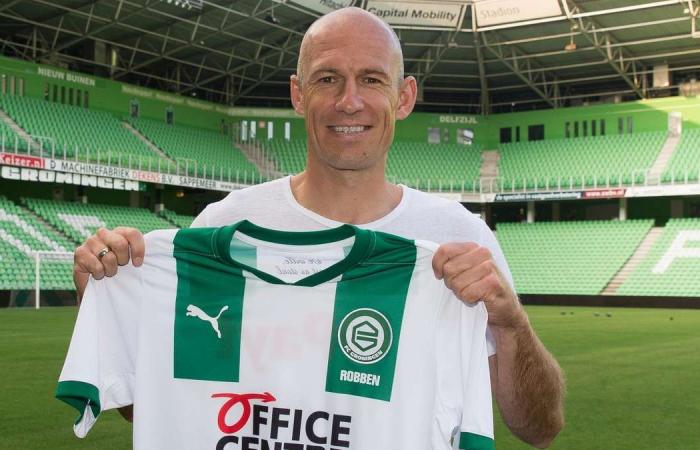 Thank you for your reading and interest in the news Arjen Robben, Carlos Roa, Johan Cruyff and others who came back from retirement - in pictures and now with details

Hind Al Soulia - Riyadh - Arjen Robben: The Dutch winger announced last week that he is preparing to come out of retirement at his formative club Groningen. After leaving Groningen, where he made his debut aged 16, in 2002, Robben won league titles with PSV Eindhoven, Chelsea and Real Madrid before a hugely successful decade with Bayern Munich. He retired from Bayern a year ago at the age of 35, having helped the club to eight Bundesliga titles as well as the 2013 Champions League. Robben, a World Cup finalist in 2010, won won 96 Netherlands caps. Reuters

Stephen Carr: The Irish defender called time on his career on December 1, 2008 after being released by Newcastle United earlier that summer. His first retirement lasted only two months, however, as he signed a short-term contract at Birmingham City where he would spend another four years - captaining them to a League Cup title in 2011 - before injury forced him to hang up his boots for good. Getty Images

Johan Cruyff: The Dutch legend called time on an illustrious career in 1978 before returning to football for financial reasons a year later, having reportedly been scammed in Spain with false investments. Cruyff joined the Los Angeles Aztecs in the North American Soccer League followed by spells at the Washington Diplomats, Levante before a successful return to Holland with boyhood club Ajax and Feyenoord. Allsport

Carlos Roa: After starring for Argentina at the 1998 World Cup in France, Roa took time out from football the following summer to take a religious retreat, despite reaching the final of the Copa Del Rey and Cup Winners’ Cup and winning the Spanish Supercup at Mallorca. A practising Seventh-Day Adventist, Roa refused to sign a contract extension at the Spanish club because he believed the world was going to end. When it didn’t, he returned with his tail between his legs to play out the final two years of his contract. He never recaptured the form that earned him 16 international caps, and called time on his career a second time in 2006 following a year at Olimpo in his native Argentina. Allsport

Paul Scholes: Six months after announcing his retirement in January 2008, Scholes was named on the bench for the Manchester derby by Alex Ferguson. The move took even his own teammates by surprise, but Scholes quickly shook off any rust to impress his influence upon the Red Devils. Scholes ended up making 21 appearances in the second half of the season and then stayed on for another year as United won back the Premier League title before Scholes called it a day for good, along with Ferguson. Getty Images

Jens Lehmann: The German left Arsenal in 2008 having been part of the 2003 'Invincibles' and retired two years later while at Stuttgart. Lehmann, who was sent off in the 2006 Champions League final defeat to Barcelona, answered an SOS from Gunners manager Arsene Wenger in 2011 when three of the Frenchman's keepers were injured. Lehmann put aside his feud with Manuel Almunia to sign as back-up, but after the Spaniard was injured in the warm-up ahead of a clash with Blackpool, the 42-year-old stepped in and played his part in a 3-1 win. Getty Images

Roger Milla: To think we may never have got to see that famous wiggle goal celebration by the corner flag, if Milla had his way. The Cameroon striker attempted to retire a year before his heroics at Italia ’90, initially bringing his playing career to an end in 1989. Milla moved to the Indian Ocean island of Reunion but was called back for duty by Cameroon’s president Paul Biya. Not content with the one World Cup, the forward carried on playing until the next, and at the age of 42 he was the oldest player to appear in the competition. His final international appearance came in a friendly against South Africa in December 1994 before Milla played his last club match in Indonesia two years later. Getty Images

Landon Donovan: The only player on this list to come out of retirement twice. MLS’ all-time top scorer first retired in 2014 but was asked to return in 2016 by Los Angeles Galaxy, the club where he made his name, while working as a TV pundit on a game which saw three first-team Galaxy players go off injured. He couldn’t help them to yet another MLS title though, and the two-time Everton loanee retired once more at the end of the season. On January 12, 2018, Donovan signed with Liga MX team Club Leon, playing six games. AFP

Marc Overmars: After a distinguished career turning out for Ajax, Arsenal, Barcelona, the Dutch national team, the flying winger was forced to retire in July 2014 due to a persistent knee injury. However, a fine performance in Jaap Stam’s testimonial match earned him invites from several German and Dutch clubs to rethink his decision to stay retired. In August 2008, Overmars announced his comeback with Dutch club Go Ahead Eagles. His comeback lasted only one season before Overmars called time again due to knee problems. Allsport

These were the details of the news Arjen Robben, Carlos Roa, Johan Cruyff and others who came back from retirement - in pictures for this day. We hope that we have succeeded by giving you the full details and information. To follow all our news, you can subscribe to the alerts system or to one of our different systems to provide you with all that is new.