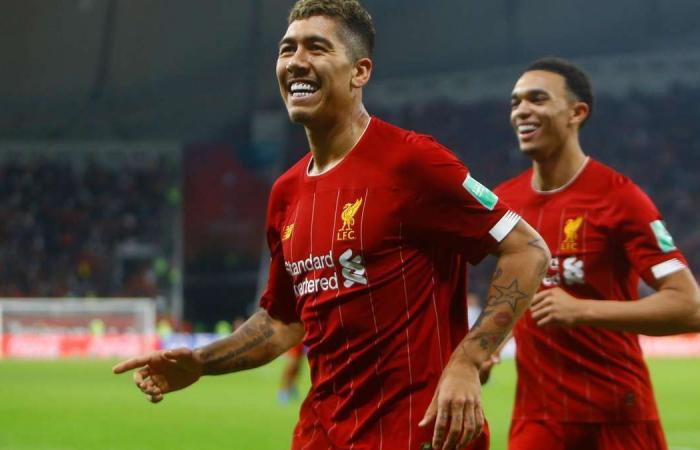 Hind Al Soulia - Riyadh - A day after Liverpool crashed out of the League Cup, they carried through to the Fifa Club World Cup final.

Where the European champions’ youth side came a cropper at Aston Villa, the senior team crafted just about enough to see off Monterrey in Doha.

It took an injury-time winner to do it. Substitute Trent Alexander-Arnold set up fellow non-starter Roberto Firmino, and Liverpool sent their Mexican opponents packing.

A 2-1 victory was expected but exacting. Once the dust had settled, Liverpool had advanced to a showpiece showdown on Saturday with Brazil’s Flamengo, where the Premier League leaders will need to vastly improve.

It all began pretty well on Wednesday. About 12 minutes in, Liverpool made their mark.

It continued a trend: the midfielder had struck in a third successive appearance, as many as he managed through the whole of last season.

But Liverpool’s lead was short-lived and two minutes later, the English side failed to deal with a free kick.

Alisson saved well from Jesus Gallardo’s volley but could not prevent Rogelio Funes Mori sliding the ball into the empty net for his 100th goal with the club.

From there, James Milner, making his 200th appearance for Liverpool, forced a strong save at close range from Marcelo Barovero in the Mexican goal, while Alisson had to twice repel Dorlan Pabon. The first required firm wrists.

His absence prompted Jurgen Klopp to rejig his back line. Captain Jordan Henderson filled in alongside Joe Gomez, a central midfielder taking his turn as centre back. To his right, Milner started instead of Alexander-Arnold.

Pabon would test Alisson again, not long into the second half; first, through a whipped free kick from the edge of the Liverpool penalty area, then from range on the right.

Although obvious underdogs, Monterrey’s threat was evident. At the other end, Keita slalomed past a couple of opponents, but fired straight at Barovero.

By then, Klopp had clearly seen enough. Sadio Mane was introduced, much to the delight of most inside the Khalifa International Stadium. But still Alisson had to stand firm as Monterrey sensed an upset.

With 15 minutes remaining, Liverpool should have seized back their advantage. But Divock Origi snatched at Milner’s centre, the ball ricocheting off Mane on its way beyond the byline.

Moments later, Klopp and Antonio Mohamed, the Monterrey manager, were booked for verbals on the touchline.

With extra-time looming, Liverpool found that additional quality. Alexander-Arnold's low cross was turned in by Firmino, and the favourites' immediate future was forged.

On Saturday, they can become champions of the world.

These were the details of the news Liverpool beat Monterrey 2-1 in Doha to reach Fifa Club World Cup Final for this day. We hope that we have succeeded by giving you the full details and information. To follow all our news, you can subscribe to the alerts system or to one of our different systems to provide you with all that is new.