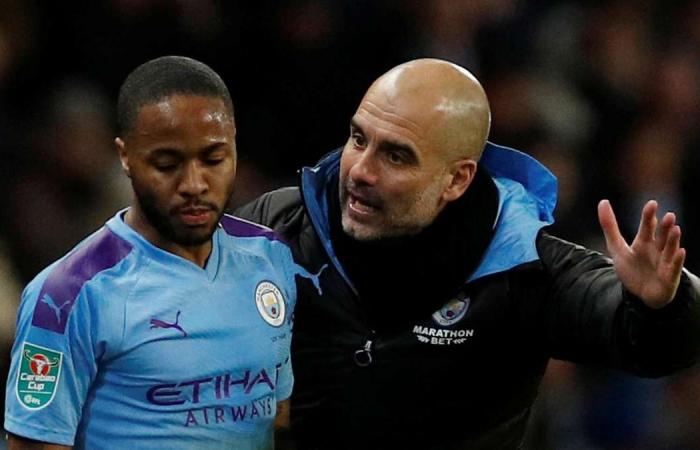 The 25-year-old England international, who is under contract at the Etihad until 2023, described the 13-time European champions as a "fantastic club" in an interview with Madrid-based sports daily AS.

"Right now I'm at City and I'm really happy. But I say Real Madrid are a fantastic club," Sterling told Spanish outlet AS.

"When you see the white shirt you know exactly what the club stands for, it's massive."

The forward was photographed with a City shirt on one shoulder and a Madrid shirt on the other.

City and Real meet in the first leg of their Champions League last-16 tie at the Bernabeu Stadium next week, so the timing of Sterling's interview has provoked some interest.

Guardiola says he is not worried about Sterling's commitment, although the player's future will be under scrutiny if the club fail in their appeal against a two-year ban from European competitions for breaching UEFA's financial fair play rules.

Guardiola said Real and Barca, the club he used to play for and manage, were true giants of the European game.

"All the clubs have to know that when Real Madrid or Barcelona knock on the door the other clubs must tremble," he said. "They will be in a little bit of trouble.

"Barcelona and Real Madrid are maybe the strongest and most powerful teams in terms of their history and how good they are. That is normal and I understand completely."

Sterling, who is recovering from a hamstring injury and is unlikely to feature in Saturday's Premier League match at Leicester, has emerged as one of Guardiola's key players during his four seasons in charge in Manchester.

"You just see the commitment from Raheem every single day when he arrives," he said.

"His commitment is there in every game, offensively and defensively, so he's one of the best players in the world and it's normal that big clubs see his desire for the team.

"I don't know if Madrid or Barcelona call his agent, but I don't have any doubts about his commitment from the first day to the last day that Raheem and other ones have had and will have until the end."

Guardiola, whose second-placed side are 22 points behind runaway leaders Liverpool, has also reaffirmed his own desire to remain at City.

"I'm working with exceptional players especially, and I have the feeling that they follow us 100 per cent," he said.

"I know how it's not easy working with us and with me, but I'm happy. When I move on it's always because I am thinking I can be happier than the place that I was before. That is the only reason."

Despite a potential two years without Champions League football, Guardiola said he was content in Manchester and would talk to owner Khaldoon Al Mubarak about extending his contract, which runs out after next season.

"I feel I am with a club where we have incredible owners and a good relationship," said the Catalan.

"I think it will not be a problem to understand both sides if we decide to stay three more years, or stay in the time we are together.

"With Khaldoon, we are going to talk at the end of the season or in the middle of next season and we will see."

These were the details of the news Pep Guardiola admits clubs 'tremble' if Real Madrid or Barcelona show interest after Raheem Sterling talks of his admiration for Los Blancos for this day. We hope that we have succeeded by giving you the full details and information. To follow all our news, you can subscribe to the alerts system or to one of our different systems to provide you with all that is new.