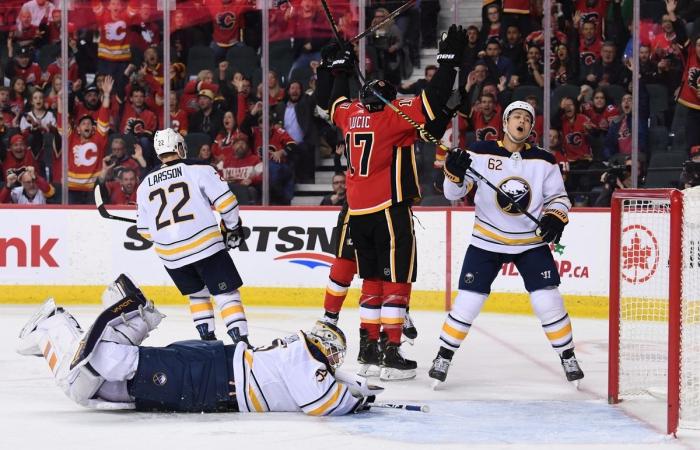 Aden - Yasmine El Tohamy - Milan Lucic scored his first goal for Calgary, and the Flames held on to beat the Buffalo Sabres 4-3 Thursday night.
Tobias Rieder, Johnny Gaudreau and Sean Monahan also scored for the Flames, who are 4-0-1 in their last five games. Monahan also had an assist for his first multipoint game since Nov. 7.
Interim coach Geoff Ward improved to 3-0-0 since taking over for Bill Peters.
Sam Reinhart, Jake McCabe and Jack Eichel scored for Buffalo, which earned at least one point in its previous four games. Eichel extended his point streak to 11 games (10 goals, 10 assists).
The Saddledome crowd roared at 3:58 of the third period when Lucic finished off a passing sequence with Derek Ryan and Dillon Dube for his first goal in 29 games dating to last season with Edmonton. Choruses of "Looo" echoed throughout the building as Lucic hugged his linemates in the corner after putting Calgary ahead 4-1.
The goals by McCabe and Eichel came in the last three minutes - Eichel's with the goaltender pulled - to set up a furious finish.
David Rittich made 26 saves to improve to 13-7-4. Linus Ullmark, who had 25 stops, fell to 7-6-2.
After successfully killing off three straight first-period power plays for the Sabres, the Flames tied it 1-all at 16:42 by converting their first man-advantage.
Set up by Monahan, Gaudreau skated to the faceoff dot and ripped a shot into the top corner for his sixth goal of the season.
Gaudreau, who scored 36 times last season, entered without a goal in 10 games and with just two in his past 24 games.
Rieder's short-handed goal at 11:18 of the second broke the tie. Sprung on a breakaway by Ryan, Rieder sped in on Ullmark and on a deke, neatly slid the puck through the pads of the Buffalo goaltender.
At 15:02, Calgary surged in front 3-1 when Mikael Backlund set up Monahan for a one-timer from a sharp angle. It was the seventh goal of the season for Monahan, who is coming off consecutive 30-goal seasons.
Gaudreau and Monahan snapped out of their slumps on a night when Ward reconfigured his top two lines. Separated to start the game, Gaudreau and Monahan were later reunited - but with a new winger in Backlund.
Meanwhile, Elias Lindholm, the other longtime member of Calgary's top line, shifted to center and skated between Matthew Tkachuk and Andrew Mangiapane.
Buffalo opened the scoring 3:29 into the first period when Reinhart redirected Rasmus Ristolainen's point shot past Rittich.
NOTES: Flames D Travis Hamonic (lower body) returned to the lineup after missing six games. ... Calgary improved to 9-3-1 against Eastern Conference opponents.
UP NEXT
Sabres: At the Vancouver Canucks on Saturday.
Flames: Host the Los Angeles Kings on Saturday night.

These were the details of the news Lucic scores 1st goal with Flames in 4-3 win over Sabres for this day. We hope that we have succeeded by giving you the full details and information. To follow all our news, you can subscribe to the alerts system or to one of our different systems to provide you with all that is new.