Joshua, Ruiz ready for 'Clash on the Dunes' 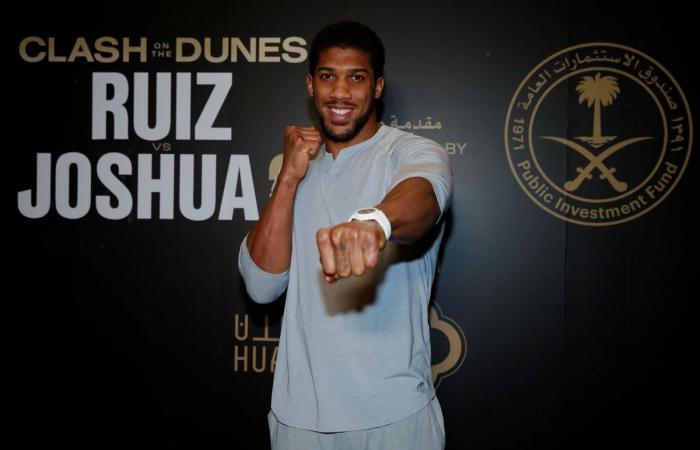 Thank you for reading the news about Joshua, Ruiz ready for 'Clash on the Dunes' and now with the details

Aden - Yasmine El Tohamy - Anthony Joshua faces the biggest test of his boxing career on Saturday as he attempts to reclaim his world heavyweight crown from Andy Ruiz in a rematch in Saudi Arabia.
Six months after suffering a shock knockout defeat to Ruiz at Madison Square Garden, Joshua will climb back into the ring with Ruiz seeking to win back the IBF, WBA, and WBO titles.
A leaner, meaner Joshua told reporters this week he is "hungry, determined and focused" for a bout that is expected to get under way at around midnight local time (1am on Sunday).
The stakes could not be higher for Joshua, who would face a long road back to the pinnacle of the heavyweight division if he loses a fight being hyped as "Clash on the Dunes."
Victory, by contrast, would re-establish his credentials in the division, opening the door to money-spinning fights against WBC champion Deontay Wilder or fellow Briton Tyson Fury.
"I am not here to put on a show, I am here to win," Joshua (22-1, 21 knockouts) said.
Joshua has blamed a "lack of experience" for his defeat to Ruiz in June, when he was knocked down four times en route to a seventh-round stoppage.
For the rematch, the 6ft 6in (1.98m) Joshua has invested heavily in quality sparring partners, hiring boxers of similar stature to the 6ft Ruiz to prepare for the fast-handed Mexican-American.
"We had to bring in hard, rough sparring partners," Joshua said. "I brought in the toughest and roughest."
Joshua is also believed to have shed considerable bodyweight for the fight.
In June, Joshua weighed in at 247.8 pounds (112.4 kg) but has said this week he expects to tip the scales significantly lighter, having cut muscle bulk in order to improve his mobility around the ring.
"I may be less than 17 stone (238 pounds)," Joshua said of his expected weight.
"Before I was trying to bench press a house. I used my body to get where I needed but then I started realising the sweet science of the sport," he said. "I am punching like a horse kicking backwards right now."
Ruiz, whose slick, swarming combinations rocked Joshua in their first meeting, says he is ready for the Briton's likely change of tactics.
"I know (Joshua) is going to come with a different game plan, I know he's prepared and I know he's motivated," said Ruiz (33-1, 22 knockouts).
"I know he's lost weight and will try to box me around, but it's just my job to prevent that. I'm ready for whatever comes my way."
Win or lose, Saturday's eagerly anticipated heavyweight battle could signal the dawn of a new era for boxing.
The rematch will be taking place in a purpose built 15,000-seat arena in Diriyah on the outskirts of the Saudi capital Riyadh.
Matchroom boss Eddie Hearn believes Saudi Arabia has the potential to rival Las Vegas as a venue for boxing's biggest fights.
"Every boxer and every manager wants to fight here," Hearn told The Guardian newspaper.
"(Manny) Pacquiao and Canelo (Alvarez) are coming. The talk is (Floyd) Mayweather is too. They want a piece of the action.
"The plan is to make Saudi Arabia the home of mega boxing. All due respect to Las Vegas, but this place has the ability to bring any fight they want here."

These were the details of the news Joshua, Ruiz ready for 'Clash on the Dunes' for this day. We hope that we have succeeded by giving you the full details and information. To follow all our news, you can subscribe to the alerts system or to one of our different systems to provide you with all that is new.