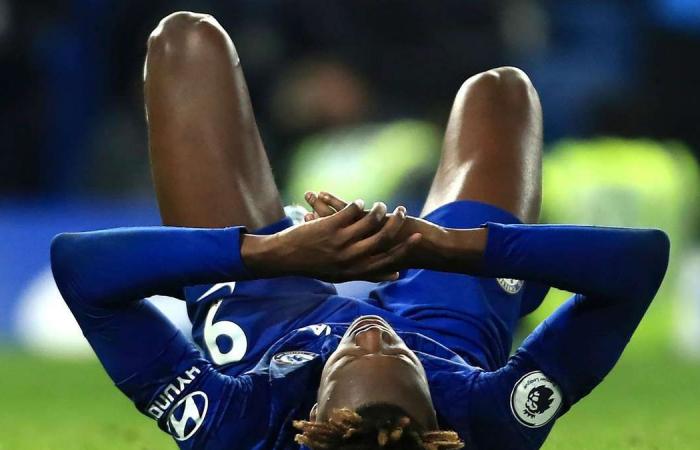 Hind Al Soulia - Riyadh - Frank Lampard believes Chelsea have the firepower to cope after striker Tammy Abraham was carried from the pitch during Chelsea's frustrating draw with Arsenal.

Abraham was helped off with an ankle injury as Chelsea twice blew the lead against ten-man Arsenal in the 2-2 draw at Stamford Bridge.

Hector Bellerin fired Arsenal to a share of the points after Cesar Azpilicueta's late strike looked to have earned the Blues victory.

David Luiz was sent off against his former club with Jorginho slotting a penalty for Chelsea, but Gabriel Martinelli hit back for the Gunners in a turbulent London clash.

When asked if Chelsea could cope without Abraham, who has 13 Premier League goals this season, Lampard said: "Yes, yes; and we have the players there to do that.

"I hope he's not (out for several weeks), but then if he is then yes, we do have the players.

"He has had ice on his ankle, but I haven't spoken to him yet so I don't know."

Chelsea boss Lampard refused to dampen down links to want-away Paris St Germain striker Edinson Cavani on Monday, and injury to Abraham could increase the Blues' need to recruit a striker in the January window.

Olivier Giroud wants to join Inter Milan to link up again with ex-Blues boss Antonio Conte, while Chelsea also have Michy Batshuayi as their other frontline striker.

Lampard stressed Chelsea are more likely to look at loan deals than permanent transfers, as he plots his long-term strategy at the club.

"I know and I feel where we need strengthening," said Lampard. "It's not going to be just January, this is more of a short-term window for us.

"This season has given us some answers on the pitch in where we need to improve. But that's not so much for this window."

Lamenting his side's inability to seal victory against Arsenal's 10 men, Lampard added: "At that point when you go 2-1 up, you've got to get the basics right.

"The second goal was soft, it's soft for a right-back to cut inside and roll it into the far corner. We have to be honest about that."

Luiz was sent off for shoving Tammy Abraham in the penalty area as the Chelsea striker looked set to score following a terrible backpass by Shkodran Mustafi when the game was goalless.

Arteta, the former Gunners midfielder, admitted his relief at holding his nerve and allowing the 18-year-old Brazilian to stay on the field.

"I was thinking about that, and then I thought 'I don't want to send that message to the team'. I wanted to keep us as we were and give us a chance.

"I asked the players to be accountable for what they do. So it was a great response from them.

"To play in this stadium the way he has, and with 10 men for us, it's fantastic, especially against Azpilicueta who I think is one of the best full-backs in the league.

"This shows the character, the fight and the leadership of the players. You have to really stand up in this kind of situation.

"I told them when someone makes a mistake, that can happen, but what cannot happen is that we do not stand up.

"But everyone did. Everyone believed at half-time we could stand up, and we did.

"I wasn't expecting Hector to score with his left foot obviously! But I'm very happy."

These were the details of the news Chelsea may be forced into market as injured striker Tammy Abraham is carried off after Arsenal draw for this day. We hope that we have succeeded by giving you the full details and information. To follow all our news, you can subscribe to the alerts system or to one of our different systems to provide you with all that is new.