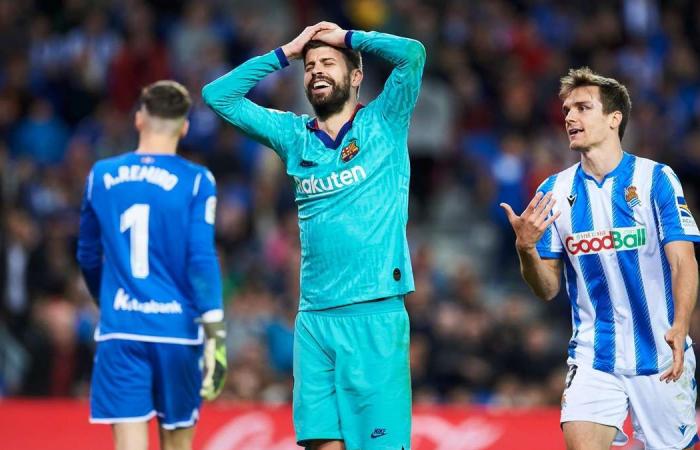 Hind Al Soulia - Riyadh - Barcelona gave Real Madrid a big opportunity to climb to the top of the La Liga table ahead of the el clasico after they were held to a 2-2 draw at Real Sociedad on Saturday.

While Barcelona still top the table with 35 points from 16 games, Real Madrid – who are on 34 points – can take top spot if they win at Valencia on Sunday.

An error by goalkeeper Marc-Andre ter Stegen gifted Sociedad an equaliser in what was a match between two of the most attacking teams in La Liga.

Antoine Griezmann and Luis Suarez looked to have turned the game around after Mikel Oyarzabal scored an early penalty. However, Sociedad claimed a point after Ter Stegen's error gave Alexander Isak an easy chance to score.

Madrid will pull two points clear at the top if they win on Sunday, which will be a psychological boost ahead of Wednesday's big match. Sociedad move to within three points of Sevilla in third.

Barcelona struggled to catch up for much of the first half an hour as Sociedad moved the ball quickly, with Martin Odegaard – on loan from Real Madrid – the architect.

Odegaard gave Sergio Busquets a tough time as Barcelona were opened up through the middle multiple times.

The home goal came from a corner as Busquets was seen tugging Diego Llorente's shirt. The offence seemed minor but referee Javier Alberola had other ideas. Oyarzabal made no mistake from the spot.

In the 38th minute, Barcelona leveled as Suarez freed Griezmann, who drew the goalkeeper before scooping into the net.

Barcelona improved in the second half. Busquets clipped the ball over Llorente, who stepped up at the wrong time, allowing Lionel Messi to skip free. He sidefooted left to Suarez, who had an open goal.

Pique almost made it 3-1 but his header was cleared by Mikel Merino. Instead Real Sociedad drew level. Monreal's cross created confusion and Ter Stegen parried the ball to Isak, who did not make a mistake.

Pique thought he deserved a penalty in injury-time as he and Llorente were both guilty of pulling each other's shirt at the back post.

"Both teams had our moments and our chances and either side could have scored a third goal," Griezmann said later.

"It's a shame we could only draw. We gave everything but now we have to learn, improve and focus on the clasico. They made a very good start and we got our tactics wrong but in the end we fixed it and we created chances to win the game."

These were the details of the news Barcelona hand Real Madrid golden chance to top the table ahead of clasico for this day. We hope that we have succeeded by giving you the full details and information. To follow all our news, you can subscribe to the alerts system or to one of our different systems to provide you with all that is new.