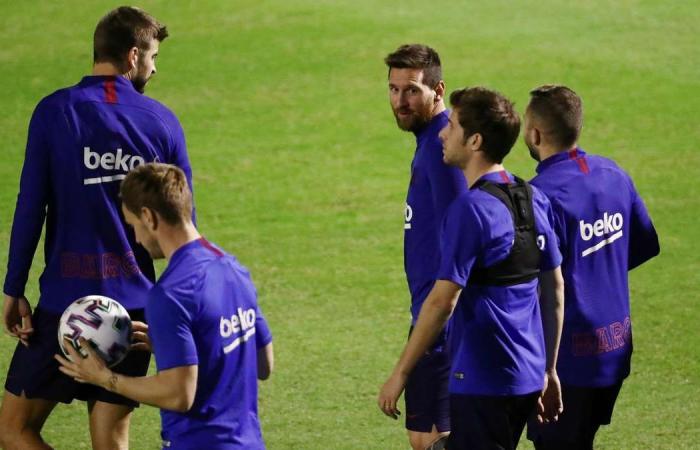 Hind Al Soulia - Riyadh - Barcelona manager Ernesto Valverde was quick to remind his players of the threat posed by Atletico Madrid ahead of their Spanish Super Cup clash in Saudi Arabia on Thursday night.

The Spanish champions, 13-time winners of the title, take on Diego Simeone’s in-form side at Jeddah’s King Abdullah Sports City in the extended competition’s second semi-final, with the winner progressing to Sunday’s showpiece.

Barcelona, currently joint top of La Liga with cup counterparts Real Madrid, are unbeaten in their past 19 league matches against Atletico, although the capital club, currently third in the domestic standings, have during that time eliminated the Catalans from the Uefa Champions League.

And, even though recent history suggests Atletico have their work cut out, Valverde realises the size of the task that faces his men come Thursday.

“This Super Cup is different to all the other ones, because here if we lose we go back home,” the Spaniard said. “The game against Atletico will be difficult, as these games against Atletico always are. They are a very difficult team.”

Barcelona arrived late to training at Al Ittihad club in central Jeddah on Wednesday, when their driver mistakenly took the squad instead to Al Ahli club, the location of Atletico’s media briefing.

Once they had pitched up at the right destination, Valverde put his players through their paces in front of a heavy press presence, before facing the media and joking that he and his team now knew the city as well as they possibly could.

Looking at the match, the Barcelona manager said he had still not decided whether to start with his regular first-choice line-up – injuries permitting – or give minutes to those outside the usual starting XI.

Some changes are enforced, however, with Barcelona without first-choice goalkeeper Marc-Andre ter Stegen, who has to sit out the tournament as he tries to overcome a persistent knee injury.

The German missed Saturday’s 2-2 draw in the derby away to Espanyol. His replacement, summer signing Neto, made his debut at the RCDE Stadium and is expected to start against Atletico.

Meanwhile, midfielder Arthur and winger Ousmane Dembele have also not been included the 24-man squad, which features a number of youngsters, including Riqui Puig and Ronald Araujo.

Barcelona are currently battling for a record-extending 14th La Liga title. They clinched the most recent crown in 2018, in Morocco, before the competition moved to Saudi.

The first of a three-year deal with the Kingdom’s General Sports Authority said to be worth €120 million (Dh490m), the Super Cup has been expanded to four teams from its traditional two. Madrid, 10-time winners, took on Copa del Rey champions Valencia at King Abdullah Sports City late on Wednesday night.

Asked about the new format, which has drawn heavy criticism from inside Spain, Valverde said: “Football is always looking for new means of making money; last time we were in Morocco and this year we’re here. I don’t know if it [has attracted criticism] because it has always been that way and we are just used to it.

"I thought the old format was good, but it’s changed. Maybe we will have a look at it once it’s over, but when you’re up against phenomenal opponents that makes it more of a spectacle.”

Valverde was also quizzed on his side’s first half to the domestic campaign, in which they have been defeated three times from 19 games already, despite sitting at the summit by dint of goal difference. Last season, they lost three matches in all.

“Everyone sees everything in a different way,” Valverde said. “We haven’t had too many ups and downs. We haven’t got the same amount of points as last season, but we’re top, we finished first in our Champions League group and we retain the opportunity to win every trophy this season.”

On speculation regarding Arturo Vidal’s future, he said: "Arturo is playing for us. And tomorrow he’s going to be on the pitch or on the bench. Just like we’re not thinking about other players outside the club, we’re focused on players who are with us at the moment.”

These were the details of the news Ernesto Valverde reminds Barcelona about Atletico Madrid threat ahead of Spanish Super Cup in Saudi Arabia for this day. We hope that we have succeeded by giving you the full details and information. To follow all our news, you can subscribe to the alerts system or to one of our different systems to provide you with all that is new.