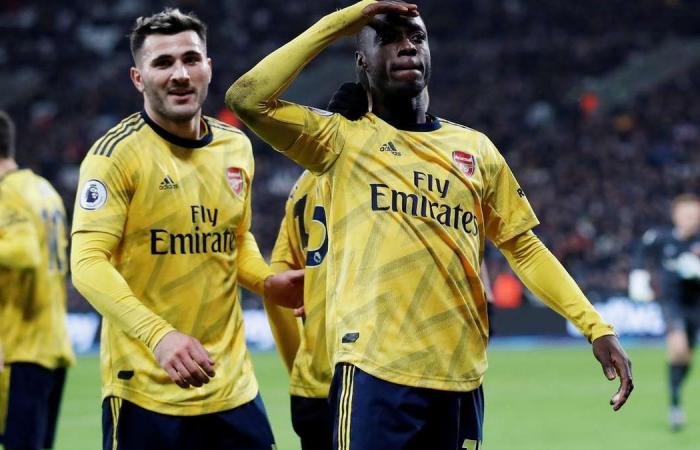 Thank you for your reading and interest in the news 'He'll get better and better': Nicolas Pepe shines as Arsenal end worst winless run since 1977 ends at West Ham and now with details

Hind Al Soulia - Riyadh - Arsenal brought their nine-match winless run to a halt at neighbours West Ham United on Monday with caretaker manager Freddie Ljungberg saying a weight has been lifted off the players' shoulders.

A three-goal blitz in nine second-half minutes secured a 3-1 at the London Stadium to end the Gunners' worst winless run in 42 years.

The outcome looked bleak for Ljungberg and his players at the interval as the visitors trailed to Angelo Ogbonna's deflected header.

Arsenal were sparked into life on the hour though as Gabriel Martinelli scored his first Premier League goal before record signing Nicolas Pepe curled home a brilliant second before crossing for Pierre-Emerick Aubameyang to secure all three points.

"It means so much for the players. They have been living under enormous pressure and you see it in their performances," said Ljungberg.

"You can see the players have been a bit low and you see in the dressing room the relief and how happy they are."

After a draw at Norwich City and a home defeat to Brighton last time out, Ljungberg made five changes with Martinelli and Pepe named in the starting XI.

Pepe has thus far struggled to live up to his £72 million (Dh348m) price tag since joining from Lille in the summer but the Ivorian gave the Arsenal fans a much-needed reminder of his attributes on Monday, curling in for his first league goal from open play.

"Nicolas is an amazing football player, but it is not easy to come from the French league into the Premier League and adjust straight away," added Ljungberg.

"It was an amazing goal and he'll get better and better."

Not much had improved in Ljungberg's first two games since replacing the sacked Unai Emery and it was the same tame and lifeless Arsenal for the first hour against a West Ham side that have won just once in their last 11 games.

"I think we dominated the game for 60 minutes and after that in 10 minutes we lose the game," said West Ham manager Manuel Pellegrini, who is under increasing pressure as his side sit just one point above the relegation zone.

Another home defeat means the Hammers have taken just one point from their last five games at the London Stadium and the home side were booed off at full-time.

"You understand the boos because the last five games we played here we didn't win," added Pellegrini. "You cannot concede three goals in every game."

These were the details of the news 'He'll get better and better': Nicolas Pepe shines as Arsenal end worst winless run since 1977 ends at West Ham for this day. We hope that we have succeeded by giving you the full details and information. To follow all our news, you can subscribe to the alerts system or to one of our different systems to provide you with all that is new.