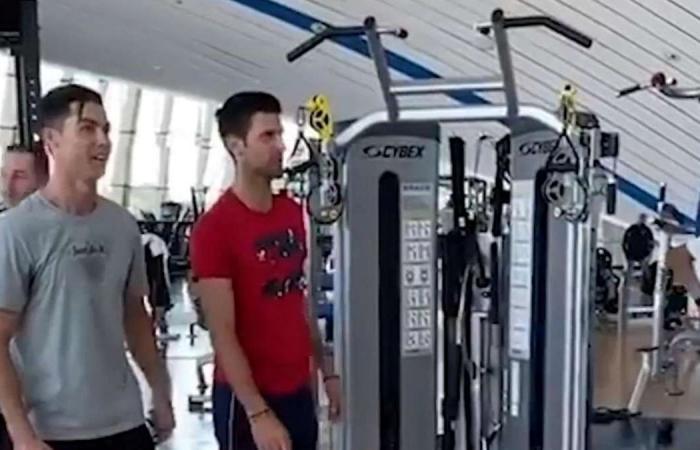 They are both head and shoulders above their rivals, but who can jump the highest?

Cristiano Ronaldo and tennis legend Novak Djokovic were filmed having a friendly contest in a Dubai gym.

Ronaldo, the Portuguese superstar who played for Juventus in the Italian Super Cup in Saudi Arabia last week, was teaching his friend Djokovic how to leap and head the ball.

“Teaching Novak Djokovic how to jump! Was a pleasure to see you and train with you my friend!!” Ronaldo said in an Instagram post.

Ronaldo has been shortlisted for the Dubai Globe Soccer Awards, which will be held along side the 14th Dubai International Sports Conference.

Ronaldo has found his scoring touch for Juventus and netted with an amazing header to secure a 2-1 victory for Juventus at Sampdoria.

He was also among the Juve stars playing in the Italian Super Cup to wear the first ever football shirt to feature traditional Arabic calligraphy.

Djokovic took part in the Mubadala World Tennis Championship in Abu Dhabi recently as he started his preparation for the Australia Open in January.

These were the details of the news Cristiano Ronaldo teaches Novak Djokovic how to score a goal in Dubai for this day. We hope that we have succeeded by giving you the full details and information. To follow all our news, you can subscribe to the alerts system or to one of our different systems to provide you with all that is new.