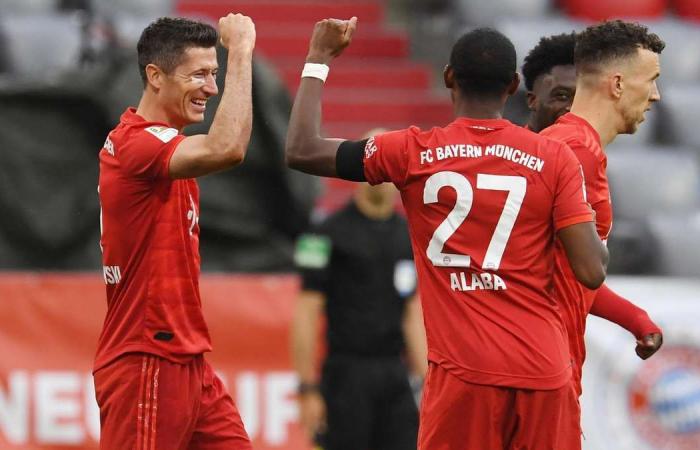 So much for behind-closed-doors matches doing favours for the away team. Eintracht Frankfurt’s previous nine visits to a full Allianz Arena, home of Bayern Munich, had ended in defeat, and although they have a habit, recently, of upsetting the German champions elsewhere, a silent audience was no alibi for Eintracht on Saturday.

Take out the three-and-a-half minute spell in which Eintracht reduced the arrears from 3-0 to 3-2, and Bayern were dominant. Thomas Muller choreographed an excellent first 50 minutes, in which he set up Leon Goretzka’s opener, scored himself and then had a role in Robert Lewandowski’s 27th Bundesliga strike of the season.

Alphonso Davies, and Martin Hinteregger, with an own goal, would swell the scoreline to 5-2 but only after Hinteregger had twice exposed a Bayern fragility defending corners.

Borussia Dortmund will note that tendency as they prepare to take on Bayern on Tuesday, a second-versus-first contest that, with four points separating the clubs in the table, will be highly charged, empty seats or not.

The restart of the Bundesliga has not been kind to Eintracht. That’s eight goals conceded now in 180 minutes since the coronavirus-imposed pause. They might have conceded four or five in their first 45 at the Allianz, so dominant were Bayern, and so readily did the champions create opportunities. And chances of all types, too.

Among Bayern’s many virtues is that theirs is a squad where almost every footballer commands a number of roles, and can switch easily between them.

Among the revelations this season, the development of teenager Alphonso Davies as a left-back. The Canadian had arrived as a winger, Bayern excited above all by his pace.

His speed is startling, and effective, but it has become a fuller asset in his new job. He is as quick to recover possession as a defender as he is when he alarms opposing full-backs.

Or take Benjamin Pavard, the France right-back, whose strengths as a target man are becoming a key part of Bayern’s armoury. Pavard headed home Bayern’s second goal in the 2-0 win at Union Berlin a week ago, from a Joshua Kimmich corner. Here, Pavard, adventuring far beyond his full-back position, met a cross from Kimmich - himself as accomplished as a full-back or a midfielder - that only a reflex save from Kevin Trapp kept out.

That was in the 14th minute, and added to a catalogue of early chances. Davies and Kingsley Coman had put Eintracht into early retreat with sprints down either wing, and, following a corner, Lewandowski struck the frame of the goal. Bayern then probed through the middle, Kimmich’s measured chip inviting Ivan Perisic to reach out and volley. Trapp saved.

The first goal was beautifully set up, Perisic’s dummy setting Thomas Muller, Bayern’s Mr Versatility, clear at outside left. Muller had time to look up and pick his target, which was not the man in immediate view, Lewandowski, but Goretzka, arriving in the penalty area from deep. Muller cut back precisely, and the finish was firm and true.

Eintracht had little in response. Trapp was examined again, by a swerving drive from David Alaba, Bayern’s left-back turned centre-back, before the busy Eintracht goalkeeper conceded his second shortly before half time.

Davies crossed from deep, Muller’s sixth sense did the rest, the scorer controlling Davies’s pass in a whirligig of arms and legs, but, as ever with Muller, finishing far more skilfully than the awkward-looking body-shape suggested. VAR dallied several minutes in ruling him onside.

In full command at the break, Bayern required less than a minute to extend the lead. Another deceptively ungainly Muller volley - it looked like a miscue - released Coman, whose centre was met by Lewandoswki’s stooping header.

Three-nil. Cruise control? It was anything but. Eintracht, utterly limp until seven minutes into the second half, suddenly pulled two goals back. Two corners, two strikes from Hinteregger and a clear signpost that if Bayern are indeed a side of enchanting variation going forward, their versatile defenders can be caught out at set pieces.

Hinteregger was allowed two gos at his first goal, having outjumped his markers; for his second he merely shifted to the near post to glance Sebastian Rode’s corner past Manuel Neuer.

As it turned out, Eintracht had not overcome their own vulnerability to defensive lapses. Gelson Fernandes, having interrupted an Alphonso Davies slalom then gave the ball straight back to Davies, who accepted the gift via an angled shot, with his right foot, across Trapp.

Bayern’s fifth followed more carelessness from Eintracht, Hinteregger deflecting the ball over his own goalline under pressure from Serge Gnabry.

These were the details of the news Bayern Munich dominate Eintracht Frankfurt to solidify top spot in Bundesliga for this day. We hope that we have succeeded by giving you the full details and information. To follow all our news, you can subscribe to the alerts system or to one of our different systems to provide you with all that is new.