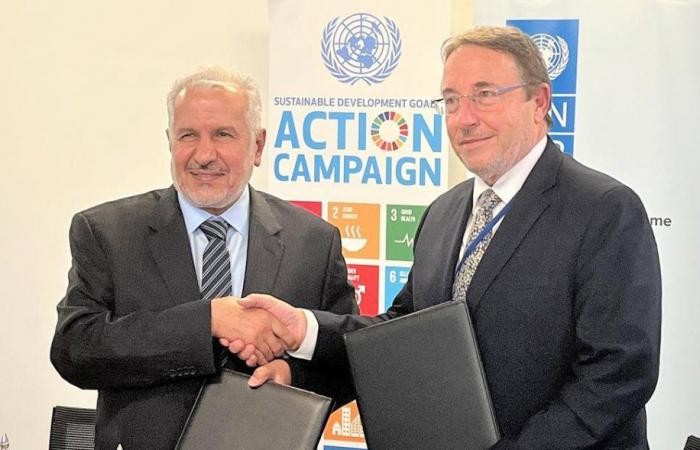 Jeddah - Yasmine El Tohamy - NEW YORK CITY: Saudi Arabia leads the world in optimism, a new report has found, with the Saudis not only confident in where their own lives are headed, but also the Kingdom and even the world.

And the FII Priority event in New York heard from Khalid al-Falih, Saudi minister of investment, who said the optimism was reflected by the conitnued investment in the Kingdom

Released at a forum event in New York on the sidelines of the UN General Assembly on Thursday, the “Future Investment Initiative Priority” report surveyed 130,000 people from 13 countries about the things that mattered most to them.

Richard Attias, CEO of the FII Institute told Arab News he wasn’t surprised that the Middle East and East of the world came over more pessimistic than the West.

“You (the Middle East) have leaders who have a vision. I don't know if it's a longer term vision, but they have a vision. And they expressed that vision in Europe.”

He said West did not have such an obvious vision. “I think the vision is not clearly expressed, and people are a little bit lost. And this is why you saw movements like the yellow jacket in France. A lot of demonstration in Spain, a lot of demonstrations in America.”

“I think these countries, especially the United States, still has to solve many social crisis.”

The FII Priority report asked if people thought their lives were headed in the right direction - most people globally said they were.

But when the question became wider, people in nations such as the UK, USA and France, became more skeptical about the state of their countries and the world generally.

“I'm not surprised to see that the West is pessimistic. The world is pessimistic because we are definitely facing economic crisis,” Attias added.

And Attias said the West was undergoing an “identity crisis,” which did not exist in the East.

The report found that Saudis led the way in feeling positive about their country, only being beaten in their optimism for the state of the world – coming third to China and India.

The upbeat attitude of Saudis didn’t stop there. Asked if they believed their country would be better in the future – a confident 61 percent in the Kingdom said they did – second only to 80 percent in China.

In France 83 percent said no, followed by 78 percent in Italy and 75 percent in Germany.

The biggest concerns of people surveyed around the world were all related to the cost of living crisis, with food security and unemployment playing on most people’s minds.

Terrorism was at the bottom of most people’s list of concerns, looking closer to home.

The survey covered three themes: the social crisis, environmental crisis, and what they referred to as the identity crisis (difficulties linked to the integration of migrants and a loss of traditional values).

Largely the report revealed an even balance for concerns surrounding people’s personal lives and the increasing social inequalities – as did environmental concerns.

Despite the politicization of migration in many countries during election campaigns such as Brexit and the US and French presidential elections, the survey revealed that for most people it was not a significant issue at all.

The US returned a 17 percent concern over migration, while 12 percent of Saudis put it high on their list, Morocco was the lowest with just 5 percent of recipients saying migrants concerned them most.

Attias said he believed this focus politicians placed on immigration showed a discord with the public they were supposed to represent.

“This is why there is a disconnection between what leaders think, or what leaders are putting in priorities and what the people want and consider other priorities,” He explained.

He said the disconnection exposed the need for leaders - political and in business – to reconnect with the people.

There is a social identity crisis, Attias said, not least with a new phenomenon that had been exposed by the report that showed that 50 percent of those surveyed wanted to quit their jobs in the next 12 months.

“We call it the great resignation. I think it will be massive.”

He said the pandemic had caused people to reassess their lives, especially at work where they felt there was no longer scope for progression or to earn more money.

Work, he said, for Westerners at least, had become precisely that – work.

He said 54 percent of people in the west were unable to save for the future, while 66 percent were working to have a decent life.

But in Saudi Arabia 35 percent of those asked looked at work as a way to fulfill themselves.

He said people were increasingly beginning to feel they are not being heard by the politicians and CEOs.

“I think we have to discuss a call to action  - this a wake up call. Many of the people we spoke to were talking of social revolution,” He said.

The findings of the report seem to push the power east, with Middle East citizens expressing more faith in their countries than the west.

The concept that somehow non-western countries were playing second fiddle is certainly not the perception of those living there.

Yasir Al-Rumayyan, Chairman of the FII Institute and Governor of the Public Investment Fund Saudi Arabia said: “Some of the answers to the questions were surprising. But the most of the responses were what we expected.

Rumayyan said since efforts were made by the West to demonize fossil fuels there had actually been an increase in production, but also cost of living had risen – food is more expensive, he said.

Adding: “Everything has gone in the wrong direction.”

Meanwhile he said the IMF had played a major role in stimulating the Saudi economy as the Kingdom continued to invest both internally and internationally.

There is a definite vibrancy in the Gulf – for those living there it is easy not to notice the food poverty or the cost of living crisis.

Sure prices have increased, but with wages for many in the region being significantly higher than in the west, life is just generally that bit easier.

And the continued activity in the economy – largely for the best – results mostly from the Vision projects in the Gulf region that are fueling the growth – and therefore positivity.

S[peaking at the close of the summit, Khalid al-Falih, Saudi minister of investment, said people were continuing to invest in the Kingdom, despite the crisis.

He said the Kingdom was “emerging as a place where climate challenges are being addressed at scale, and at the right pace with very pragmatic policies and systems in place.”

He added that they were transforming the Saudi economy, bringing new sectors on that have “huge potential for growth,” that attracted a lot of international and domestic capital.

And he said the push brought together partnerships “that are really shaping, not just the future of Saudi Arabia, but I believe the region.”

He said while the pandemic had brought about a. more nationalistic view from many countries around the world, Saudi Arabia was in fact doing the reverse and looking towards external investments that would not just benefit the Kingdom, but also the world.

“We are aligning all of these together and the Kingdom has all of the enablers put together.”

And he played to the younger section of the Saudi community who joining the economy.

He said young men and women were “joining our workforce and joining in as entrepreneurs, and indeed our best weapon, best attraction to bring pastors to the Kingdom.”

And he finished saying: “My message to investors everywhere, is you don’t know what you’re missing until you come to Saudi Arabia.”

And he said investors would find it was the “best location to address quality, high growth investment rich market which is very complex.”

He said the Kingdom’s future investments had become far more diverse than oil and gas – with markets for healthcare, biotech, education, logistics.

And in a nod to confidence Saudis have shown in their country’s future, he added: “We’re really digging deep, we’re not only focusing on large anchor investors, which are very important, but we’re digging deep into the ecosystem of the nation, harvesting and harnessing our most important resource which is our young, talented, unlimited, unlimited people.”

These were the details of the news Global Islamic Refugee Fund launched with $100m deposit for this day. We hope that we have succeeded by giving you the full details and information. To follow all our news, you can subscribe to the alerts system or to one of our different systems to provide you with all that is new.