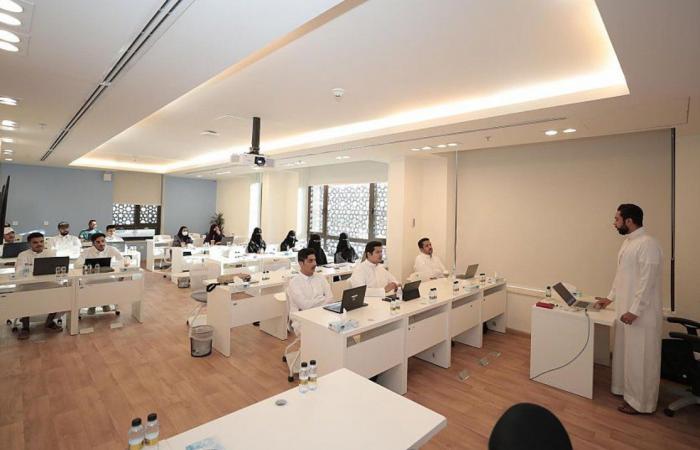 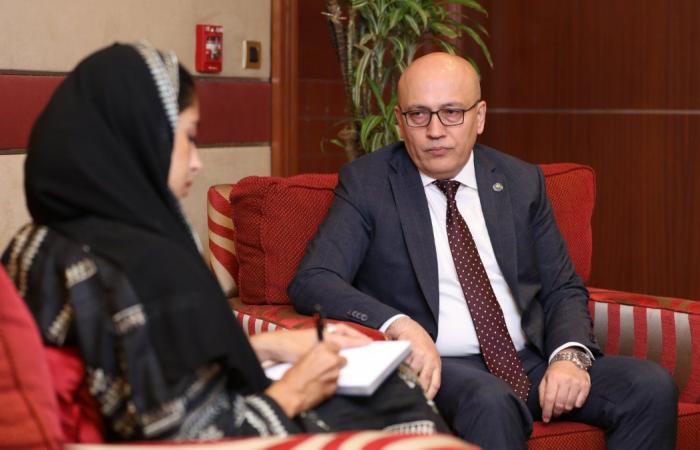 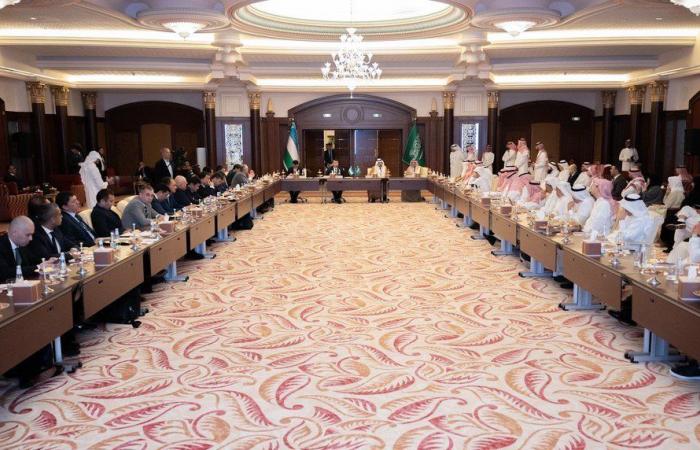 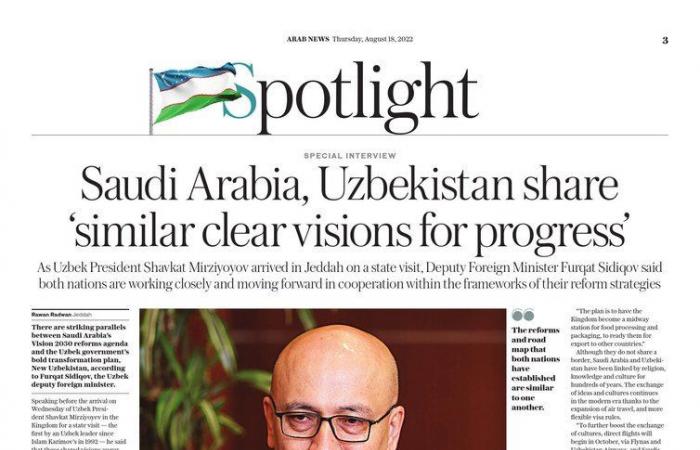 Speaking a day before the arrival on Wednesday of Uzbek President Shavkat Mirziyoyev in the Kingdom for a state visit — the first by a leader of the country since Islam Karimov’s visit in 1992 — he said that these shared visions augur well for the future of bilateral trade and cooperation.

“Saudi Arabia has the capabilities to achieve its Vision 2030 goals,” Sidiqov told Arab News ahead of Wednesday’s meeting of the Saudi-Uzbek Business Council, hosted by the Uzbek consulate in Jeddah.

He added that the reforms and road maps the two nations have developed are similar, representing clear visions for progress, as are the young and dynamic populations of the countries.

“Both nations are working closely and moving forward in joint cooperation within the framework of our strategies,” Sidiqov said. “We are closely following the Kingdom’s ambitious Vision 2030 strategy and we support its bid for Expo 2030.”

Over the past five years, he explained, Uzbekistan has implemented a domestic development strategy aimed at easing its transition to a market economy, which has offered fertile ground for the growth of small- and medium-sized enterprises and a more diversified economy.

He said the strategy echoes that of Saudi Vision 2030, which has opened up the Kingdom’s economy to capitalize on new sectors beyond hydrocarbons and actively encourages entrepreneurism, along with the development of technical skills and creativity among its young population.

For decades, Uzbekistan relied heavily on just a handful of staple exports, including cotton, gold, oil and gas. Eager to diversify its sources of revenue, the country has opened up to foreign investment in agriculture, food security, energy, information technology and other sectors.

On Wednesday, in keeping with their complementary visions, Uzbekistan and the Kingdom signed more than 10 investment agreements worth SR45 billion ($12 billion).

Among them was a 25-year deal, worth $2.4 billion, for Saudi utility developer ACWA Power to build a 1,500-megawatt wind-power project in Uzbekistan, to help the country achieve its goal of sourcing 40 percent of its electricity needs from renewable sources by 2031.

Uzbek officials said that in recent years, Saudi investments in various sectors of the Uzbek economy have increased significantly. There are now 38 joint ventures, 20 of which involve direct Saudi investors. Still, Sidiqov said, there is the potential for even closer business cooperation, particularly in food processing and distribution.

“The numbers don’t reflect the capabilities of the two countries,” he said. “We’re working with the Kingdom to raise the number of joint ventures.

“Agriculture plays an important role in Uzbekistan’s economic development and we’re one of the top nations in food production, food security and we have the capabilities to export food products, organic fruits and vegetables to the Kingdom.

“The plan is to have the Kingdom become a midway station for food processing and packaging, to ready them for export to other countries.”

Although they do not share a border, Saudi Arabia and Uzbekistan have been linked by religion, knowledge and culture for hundreds of years. Among the historical figures who traveled and studied across the Arab and Muslim worlds are four who hailed from places that are part of modern-day Uzbekistan: physician Ibn Sina, mathematician Muhammad ibn Musa Al-Khwarizmi, and Islamic scholars Imam Al-Bukhari and Imam Al-Tirmidhi.

The exchange of ideas and cultures continues in the modern era thanks to the expansion of air travel between Uzbekistan and Arab countries, notably Saudi Arabia, and more flexible visa rules.

“To further boost the exchange of cultures, direct flights will begin in October, via Flynas and Uzbekistan Airways, and Saudis will be exempt from entry visas for a 30-day stay,” said Sidiqov.

Present-day Saudi-Uzbek cooperation extends far beyond trade and cultural exchange into the diplomatic sphere, guided by shared interests in security and humanitarian efforts across the wider region.

In the year since the Taliban returned to power in Afghanistan following the US military withdrawal from the country, regional powers such as Uzbekistan have sought to engage with the new government in Kabul to assist the Afghan people in their time of hardship.

“The humanitarian crisis in Afghanistan is among the highest priorities and our government has set up various initiatives and programs to support Afghanistan,” said Sidiqov.

“In the spirit of neighborly solidarity, we ensured that our relationship is of continued support. By working closely with the government, we want not only to provide humanitarian assistance, but also help them provide job opportunities to their youth and to be a gateway for Central and South Asia.”

He added that in the southern Uzbek city of Termez, for example, the government has established centers to help young Afghans receive an education and develop their skills to prepare them for the job market.

“We’re working to help reconstruction programs and developing its economy to help turn it into a country of opportunities,” said Sidiqov. “Our allies are helping us and supporting us in this endeavor.”

In July this year, a Saudi delegation also attended the international Afghanistan: Security and Economic Development conference, also in Tashkent, during which the Kingdom reaffirmed its commitment to the promotion of regional cooperation.

In June, Saudi Arabia announced a $30 million grant to support the Afghanistan Humanitarian Trust Fund, which operates under the umbrella of the Islamic Development Bank in coordination with the Organization of Islamic Cooperation, of which both the Kingdom and Uzbekistan are members.

“As a neighbor to Afghanistan, our main aim is to provide safe passage of aid to those in need in Afghanistan,” said Sidiqov. 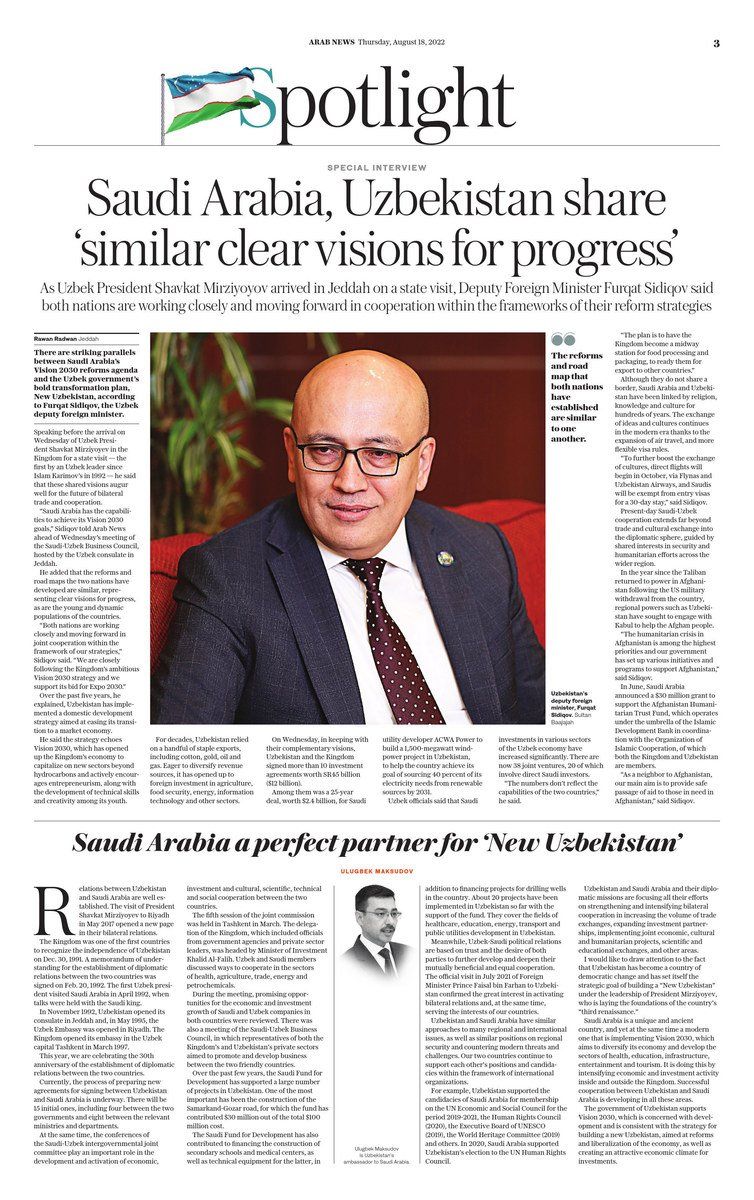 These were the details of the news Tuwaiq Academy trains Saudi youth in advanced technologies for this day. We hope that we have succeeded by giving you the full details and information. To follow all our news, you can subscribe to the alerts system or to one of our different systems to provide you with all that is new.