Coalition spokesman: We have a “bank of goals” to deal with... 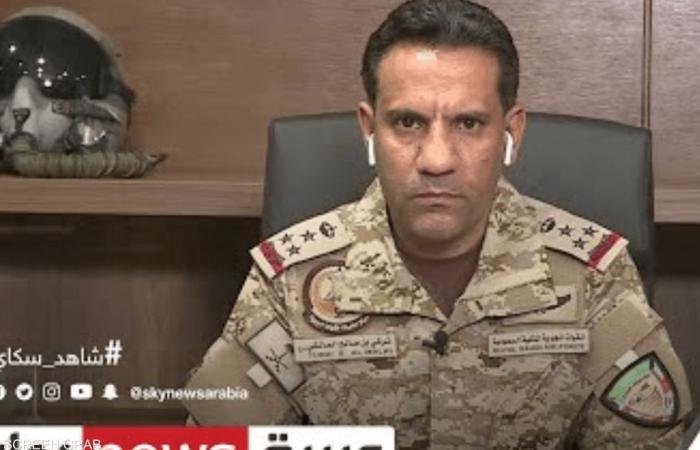 وقال Al-Maliki In an interview with “Sky News Arabia”, Tuesday, he “must deal firmly with these militias and sources of threat to protect civilians, as part of the contributions to maintaining regional and international peace and security.”

Al-Maliki added: “There were military operations on Monday as an extension of previous operations to target Houthi capabilities, and also in response to the threat to use Houthi militias of specific weapons to target civilians in the region, whether in Yemen, Saudi Arabia or the UAE.”

On Monday evening, the coalition announced the launch of a large-scale military operation against Houthi targets, hours after the militias targeted civilian facilities in the UAE and Saudi Arabia.

And he added, “There was continuous monitoring around the clock, and we have a bank of goals to deal with the Houthi militias. We gave them opportunities and there was the option of peace and the option of war, but they chose war.”

A spokesman for the coalition led by Saudi Arabia: “There was a qualitative operation targeting after real-time intelligence monitoring of some Houthi leaders in a meeting northwest of Sanaa.”

Al-Maliki continued: “The qualitative capabilities of the Houthis were also targeted at the Military Academy andJabal al-Nabi Shuaibin which the drones are stored and launched.

He stressed that the coalition’s military operation is continuing, as “the assessment of the operational situation requires that it continue to deal with these militias.”

When asked whether the marches that targeted Abu Dhabi started from an airport Sana’aAl-Maliki said that “the investigations cannot be preempted.”

And he added, “There is an operational review, whether in the UAE or from the coalition, to find out more details about what this terrorist attack is.”

These were the details of the news Coalition spokesman: We have a “bank of goals” to deal with... for this day. We hope that we have succeeded by giving you the full details and information. To follow all our news, you can subscribe to the alerts system or to one of our different systems to provide you with all that is new.