“Days and months I watch nightmares” .. a Saudi teacher tells... 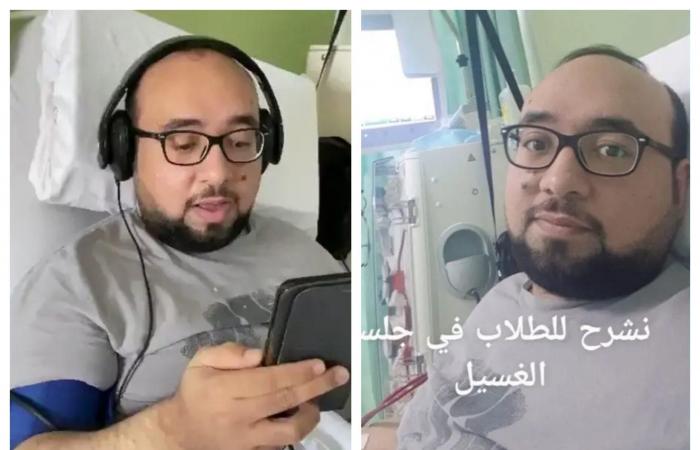 Al-Marsad newspaper: A Saudi teacher lived through suffering imposed on him by the tragedies of Corona, which still kills its victims day after day. With long years, young Khaled Akash lived with illness and pain due to his suffering from kidney failure and having to wash his kidneys over and over again, until Corona came and exhausted him more than before. But after a journey of suffering he was able to recover.

For years, the teacher kept the pain inside him and performed the profession to which he had always devoted his life, and continued for years between his professional duty at school to the hospital for dialysis, and between this and that he hoped to be able to perform a kidney transplant that would rid him of suffering.

The shock was when Akash was infected with the Corona virus, which he could not cope with as he lived for years with kidney disease. His body collapsed, which returned to pain, and his health condition became critical, and he entered a coma that lasted for more than 90 days.

“My body collapsed due to my infection with the Corona virus, and I fell into a coma for more than 90 days, suffering from pain and nightmares I used to watch in my dreams. It was very difficult days and months.”.. This is how young Khaled Akash described his journey of suffering with the damn virus, according to his talk to “Al Arabiya.” .

After 90 days spent in Prince Muhammad bin Abdulaziz Hospital in Riyadh, Akash woke up and did not believe that he had spent all this time away from the world, and with all this his preoccupation was how his family suffered because of him during this period, as he said: “I could not believe that I spent all this time. In a coma, I thought about my family and their suffering for that period, and how they lived through all that pain and sadness.”

Finally, Akash managed to confront Corona, and became in good condition, but he still hopes to be able to perform a kidney transplant, indicating that he applied for a transplant a year and a half ago in Riyadh, but his request was rejected. I trust God, the guardians, and the Ministry of Health to look into my case and quickly respond to my health condition.”

At the end of his speech, Akash expressed his happiness at his return to teaching, saying: “Despite the pain and the long coma, the joy of my students, their great love and their reception of me had a great impact on my psyche.”

These were the details of the news “Days and months I watch nightmares” .. a Saudi teacher tells... for this day. We hope that we have succeeded by giving you the full details and information. To follow all our news, you can subscribe to the alerts system or to one of our different systems to provide you with all that is new.