In the presence of the Emir of “Makkah Al-Mukarramah”… the conclusion... 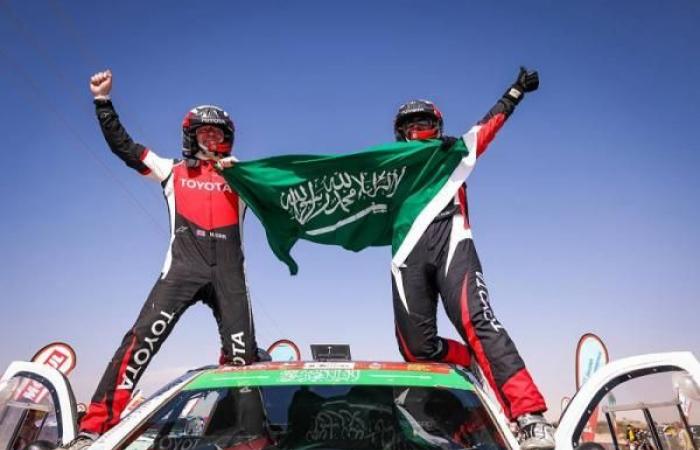 In the presence of His Royal Highness Prince Khalid Al-Faisal, Advisor to the Custodian of the Two Holy Mosques, Governor of Makkah Al-Mukarramah Region, the curtain came down today, Friday, January 14, 2022 AD, at the Jeddah Corniche Circuit on the “Dakar Saudi Arabia 2022” rally, which was held in the Kingdom for the third year in a row during the period from January 2-14 2022 AD, during which the contestants crossed 12 stages in various governorates, cities and regions of the Kingdom.

The closing ceremony, which was attended by His Royal Highness Prince Khaled bin Sultan Al-Abdullah Al-Faisal, Chairman of the Board of Directors of the Saudi Automobile and Motorcycle Federation and the Saudi Motor Sports Company, and His Excellency Mr. Badr bin Abdulrahman Al-Qadi, Deputy Minister of Sports, witnessed the crowning of the winners of the race in the six categories (cars, motorcycles, bicycles). Four-wheel drive motorcycles, trucks, and light desert vehicles, in addition to the Dakar Classic class), after the end of the 12th stage of the race, which started from Bisha Governorate to Jeddah, with a total distance of 680 km, including 164 km for the special stage subject to timing.

At the end of the third edition of the Saudi Dakar Rally, Qatari racer Nasser Al-Attiyah, driver of the Toyota team, won first place in the car category, surpassing the French “Sebastien Loeb” driver of the “PRX” team, who finished second, while the Saudi Yazeed Al-Rajhi, the “Over” driver, won the first place. Drive” achieved a historic achievement by achieving third place, as the first Saudi to climb the podium in the Dakar Rally since its inception 44 years ago.

After the end of the last stage, Qatari Nasser Al-Attiyah thanked the organizers of the Saudi Dakar Rally 2022, saying: “I am proud of winning the title of the rally in Saudi Arabia, and my victory today is a victory for the Arab region in general and the Gulf region in particular, and we are happy to win in light of the fierce competition.” The distinguishing mark in this version is our consistent performance throughout the rally stages.”

He added, “Winning the Dakar Rally in the Kingdom is not easy, as the Gazoo team played a big role by preparing the car in less than one year, and the most important thing is that we maintained our pace and won this precious title, praise be to God.”

For his part, the rider Yazid Al-Rajhi said in a press statement immediately after the end of the rally: “I congratulate the Custodian of the Two Holy Mosques and His Highness the Crown Prince – may God preserve them – for this important achievement recorded in the name of the country. I would also like to extend my thanks and appreciation to His Highness the Minister of Sports and His Highness the President of the Federation.” Saudi Automobiles and Motorcycles for their support and guidance, which had a great impact on achieving this national achievement, praise be to God.

Al-Rajhi added: “We have covered more than 8250 km, and we have adopted a specific strategy in the stages of the race, through which we ensure consistency at the level and finish each stage in a specific position. I am very happy to finish the race in third place, which is a new achievement for Saudi motor sport, and I aspire to achieve the best.” Next year – God willing -“.

The Frenchman, Alexandre Giroud, rider of the Yamaha team, won the title of the current version of the rally in the quads category, 25 years after his father achieved the title in 1997 AD. Vishnevsky, the Orlin rider, finished third.

In the trucks category, the “KAMAZ” team monopolized the first three places in the Dakar Rally Saudi Arabia 2022, where the Russian Dmitry Stonikov won the first place, and his colleague Eduard Nikolayev came second, followed by Anton Shebalov in third place.

In the light desert T4 category, American Aston Jones won the title, after a strong competition with Spaniard Gerard Varese, who finished second, while Lithuanian driver Rokas Paciuska came third for the standings.

These were the details of the news In the presence of the Emir of “Makkah Al-Mukarramah”… the conclusion... for this day. We hope that we have succeeded by giving you the full details and information. To follow all our news, you can subscribe to the alerts system or to one of our different systems to provide you with all that is new.