The Minister of Sports launches a strategy to support Saudi sports... 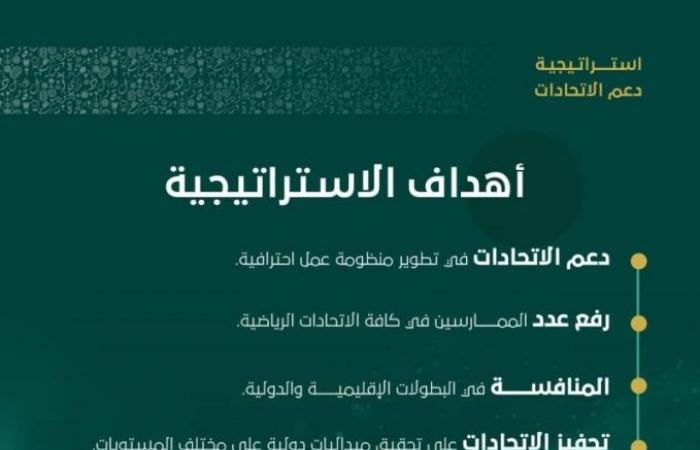 His Royal Highness Prince Abdulaziz bin Turki Al-Faisal, Minister of Sports and President of the Saudi Arabian Olympic Committee, today launched a strategy to support Saudi sports federations with a budget of two billion and 600 million Saudi riyals within the quality of life program.On this occasion, His Highness Prince Abdulaziz bin Turki Al-Faisal expressed his thanks and gratitude to the Custodian of the Two Holy Mosques King Salman bin Abdulaziz Al Saud and to His Royal Highness Prince Muhammad bin Salman bin Abdulaziz, Crown Prince, Deputy Prime Minister and Minister of Defense – may God preserve them – for the great interest and support they attach to the sector Sports in the Kingdom have greatly contributed to placing the Kingdom in the ranks of advanced sports countries at the global level.

His Highness said in a press statement: “In light of this unprecedented support from our wise leadership, and the follow-up and interest of His Highness, Crown Prince Mohammed bin Salman, Saudi sport has taken advanced steps globally, the last of which was winning the hosting of the 2034 Asian Games for the first time in the Kingdom’s history, in addition to a rise in The number of Saudi sports federations from 32 in 2015 to 91 federations, committees and sports associations in the current year, and today we are entering a new phase by developing a comprehensive strategy concerned with developing sports federations in various games, and creating a sports generation capable of competing in various competitions, games and sports, to raise the name of the Kingdom high – God willing – in major regional and international forums.

For his part, His Highness Prince Fahd bin Jalawi bin Abdulaziz bin Musaed, Vice President of the Saudi Arabian Olympic Committee, expressed his pride in launching this strategy. And the great interest that the sports sector receives from our wise leadership – may God protect it -, and its results on the level of sporting achievements, praising in this regard the Minister of Sports and Chairman of the Saudi Arabian Olympic Committee Prince Abdulaziz bin Turki Al-Faisal for his daily and accurate follow-up and his constant keenness on various sports and games .

His Highness added: “The main objective of the strategy is to provide a supportive environment for federations to reach the desired goal in terms of administrative and technical development, and to support federations to achieve their national and international goals, especially that the Kingdom, God willing, is about to participate in many tournaments in the coming period.”

The federations obtain this support according to a number of criteria, namely: developing the game, increasing the number of practitioners, competing in regional and international tournaments, promoting sports tourism, increasing the popularity of the game in the Kingdom, as well as contributing to promoting the culture and heritage of the Kingdom and the national economy, in addition to creating a range of opportunities Diversified investment.

The funding provided to the unions is divided into two parts. The first is basic funding, which is the support provided to cover the basic activities of the unions, including operating costs, camps and salaries, and the second section is catalytic funding, which is packages of additional funding to reward the unions for their development and achievements, based on three requirements to achieve: The first is operational capabilities, which means The Federation’s strategy and objectives, organization and governance, the second is technical capabilities in terms of the strength and number of tournaments and the extent of the development of human competencies technically and administratively.

The strategy also provides a number of incentives for federations once their players achieve medals, as follows:

His Highness the President of the Saudi Arabian Olympic Committee also announced the launch of the Elite Athletes Development Program in its new form, which aims to enhance the efficiency and preparation of athletes in the long term, implement a healthy lifestyle and an exemplary style, in addition to achieving excellence in many sports at the international level, and creating an environment Suitable for high performance according to the most prominent international sports standards and theories.

The idea of ​​the program revolves around the establishment of a sports center under the supervision of the Saudi Arabian Olympic Committee, in cooperation with a number of sports federations, and the employment of coaches and experts to enhance performance and renovate facilities, and to achieve a realistic and immediate impact on the level of Saudi sports.

The program includes three main phases: establishing the Saudi Olympic Training Center as an independent body managed under the supervision of the Saudi Olympic Committee, improving results and performance, achieving advanced stages in the Olympic and Asian Games, preparing a sustainable network of elite athletes, and benefiting from investment and competition opportunities in The final stages of the Asian and Olympic Games.

It is noteworthy that the elite players will be selected after reviewing their levels since 2018 until today, to include elite players and promising elite players, as 180 elite athletes are targeted in the first year of the initiative, to reach 480 male and female players by 2023.

These were the details of the news The Minister of Sports launches a strategy to support Saudi sports... for this day. We hope that we have succeeded by giving you the full details and information. To follow all our news, you can subscribe to the alerts system or to one of our different systems to provide you with all that is new.