Saudi banks restore pre-pandemic valuations.. they have absorbed the shocks with... 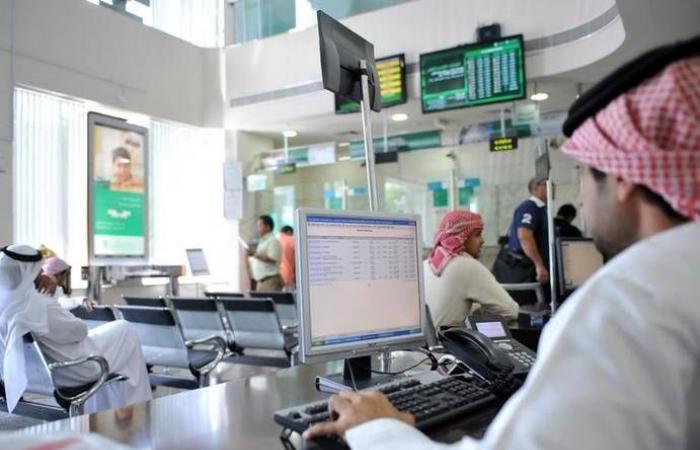 A recent economic report confirmed that the effects of the Corona pandemic on Saudi banks were limited, pointing out that banks’ ratings are currently close or even higher than pre-pandemic levels.
The report, prepared by the Union of Arab Banks on the Saudi banking sector during the first half of 2021, and reviewed by Al-Eqtisadiah, indicated that the banks, in addition to their expansion in housing loans, are currently focusing largely on financing micro, small and medium projects through the “Kafala” program.
And he indicated that the statistics indicate that financing for the micro, small and medium enterprises sector has doubled since 2018 until now, as banks seek to increase financing of this sector through advanced digital credit systems.
He pointed out that 80 percent of the new bank accounts that were opened in Saudi banks were completed through “digitization” programs, and that more than 30 percent of transactions became fully digital, as part of the banks’ strategy to expand digital transformation programs for all their banking services. .
He continued, “What clearly indicates the Kingdom’s pursuit of further digitization is the granting of licenses to two fully digital banks during last June, the first of which is the Saudi Digital Bank with a capital of 1.5 billion riyals, and the second stc Bank with a capital of 2.5 billion riyals.”
The report indicated that these new licenses embody the Kingdom’s desire to become a digital financial center and increase the efficiency of its banking system.
He pointed out that expectations indicate that the penetration of the Internet in the Kingdom will reach 97 percent in 2025, and digital banks will have a large customer base, and this will also stimulate traditional banks to innovate in the field of financial technology.
The report noted that the Saudi banking sector remained resilient in the face of unprecedented uncertainty, which resulted from the Corona pandemic during 2020 and the significant drop in oil prices during the first half.
He added that the sector has proven solid operational and financial flexibility and high efficiency in managing credit and liquidity risks, specifically in light of the Corona crisis, pointing out that in light of the great spread of the pandemic and the accompanying contraction in economic activity, the credit granted by Saudi banks grew at a strong pace, and on the face of it. In particular, credit directed to housing loans and, to a lesser extent, the small and medium enterprises sector.
The report continued, that despite the atmosphere of economic and financial uncertainty, which resulted from the pandemic, the sector continued to provide financial support through new lending to companies and families, and loans granted to micro, small and medium enterprises increased, which were reinforced by government support packages directed to support the private sector, stressing Although non-performing loans increased overall, they remained low.
And he indicated that given the strong financial solvency of the Saudi banking sector, which is demonstrated by the high capital adequacy ratios of banks, the sector is in a very solid position and is able to withstand any possible decline in asset quality, and the liquidity position in the sector has remained abundant in light of the pandemic, supported by the growth of Private sector deposits and liquidity support from the Saudi Central Bank.
He stressed that strong liquidity and capital reserves helped Saudi banks absorb the economic and financial shock of the pandemic.
Despite the decline in the profitability of banks during 2020 as a result of a decrease in interest income and an increase in provisions for credit risks, the report indicated that the performance of Saudi banks exceeded the performance of banks in other Arab countries during 2020.
He expected that the performance of the Saudi banking sector would be strong during the current year, based on the expected recovery in economic activity, the increase in vaccination against Corona, in addition to the ongoing structural reforms in the Kingdom.
The report indicated that the ten Saudi banks recorded combined profits during the first half of 2021, which exceeded $6.5 billion, compared to $8 billion during the whole of 2020 and $11 billion during 2019.
It is likely that Saudi banks will continue to record good performance during the second half of 2021, so that the combined profits for the current year exceed those recorded in 2019.
According to the report, syndicated loans to Saudi banks recorded a growth of 18.8 percent during the first half of 2021, compared to 12.9 percent during 2020 and 10.6 percent during 2019.
The consolidated deposits of Saudi banks recorded a growth of 15.1 percent during the first half of 2021, compared to 8.5 percent during 2020 and 11.1 percent during 2019.

These were the details of the news Saudi banks restore pre-pandemic valuations.. they have absorbed the shocks with... for this day. We hope that we have succeeded by giving you the full details and information. To follow all our news, you can subscribe to the alerts system or to one of our different systems to provide you with all that is new.