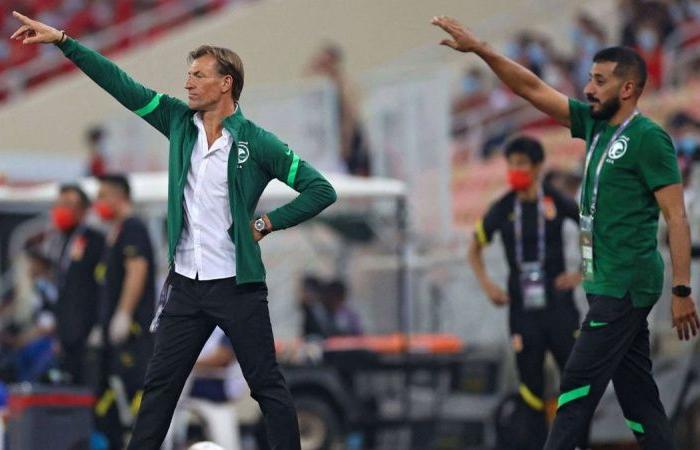 Riyadh – French coach Hervé Renard equaled the record registered in the name of the former coaches of the Greens, the Brazilians Mario Zagallo (1982) and his compatriot Anguso (2007), by not losing in 9 consecutive matches in the World Cup qualifiers.

Renard reached this number after leading the Saudi national team to a 3-2 victory over China in the fourth round of the 2022 World Cup qualifiers.

Renard aspires to set the record for not losing in 10 consecutive qualifying matches. Renard was the first coach to achieve 4 consecutive victories, marking the best start for a coach in the history of the Saudi national team in the World Cup qualifiers.

Renard will be on a date with history to transfer the green to the list of the 50 best teams in the FIFA ranking that he missed in the past years, after the victory over China.

The French led the Saudi national team in 22 matches, winning 15, drawing (4) and losing only (3). Under the leadership of the French coach, Al-Akhdar scored 43 goals, conceded 15 goals and kept a clean sheet in 9 matches.

Since the start of the 2022 World Cup qualifiers, Renard has not lost any match with the Saudi national team, winning 9 matches and drawing two matches.

If the Saudi team, led by Renard, qualifies for the 2022 World Cup, the French coach will join the list of coaches who have succeeded in reaching the World Cup twice in a row, with teams from two different continents, after he led Morocco to the World Cup in Russia 2018.

The Saudi team achieved many historical records, after defeating its Chinese guest (3-2), on Tuesday evening at the Radioactive Jewel Stadium, as part of the fourth stage of the Asian qualifiers for the 2022 World Cup.

The Saudi team raised its score to 12 points, to lead the second group, achieving victory in all its matches, while China is in fifth place with 3 points.

And Al-Akhdar became the only Asian team to reach the full mark, after 4 rounds of the current qualifiers.

The team achieved the longest winning streak in the qualifiers with 9 matches, and also won the first 4 rounds of the final round of the qualifiers, in an unprecedented event for the green.

At the level of bilateral confrontations, Al-Akhdar scored the eighth victory against China from a total of 19 matches in various tournaments, while the Dragon achieved 7 victories, and attended a draw 4 times.

The Saudi team needs to achieve 10 points out of 18 possible, to qualify for the World Cup, provided that it does not lose from its Japanese counterpart, if the latter wins all its confrontations.

Al-Akhdar seeks to beat Australia in the next round, to repeat the achievement of the 2006 qualifiers, by defeating all the teams in the group.

Al-Akhdar continued its series of positive results in the month of October, increasing its number of victories to 52, compared to 26 draws and 25 losses.

At the level of World Cup qualifiers, he played 25 matches in October, winning 13 of them, compared to 8 draws and 4 losses. Al-Akhdar predicted its numbers on October 12, with two wins over China and Indonesia, compared to a single loss against China at the qualifying level.

These were the details of the news Renard continues the numbers game with Saudi Arabia | for this day. We hope that we have succeeded by giving you the full details and information. To follow all our news, you can subscribe to the alerts system or to one of our different systems to provide you with all that is new.