Adoption of the job discipline system and procedures to protect Saudi... 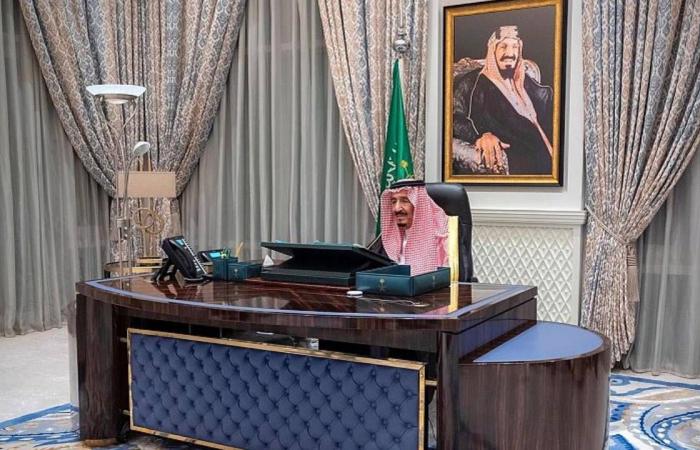 The Council of Ministers held its session today – via video communication – under the chairmanship of the Custodian of the Two Holy Mosques, King Salman bin Abdulaziz Al Saud, Prime Minister.

At the beginning of the session, the Council of Ministers welcomed the Kingdom’s hosting of the “Green Saudi Initiative Forum” and the “Green Middle East Initiative Summit” next October, based on its pioneering role in facing climate crises, supporting the efforts of the international community to address the main challenges of the environment, and its determination to create A lasting global impact, in facing the phenomenon of climate change, protecting the earth and nature, and contributing to achieving global goals; To push the wheel of combating climate-related crises in a coordinated manner, regionally and internationally.

In this context, the Council considered the Public Investment Fund’s announcement of the intention to establish the Riyadh voluntary platform for trading and exchanging carbon insurance and compensation in the Middle East and North Africa region, as reflecting part of the Kingdom’s efforts in the region to meet the challenges of climate change and motivate institutions to reduce their carbon emissions, and as an extension of its endeavors to To contribute to improving the environment and reducing the negative effects of urban development.

In his statement to the Saudi Press Agency, the designated Minister of Information, Dr. Majid bin Abdullah Al-Qasabi, said that the Council of Ministers then reviewed the overall talks and meetings between the Kingdom and a number of countries during the past days, to move forward in developing and strengthening relations and intensifying cooperation in various fields, in a way that contributes to Achieving more coordination towards international issues.

The Council praised the steps taken to strengthen the bonds of cooperation between the Kingdom and the brotherly Republic of Iraq, within the framework of the Coordination Council’s work to consolidate relations at the strategic level and open new horizons in various fields, and achieve everything that would contribute to maintaining international security and peace, in light of what surrounds The region faces regional and global challenges and changes.

The Council of Ministers touched on the Kingdom’s keenness to enhance its role in regional and international organizations to support the global economy and its growth and achieve sustainable development, while addressing the results of the twentieth ministerial meeting of OPEC and non-OPEC producing countries, and what was highlighted by the annual meetings of the Islamic Development Bank Group that were held Its actions in the Uzbek capital, Tashkent, are among the Kingdom’s significant contribution to efforts to address the Corona pandemic and its effects on Islamic countries and peoples.

The Council stressed that the classification of the Kingdom of Saudi Arabia, second in the world among the G20 countries in the report issued by the European Center for Digital Competitiveness for the year 2021 AD, is a result of the support and empowerment of the state for the communications and information technology sector over the past years, and reflects the qualitative leaps it has achieved at the level of infrastructure. Telecommunications, regulations and legislation, digital capabilities development, and mega projects in this field.

The Council of Ministers dealt with a number of events and developments in the situation and their course, stressing that the Kingdom will take the necessary measures to protect its lands and capabilities and the safety of its citizens and residents, and to stop the hostilities practiced by the Iranian-backed Houthi militias and their violations of international laws and customary rules, appreciating in this regard the efficiency of the Air Defense Forces. The Saudi royal family, and the coalition forces to support legitimacy in Yemen, to confront and thwart those terrorist acts that target civilians and civilian objects in a deliberate and systematic manner.

The Council of Ministers concluded the following:

Approving the accession of the Kingdom of Saudi Arabia to a cooperative agreement for the Arab countries located in Asia for research, development and training in the field of nuclear science and technology (ARASIA), and authorizing His Highness the Minister of Foreign Affairs – or his representative – to complete the necessary, to inform the International Atomic Energy Agency after completing the necessary regulatory procedures To approve the Kingdom’s acceptance of joining the aforementioned cooperative agreement.

Authorizing the Governor of the Saudi Central Bank – or his representative – to discuss with the British side a draft memorandum of understanding between the Saudi Central Bank in the Kingdom of Saudi Arabia and the Bank of England (the Prudential Policy Authority) in the United Kingdom of Great Britain and Northern Ireland to cooperate in the field of supervision of financial institutions, and to sign It, and then upload the final signed copy, to complete the statutory procedures.

Authorizing the Chairman of the Board of Directors of the Saudi Space Authority – or his representative – to discuss with the French side a draft cooperation agreement between the Saudi Space Authority in the Kingdom of Saudi Arabia and the National Center for Space Studies in the Republic of France to cooperate in the field of the peaceful use of outer space, to sign it, and then raise The final signed copy, to complete the legal procedures.

Adoption of the final account of the state for a previous fiscal year.

Approval of the job discipline system.

Appointment of Dr. Abdullah bin Mastour Al Marzouq as a representative member of the Technical and Vocational Training Corporation in the Board of Directors of the Social Development Bank.

Approval of promotions to the fourteenth rank, as follows:

– Ibrahim bin Abdulaziz bin Abdulrahman bin Zaid is promoted to the post of Director General of Financial Affairs, rank (14) at the Ministry of Interior.

– Mansour bin Abdullah bin Bin Al-Roqi is promoted to the post of Director General of Expatriate Affairs Department, rank (14) at the Ministry of Interior.

– Fahid bin Mishnan bin Mubarak Al-Dosari is promoted to the position of (security advisor) at rank (14th) in the Public Security.

– Zaid bin Ibrahim bin Muhammad Al-Shibl is promoted to the position of (financial advisor) at rank (14th) at the General Court of Accounts.

– Eng. Faris bin Abdulaziz bin Abdullah bin Faris is promoted to the position of (Director General of the President’s Office), rank (14) at the Board of Grievances.

– Muhammad bin Ahmed bin Muhammad Al-Nakhbi is promoted to the position of (administrative advisor) at rank (14) at the Board of Grievances.

The Cabinet also reviewed a number of general topics on its agenda, including annual reports of the (cancelled) General Authority of Meteorology and Environmental Protection, the General Authority of Civil Aviation, and the General Presidency of the Commission for the Promotion of Virtue and the Prevention of Vice, and the Council took the necessary measures regarding these topics.

These were the details of the news Adoption of the job discipline system and procedures to protect Saudi... for this day. We hope that we have succeeded by giving you the full details and information. To follow all our news, you can subscribe to the alerts system or to one of our different systems to provide you with all that is new.