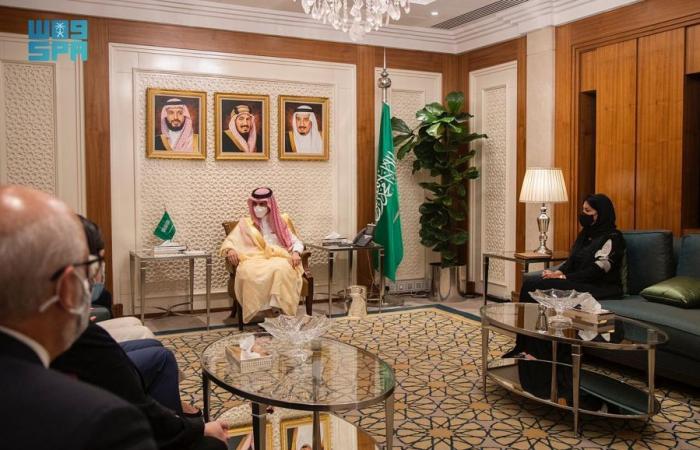 Thank you for reading the news about US, Saudi officials hold talks on regional security and now with the details

Jeddah - Yasmine El Tohamy - RIYADH: Saudi Arabia is on course to meet the aims laid out in Vision 2030 following five years of success so far, senior representatives were told.

The chairs of the Kingdom’s Vision 2030 Realization Program Committee – including the Ministers of Health, Tourism, Finance, Economy and Planning — met in Riyadh on Saturday.

Health minister Tawfiq Al-Rabiah said there had been a marked improvement in the health sector since the start of Vision 2030, which later saw the introduction of the Mawid and Sehhaty apps.

“Then the citizen can go to the appointment within three or four days. We launched this service two and a half years ago; more than 76 million appointments have been booked so far, with nearly 150,000 daily appointments.”

Other services include the call center, 937, which now receives more than 140,000 calls a day, as well as remote medical consultations where patients can receive prescriptions remotely.

Ahmed bin Aqeel Al-Khatib, chairman of the Quality of Life Program, has a budget of $16 billion to make the Kingdom’s cities among the best to live in globally.

The program is working alongside 13 government entities to measure quality of life based on local services.

There have been 11 cultural committees established under the Ministry of Culture, as well as a growth fund.

There have been 100,000 jobs created through the implementation of more than 10,000 activities in the entertainment sector.

And more than 1000 small and medium companies were created in the sector.

Al-Khatib said the Tourist Visa Program, which launched before the COVID-19 pandemic, had issued 450,000 visas.

He added the Green Riyadh Project aimed to improve quality of life and cultural diversity.

The Kingdom also joined global financial indicators, which contributed to $40 billion in foreign investment, while the banking sector witnessed huge leaps, including the introduction of financial technology, he added.

He said the Public Investment Fund (PIF) will be an essential reserve to reduce the need for additional resources after 2030.

Al-Jadaan said public debt levels were not a concern as they sit in the range of 30 to 33 percent of Gross Domestic Product (GDP) — a reasonable level, he said, compared to other G20 countries and the region.

He emphasized that the main focus of Vision 2030 is on citizens, through direct or indirect initiatives.

“Today 82 percent of the judicial services are automated,” Al-Tuwaijri said.

He said the Kingdom’s internet speed had increased significantly — adding that 5G was one of the biggest achievements, as coverage reached 60 percent in major cities and 45 percent in all other cities.

Women’s empowerment has improved with participation in society through work and policy making has reached 33 percent, Al-Tuwaijri said, beating the program’s previous goal of 27.5 percent in 2020.

Traffic incidents decreased by 51 percent, as part of the national transformation in the traffic system.

These were the details of the news US, Saudi officials hold talks on regional security for this day. We hope that we have succeeded by giving you the full details and information. To follow all our news, you can subscribe to the alerts system or to one of our different systems to provide you with all that is new.