Tabuk’s Ramadan table has a flavor all its own 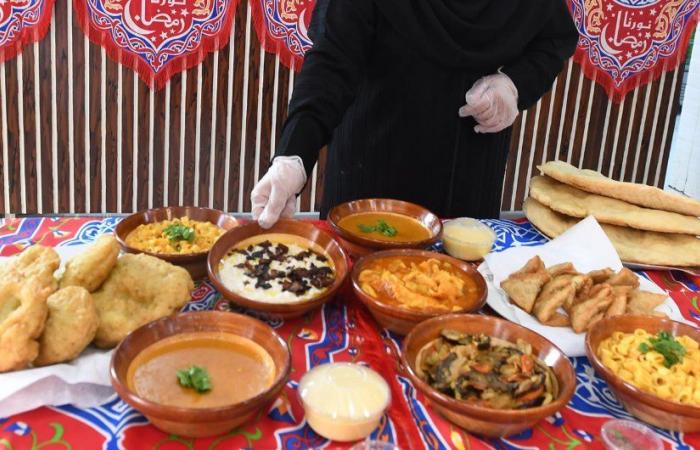 Jeddah - Yasmine El Tohamy - JEDDAH: Saudi citizens say they have become more confident that the country’s Vision 2030 plan is on the right track, after watching Crown Prince Mohammed bin Salman on TV marking the vision’s fifth anniversary.
The crown prince reaffirmed the Kingdom’s commitment to removing extremism. In his Tuesday interview, he made it clear that the Qur’an and Sunnah are the main sources of the legislative system in the country, adding that for a country to attract capital and grow on all levels, extremist projects must be eradicated.
Faisal Al-Bugami, a National Guard employee, said: “The Saudi leadership has always been reiterating this fact, and all Saudi citizens know well that this country was first built on Islam, and it will always be an Islamic country.”
The crown prince’s comments on the Value Added Tax were received positively and reflected the government’s interest in protecting the citizens in the long run.
In a tweet, Mahfouz Al-Ghamdi, a columnist at Makkah online newspaper, said that the interview emphasized his keenness to secure a good future for the coming generations in Saudi Arabia.
“The speech also showed that he is keen to not pour any more money without a clear plan. Moreover, it stressed the continuation of good life to the people of Saudi Arabia,” he said.

Millions of viewers were glued to the screens to see where their country’s vision 2030 was going and what has been done, especially with regard to housing, which the crown prince described as “one of the biggest challenges we have faced has been the need to increase housing ratios which we’ve seen huge demand on from citizens.”
Speaking to Al-Arabiya TV channel, Fadhl Al-Buainain, member of the Shoura Council, recalled the speech made by King Salman when he came to the throne.
“King Salman pointed out that one of the most important issues he would consider was housing. When Vision 2030 started, one of its essential goals was to help every citizen have their own house, and increase the house ownership ratio. Today, Crown Prince Mohammed bin Salman repeats and stresses this goal,” Al-Buainain said.
He added: “I think having a house is key to family security, and overall security and stability. With the support of the leadership, the Ministry of Housing has succeeded in achieving this goal.”
Meanwhile, Khaled Al-Salem, a teacher for over 22 years and a beneficiary of the services of the Ministry of Municipal and Rural Affairs and Housing in Taif, told Arab News that he had lost hope after being on the waiting list of the Real Estate Development Fund for over 15 years.

Millions of viewers were glued to the screens to see where their country’s vision 2030 was going and what has been done, especially with regard to housing, which the crown prince described as ‘one of the biggest challenges we have faced has been the need to increase housing ratios which we’ve seen huge demand on from citizens.’

“I failed to receive a loan to help me build a house for my family. However, with the support of the Ministry of Housing, I am soon moving to my own house,” he said, adding: “The support I received from the government helped me buy a piece of land and build my dream house on it.”
Al-Salem has now secured a home for his children. He said it was one of the benefits of Vision 2030, highlighting the fast, flexible and easy procedures he went through.
Dr. Alyaa Omar Al-Marwaey, a lecturer of curricula and methods of teaching English at Umm Al-Qura University, said the crown prince’s interview has left a positive impact, not only in the hearts of all Saudis but also in the minds of all expats residing in this country.
“It has shown us that there were systematic plans to integrate the efforts of the different ministries in a way that could effectively assist in securing comfort and prosperity to both citizens and residents,” she told Arab News.
She added that the reform plans are pouring investment opportunities on various educational, social, military and environmental levels, as well as many other vital opportunities.
“It is a great chance for Saudi citizens to see Crown Prince Mohammed bin Salman present what has so far been achieved in the Vision 2030,” Al-Marwaey said, adding: “We are proud to be part of this development dream that is coming true.”
She said that the leadership has continued what the Saudi founder King Abdul Aziz started in creating ministries to better serve citizens and expats.
“These ministries have recently been reshaped to better achieve the same goals set by the late founder. The combined efforts of the ministries are now showing greater performances on all levels. Various sectors such as education, health, security, culture, tourism and the environment are witnessing huge leaps in their performance,” Al-Marwaey said.
For the tourism sector, she said that it is doing a “great job” and is expected to draw the attention of millions of people to the green Saudi Arabia.
“This sector is moving with the pride of the deep-rooted Arab and Islamic identity of Saudi Arabia. The Saudi Vision will certainly develop the unique Arab and Islamic heritage, which is a key component of the Saudi culture. This heritage will attract tourists from different parts of the world,” Al-Marwaey concluded.

These were the details of the news Tabuk’s Ramadan table has a flavor all its own for this day. We hope that we have succeeded by giving you the full details and information. To follow all our news, you can subscribe to the alerts system or to one of our different systems to provide you with all that is new.