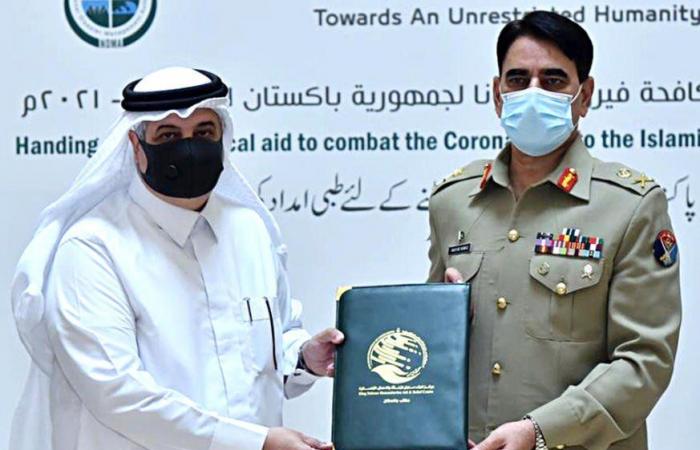 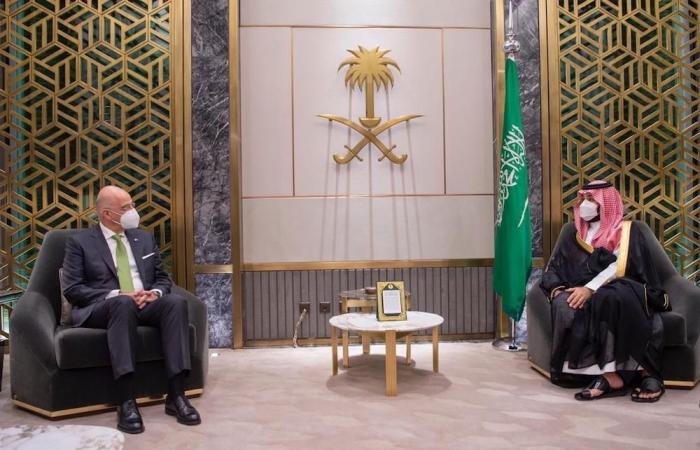 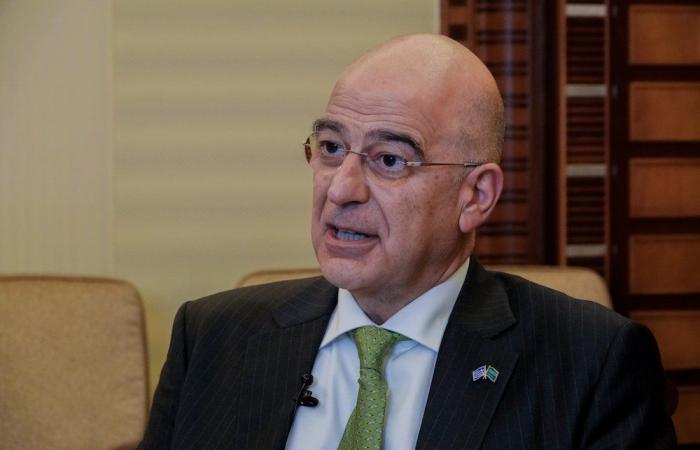 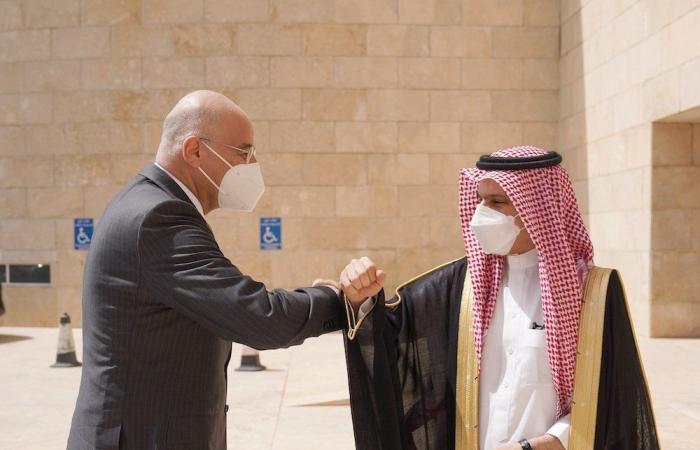 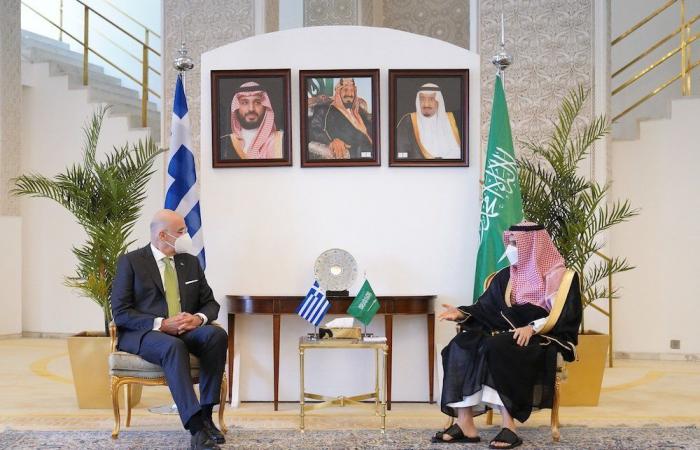 Thank you for reading the news about Saudi aid agency delivers $1.5 million medical aid package to Pakistan and now with the details

JEDDAH: The Patriot air defense system that will be provided by Greece to Saudi Arabia will not only bolster the Kingdom’s security but also secure global energy supplies, Nikos Dendias, the Greek foreign minister, has told Arab News.

He made the remark during an exclusive interview on Tuesday, after signing an agreement on draft arrangements for the legal status of the Greek armed forces in Saudi Arabia that will be supporting the Kingdom’s defense capabilities.

“The reason I'm here today is to sign an agreement with the Kingdom of Saudi Arabia according to which a (battery) of Greek Patriot missiles will be stationed in Saudi Arabia in order to help the defenses of the Kingdom, but also secure the energy supply of the world,” Dendias told Arab News.

He said “the sky is the limit” as far as cooperation between Greece and Saudi Arabia is concerned, adding that “it is a new era and we are progressing rapidly.

Discussions between the two sides extended to other areas besides defense. Saudi Arabia has been opening its doors to international companies and foreign investors to contribute to the Kingdom’s transformation and development plans.

Asked whether Greek companies were looking forward to participating in the upcoming projects, Dendias said he saw the opportunity as something much bigger than a matter of business.

“This is a project that I have to say has a historical component. It's a huge change and I would like my country to be a part of it.”

On April 16, Dendias was in the news when he and his Turkish counterpart clashed openly at a joint news conference in Ankara. Seeking to ease months of tensions over territorial disputes in the Eastern Mediterranean, he met Turkish President Tayyip Erdogan and Foreign Minister Mevlut Cavusoglu. But the news conference, which began with hopes of improved relations, quickly descended into acrimonious accusations from both sides.

“But what I wish that will happen in the future is that Turkey will understand that this, this is the right way forward and Turkey will eventually join this understanding between countries. But of course, being an optimist does not mean turning blind. There's a long way to go before we can see that.”

Elaborating on the disputes embroiling Turkey, Greece and Cyprus over oil and gas drilling in the Eastern Mediterranean he said: “Greece believes in renewables. Greece is not going to start digging the bottom of the sea of the Mediterranean in order to find gas, in order to find oil, for (this) very, very simple reason.

“But we need 10 or 20 years to find it and exploit it, and cost-wise it would be so much more expensive than, for example, in Saudi Arabia. So, economically I don't envision Greece becoming an oil-producing country.

“And with all due respect, the Aegean (Sea), for example, is a paradise on earth. We are not planning to turn (it) into a Gulf of Mexico. So, Greece wishes to have energy supplies. Greece wishes to have very good relations with the Saudi Kingdom, but Greece does not plan in the foreseeable future to become an oil- and gas-producing country.”

According to UNWTO, Greece broke an all-time record by welcoming 33 million international visitors in 2019, making it a leader in global tourism and has been high on the top of many tourists’ list.

Earlier this year, Saudi Arabia’s Minister of Tourism Ahmed Al-Khateeb announced that the Kingdom was aiming to attract new investments worth $58 billion by 2023 in tourism infrastructure. The sector currently contributes 3.5 percent of the total GDP; the goal is to raise this figure to 10 percent.

Dendias believes Saudi Arabia has a lot of potential to develop its tourism sector, and with Greece’s vast experience in the sector, the people of the two nations have a lot to offer to one another and “many people would like to see what I’m seeing (here in the Kingdom).”

He rejected the notion that the Eastern Mediterranean and the Gulf are two geographically different regions with different threat perceptions, and asserted that they both face common challenges.

He said the challenges for the two regions come from two fronts with like-minded visions, which are moving away from peaceful relations and are in search of ways to create more challenges instead of being “good neighbors.”

“Globalization is here and threats and challenges are rather more common than they used to be,” Dendias told Arab News. “I believe that in this globalized world, things have become much closer than we believed in the past. Most countries, both the Gulf countries and the Eastern Mediterranean countries, face common challenges and common answers were required.”

Dendias said Saudi Arabia and Greece have both been in alignment on the most pressing issues, rejecting extremism and favoring stability. “We have to try to achieve this common understanding for the region,” he said. “All countries in the region should act according to international law, (the UN Convention on the) Law of the Sea, the United Nations Charter and good neighborly relations.”

Achieving good neighborly relations “should be our target,” he said, adding: “Is it easy? Probably not. Is it feasible? I would say yes.”

Dendias also touched on the thorny issue of refugees and the challenges that Greece faces as the transit point for tens of thousands of migrants and refugees trying to reach Europe from Africa and the Middle East.

In March 2016, the European Union entered into a landmark agreement with Turkey, through which hundreds of thousands of migrants had transited to reach EU soil, to limit the number of asylum seeker arrivals.

Under the deal, irregular migrants attempting to enter Greece would be returned to Turkey, and Ankara would take steps to prevent new migratory routes from opening. In exchange, the EU agreed to resettle Syrian refugees from Turkey on a one-to-one basis, reduce visa restrictions for Turkish citizens, pay 6 billion euros in aid to Turkey for Syrian migrant communities, update the customs union, and re-energize stalled talks regarding Turkey’s accession to the European Union.

However, tensions arose in spring 2020, when Ankara threatened to let hundreds of thousands of migrants into Greece before backing off.

Dendias said the migration and refugee crisis will be very difficult to resolve, especially with new tensions and crises in the Eastern Mediterranean region.

“There are countries that have instrumentalized the refugee crisis in order to apply pressure both to Greece and to the European Union for their own reasons and that is not acceptable,” he said.

He added: “It will be much easier if countries around the Mediterranean are stabilized and become functional states. I’m speaking about Syria and Libya, and we also have to address the challenge (arising) from Lebanon.

“Yet again, what we're trying to achieve now is within our European family. Greece, with the European Union, is to create a new regime to address the huge challenge of migration and the refugee problem.”

For the whole year 2015 the number of sea arrivals to Greece from Turkey amounted to 856,723. According to the UNHCR, last year 15,696 migrants crossed into Greece.

“The refugee crisis and the migration crisis is here to stay with us,” Dendias said. “We will be dealing with this issue in the foreseeable future. And we will have to be prepared for it.”

These were the details of the news Saudi aid agency delivers $1.5 million medical aid package to Pakistan for this day. We hope that we have succeeded by giving you the full details and information. To follow all our news, you can subscribe to the alerts system or to one of our different systems to provide you with all that is new.