‘Our quest is to build a Bangladesh free of hunger, poverty and illiteracy’ 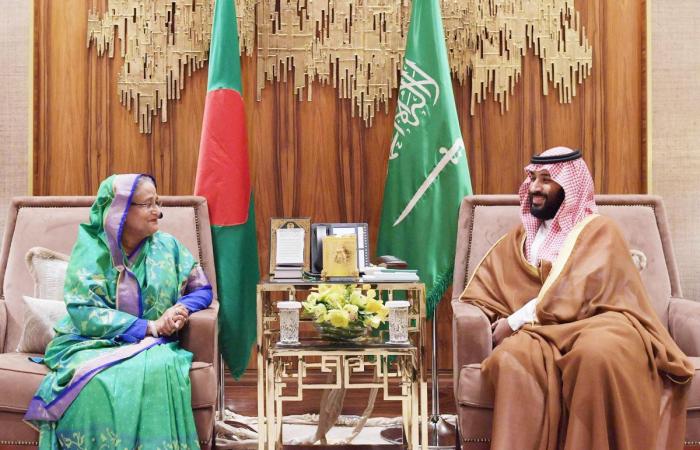 Thank you for reading the news about ‘Our quest is to build a Bangladesh free of hunger, poverty and illiteracy’ and now with the details

Jeddah - Yasmine El Tohamy - Today is March 26, our great Independence Day. Bangladesh celebrates 50 years of independence today. I extend my heartiest greetings to the countrymen and expatriate Bangladeshis on the  occasion of the golden jubilee of great independence.

On this Independence Day, I recall with deep gratitude the greatest Bengali of all time, father of the nation Sheikh Mujibur Rahman, under whose undisputed leadership we have earned our independence.

I pay my tributes to four national leaders, 3 million martyrs and two hundred thousand dishonored women of the War of Liberation. My homage goes to all the valiant freedom fighters, including the wounded ones. I extend my sympathies to those who had lost their near and dear ones during the Liberation War. I also recall with gratitude our foreign friends who had extended their support during the war.

Bangabandhu formally proclaimed the independence of Bangladesh at the first hour on March 26, 1971. The first government of Bangladesh took an oath on April 17, 1971, in Mujibnagar with Sheikh Rahman as president.

The resistance war against the occupying forces began. But under his able leadership, Bangladesh achieved its independence through a nine-month armed struggle.

In just three-and-a-half years of his government, Bangabandhu rebuilt the war-ravaged country. In 1975, the GDP growth rate exceeded 7 percent. Bangladesh gained recognition from 116 countries and got the memberships of 27 international organizations.

While Bangabandhu was building a democratic government and overcoming all obstacles, the anti-liberation forces brutally killed him along with most of his family members on August 15, 1975.

Forming a government in 2009 in consecutive three-year terms, the Bangladesh Awami League has relentlessly been working to improve the fate of the people inspired by the spirit of the great Liberation War. We are implementing the unfinished works of the father of the nation.

Today, Bangladesh is self-reliant in food production. Over the past 12 years, the poverty rate has come down from 42.5 percent to 20.5 percent. Our sovereign rights over a vast area in the Bay of Bengal have been established through the peaceful settlement of maritime disputes with Myanmar and India. The implemenwwwwwwwwwtation of the Bangladesh-India Land Boundary Agreement has put an end to the protracted inhuman life of the enclave people. The nation has become free from stigma by executing the verdict of the Bangabandhu murder case. The trial of war criminals continues and the verdict is being executed.

We have formulated the Second Perspective Plan for 2021-41 and adopted the eighth Five-Year Plan. We have started the implementation of the Bangladesh Delta Plan 2100. Today, the benefits of “Digital Bangladesh” have been expanded from urban areas to a remote village level. To offset the impacts of the coronavirus (COVID-19) pandemic, we have so far announced 23 stimulus packages that are worth 4.4 percent of our GDP.

The persistent efforts of the past 12 years of the Bangladesh Awami League government have brought the final recommendations for Bangladesh to become a dignified developing country on the eve of the golden jubilee of independence.

The persistent efforts of the past 12 years of the Bangladesh Awami League government have brought the final recommendations for Bangladesh to become a dignified developing country on the eve of the golden jubilee of independence.

This is a huge achievement for us. I firmly believe that if this trend of development continues, Bangladesh will soon be established as a developed, prosperous country in the world.

Let us take oath on this auspicious occasion of the golden jubilee of independence. Imbued with the spirit of the Liberation War, we all together will build a golden Bangladesh free of hunger, poverty and illiteracy as dreamt by the father of the nation.

These were the details of the news ‘Our quest is to build a Bangladesh free of hunger, poverty and illiteracy’ for this day. We hope that we have succeeded by giving you the full details and information. To follow all our news, you can subscribe to the alerts system or to one of our different systems to provide you with all that is new.