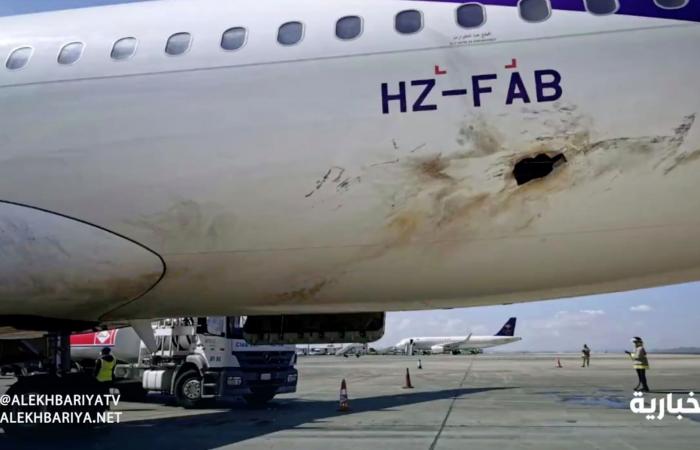 Jeddah - Yasmine El Tohamy - DUBAI: The Saudi-led Arab coalition said on Wednesday that it had controlled a fire in a civilian plane at Abha airport as a result of a Houthi attack.

The coaliton said that the attempt to target Abha airport and threaten civilian travelers is a war crime.

"We are taking the necessary measures to protect civilians from the threats of the Houthis," the coalition spokesperson Turki Al-Malki said.

Earlier on Wednesday Saudi state TV reported that the coalition had intercepted and destroyed two armed drones launched by the Iran-aligned group toward southern Saudi Arabia.

Al-Malki said in a statement that the attack had targeted civilians and civilian infrastructure.

“This is not the first terrorist attack from the Houthis, because we know the Houthis are not looking for peace,” political analyst, Hamdan Al-Shehri told Arab News.

Shehri noted that the attack comes just days after the United Nations Special envoy Martin Griffiths visited Tehran with hopes to reach a political solution to the crisis in Yemen.

The political analyst believes it is not possible to reach any solution when engaging with Iran and instead views it as the pushing force behind this Houthi attack “because Tehran is not looking for any solution to the crisis.”

It was the third day this week that the coalition said it had intercepted Houthi drones fired toward a southern region of the kingdom that borders Yemen.

“There is no point in negotiation (with the Houthis) and we also ask the Biden administration to keep them listed as a terrorist organization,” Shehri said, claiming that removing them from the list was “catastrophic”

It also follows a warning from the State Department that the Houthis must stop attacks on civilian targets.

“It would be very strange if the Biden administration keeps the Houthis off the terror list after what happened because over the past three weeks, we have seen many attacks from the Houthi side towards Saudi Arabia and also in Yemen, using ballistic missiles and drones,” he explained.

Shehri stated that attacking a civilian airport is an example of terrorist activity of the militia.

The Saudi-led military alliance intervened in Yemen in 2015 after the Houthis ousted the internationally recognized government from power in the capital, Sanaa.

The Houthis hold northern Yemen, from where they have often launched missiles and drones toward Saudi cities.

These were the details of the news Houthi attack on Saudi Arabia’s Abha Airport sets passenger plane on fire for this day. We hope that we have succeeded by giving you the full details and information. To follow all our news, you can subscribe to the alerts system or to one of our different systems to provide you with all that is new.