Al-Faisal to CNN on the news of the meeting between Netanyahu... 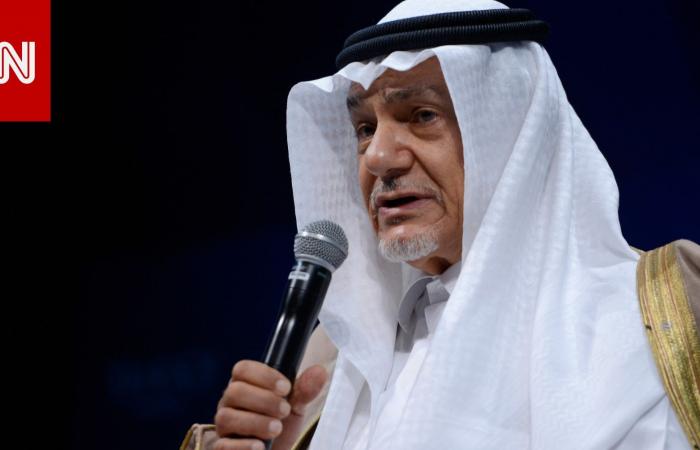 This came in part of Al-Faisal’s interview with CNN in Arabic, in which he talked about the news of the meeting between Saudi Crown Prince Mohammed bin Salman and Netanyahu, which Saudi Arabia denied. Al-Faisal also talked about Saudi relations with America and many issues in the region, including peace, the Iranian file, and the crisis Qatar and its relationship with Turkey and the Muslim Brotherhood, the Yemen war, the situation in Lebanon, in addition to the human rights situation in Saudi Arabia.

In response to a question about whether there are preparations for normalization between Saudi Arabia and Israel, Al-Faisal said: “There is no preparation for anything. The kingdom has a fixed position, and the king, in his speech to the Shura Council, stated that the Palestinian issue is the issue of the first kingdom and that the kingdom is committed to the Arab peace initiative.” : “Why is the king’s words not believable, and Netanyahu’s words true?”

As for the future of Saudi-American relations during the era of Joe Biden, Al-Faisal said, “The kingdom has a long relationship with the United States, which passed through the various parties, democracy and republican in America, and when President-elect Biden was also Vice President, relations with his then president Obama were in place.” And to some extent good. ”

Al-Faisal added, “We disagreed with some things in the past, but we are looking with President Biden, firstly, that he will be well-informed about the value of relations with the Kingdom of Saudi Arabia, and secondly, if he is really looking for relationships with friends and allies, then the kingdom is a friend of the United States.”

Al-Faisal referred to Biden’s statement that his administration would not be the “third administration” of former President Obama, and Al-Faisal said: “This is a great address and directed that he will have his own policy and his personality will impose itself on this policy. Let’s wait until we see what he means by this matter.”

Concerning the human rights activists detained in Saudi Arabia, Al-Faisal said, “They were imprisoned for security reasons, and there are trials going on around them. The Saudi judiciary is independent, and the government will not interfere in it, and when these cases are finished, they will be announced.”

These were the details of the news Al-Faisal to CNN on the news of the meeting between Netanyahu... for this day. We hope that we have succeeded by giving you the full details and information. To follow all our news, you can subscribe to the alerts system or to one of our different systems to provide you with all that is new.