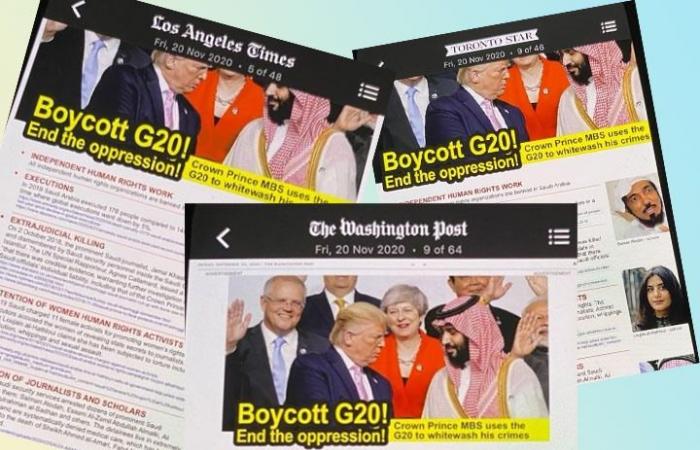 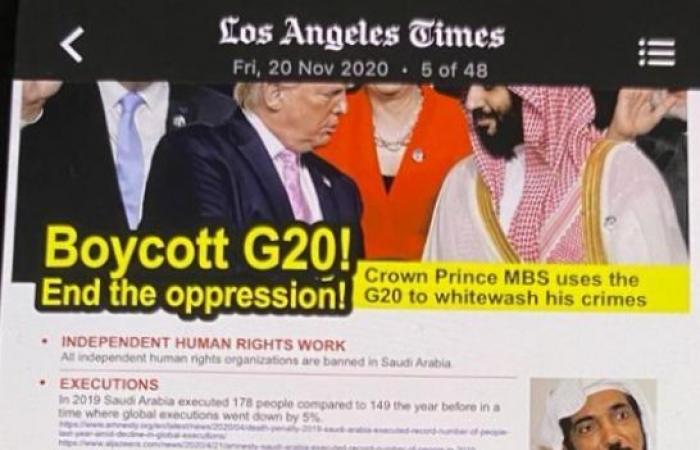 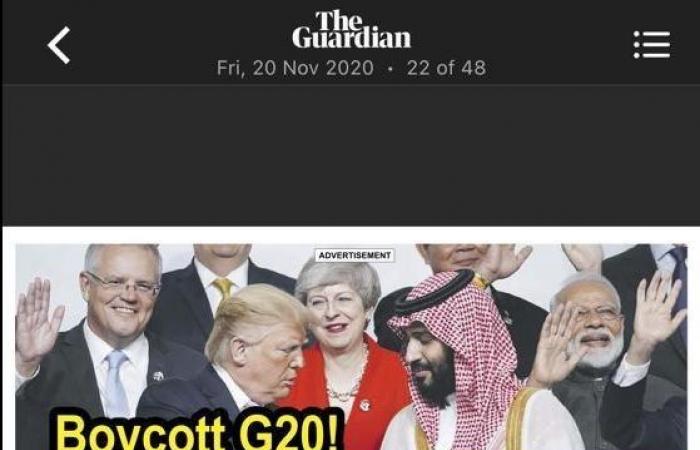 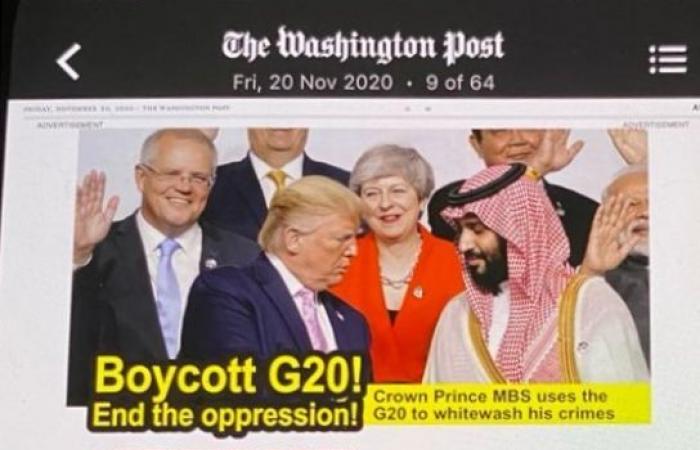 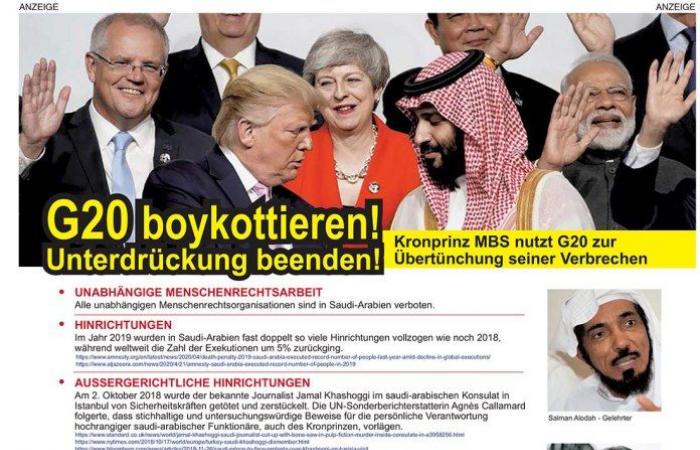 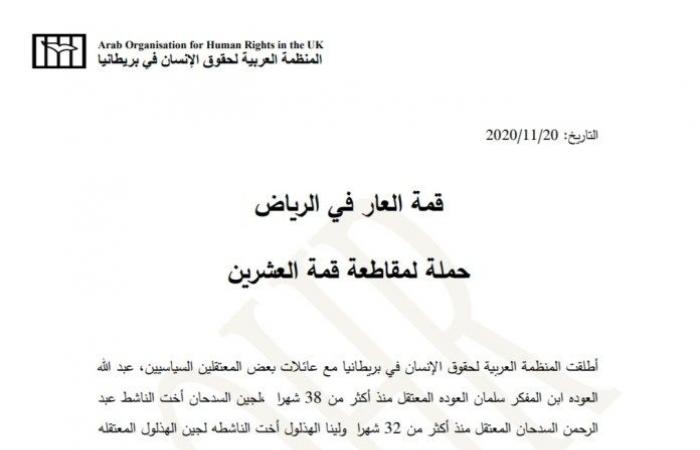 Many international newspapers were flooded Friday morning with simultaneous announcements calling for a boycott of the “G20 Summit” one day before it was held in the Saudi capital, Riyadh, in protest against human rights violations committed by the Kingdom against political detainees and activists, while the campaign calling for a boycott of the summit called the Summit Shame “because it was held in Saudi Arabia.

These announcements, which were published in many newspapers, were organized by the Arab Organization for Human Rights in Britain, which launched this campaign in cooperation with three families of political detainees in Saudi prisons, and they are: Dr. Abdullah Al-Awda, son of the detained preacher Sheikh Salman Al-Awda, and Areej Al-Sadhan, sister Political prisoner Abdul Rahman Al-Sadhan, and Lina Al-Hathloul, sister of the detainee and the most famous women’s activist in the Kingdom, Lujain Al-Hathloul.

Read also: The sister of a Saudi detainee addresses the G20 summit through “Arabi 21”

A statement issued by this global campaign, I got “Arabic 21On a copy of it: “The planned summit will be attended by leaders of the G20 countries around the world, including the United States, France, Britain, Germany, Canada and Italy, which are countries that are proud to support human rights, but on the other hand they show crude hypocrisy in providing protection for the Saudi regime in order to obtain For material gain. ”

The campaign organizers added that “the absence of accountability for human rights violators in Saudi Arabia proves that the leaders participating in the G20 summit care more about arms deals than human rights. Instead of this summit constituting a turning point in improving the behavior of the Saudi regime, it gives the green light to the Saudi authorities to continue the daily violations represented.” In suppressing dissidents who do not support his agendas and continuing to kill innocent people in Yemen.

Read also: Calls for the “G20 summit” to pressure Riyadh to release the detainees

The Arab Organization for Human Rights in Britain, along with the families of the three detainees in Saudi prisons, confirmed that “this campaign is an important step to pressure world leaders and leaders who intend to participate in the G20 summit in order to take decisive steps in the file of the war on Yemen and the file of detainees and detainees in Saudi prisons, and it confirms.” The voices calling for an end to violations and crimes will not subside unless the Saudi regime changes its approach and harmonizes its behavior in accordance with the rules of international law.

Many international newspapers participated in publishing the declaration calling for a boycott of the “G20 Summit” simultaneously, as the announcement appeared on the morning of Friday the 20th of November in prominent international newspapers such as the “Washington Post” in the United States of America, the British Guardian, and Los Angeles. The American Times, the German provider of Deutsche, and The Star in Canada.

Read also: Petition in the German Parliament calling for a boycott of the G20 summit in Saudi Arabia

The campaign aims to shed light on the grave human rights violations committed by the Saudi authorities in light of the G20 summit, to be held on Saturday and Sunday, the twenty-first and the twenty-second of this month, according to the statement issued by the campaigners.

The signatories stressed that “there is no point in holding this summit as the Saudi regime continues to arrest thinkers and activists, men and women.” 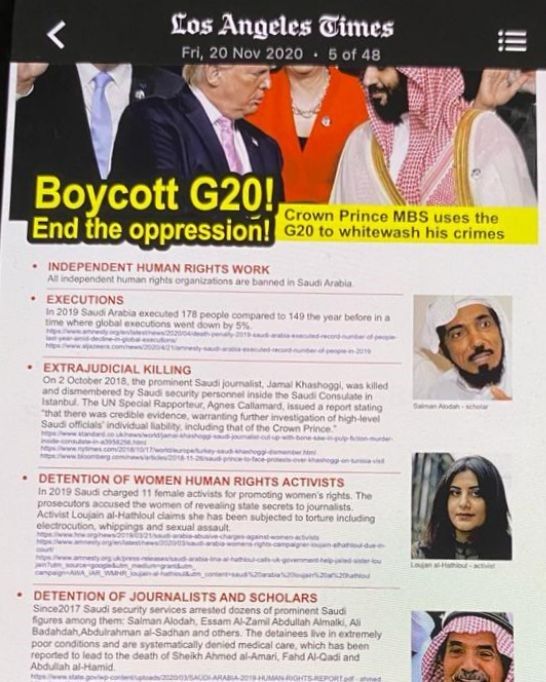 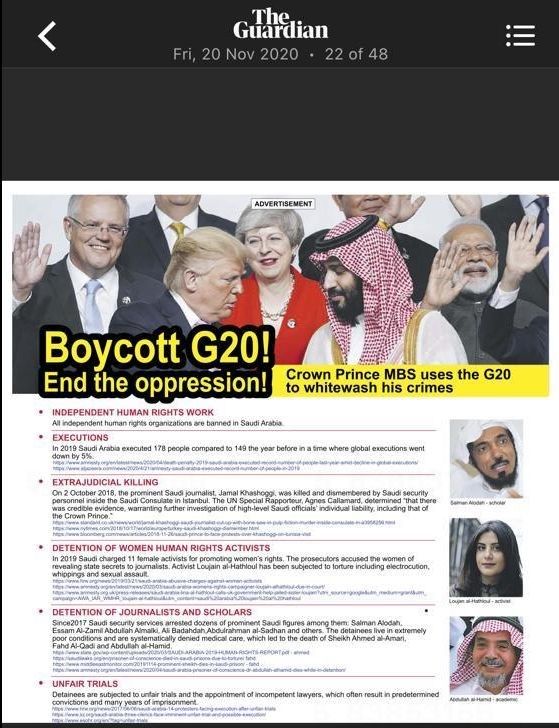 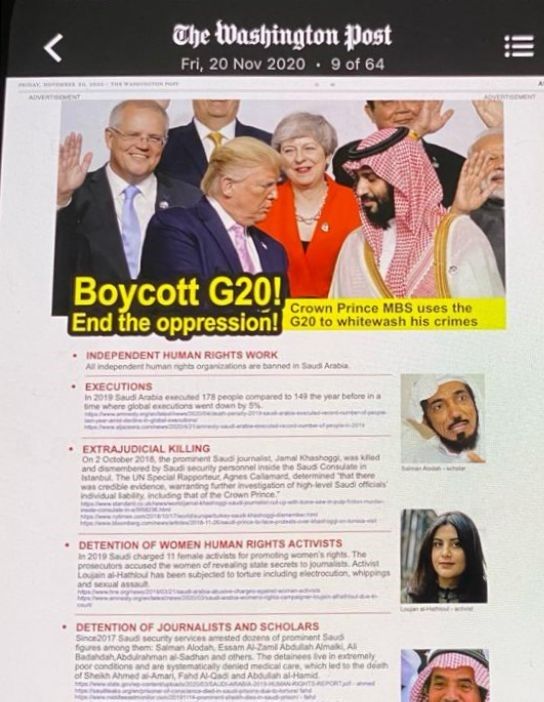 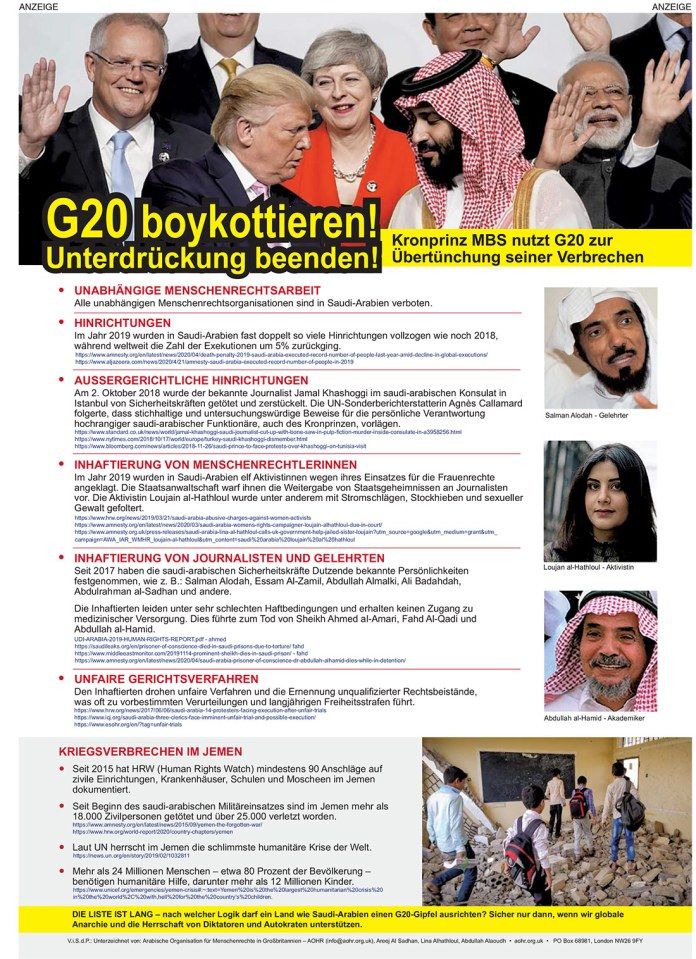 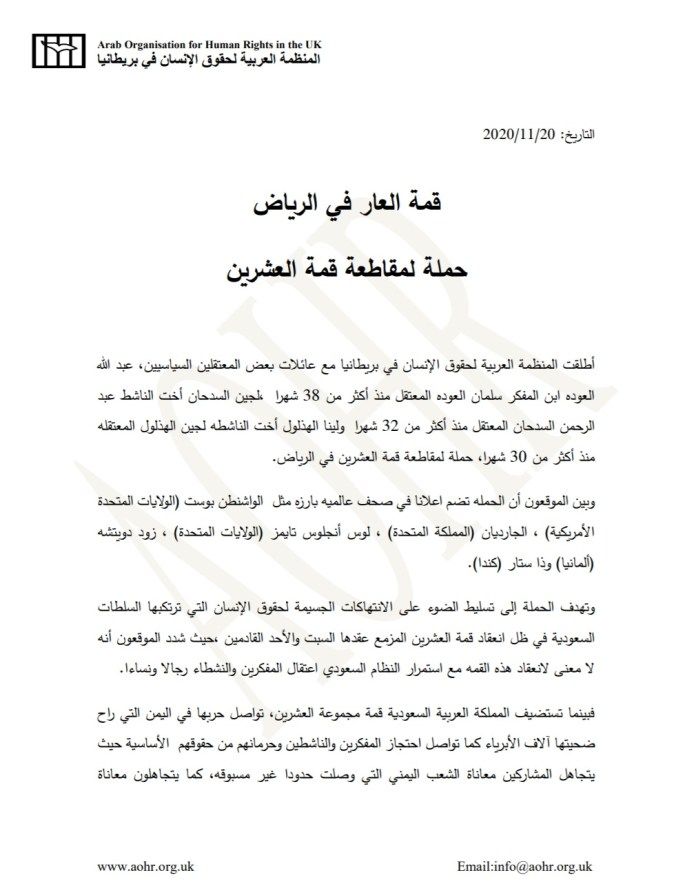 These were the details of the news A global campaign to boycott the “G20 summit” because of Saudi... for this day. We hope that we have succeeded by giving you the full details and information. To follow all our news, you can subscribe to the alerts system or to one of our different systems to provide you with all that is new.