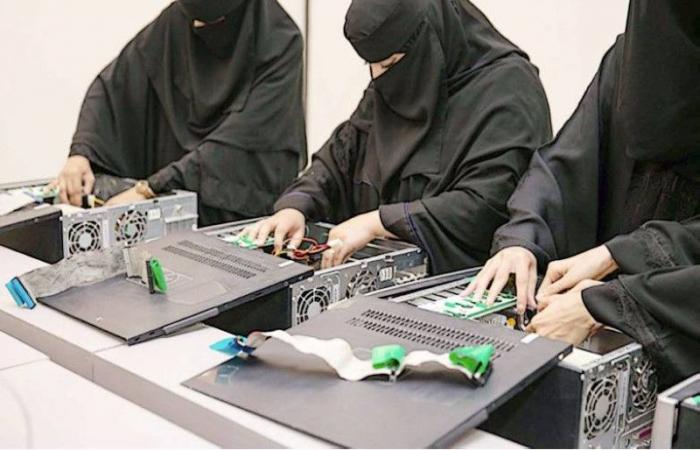 Saudi women played in the development race professionally, competing with their sisters, until they assumed leadership positions, and won many titles and awards, which contribute to accelerating the Kingdom’s path towards achieving Vision 2030.Awards, titles, and centers that have been associated with feminization recently, so the Kingdom’s name has been branded internationally with feminine names, after the Saudi leadership gave women their “freedom” and released their “hands”, after they believed in the developmental role they play in supporting the national economy and the comprehensive development plans, and the social gains that this achieves And economic and developmental for the nation, so women have imprinted their capabilities and creativity in all fields. In a new achievement to be added to the achievements of the Kingdom of Saudi Arabia, the Ministry of Communications and Information Technology announced that the Kingdom had received the International Award for Empowerment of Women in Technology “Equal”, out of 340 candidates worldwide. The award from the International Telecommunication Union (IUT) is given to distinguished organizations and initiatives worldwide. According to the Women’s Report, Business Activities, and Law 2020, the Kingdom ranked the most advanced, and it implemented 12 reforms in laws and regulations related to women.

Empowering women is one of the pillars of the communications and information technology sector strategy, through which it aims to build a digital system that embraces, develops and attracts women’s minds and skills in support of the process of digital transformation and increasing the sustainability of specific job opportunities for women in the telecommunications and information technology jobs, so inspiring success stories have been written in all sites in this sector This is vital and important, and has proven its efficiency and ability to assume the great responsibilities and achieve the great goals that are in the realization of the Ministry’s strategy, so it launched the Women’s Program in the sector and established a forum for empowering women in the sector with the aim of enhancing women’s participation in the sector, spreading awareness and enriching digital knowledge, the participation of experts in the sector, and motivating Innovation and entrepreneurship.

The percentage of women’s participation in the labor market in the Kingdom increased to 30%, and the number of female entrepreneurs doubled to 40% of the total number of entrepreneurs. The indicators of the first quarter of 2020 showed through the report issued by the General Authority for Statistics that empowering Saudi women and increasing their participation in the labor market It is growing, in accordance with what the Kingdom’s Vision 2030 calls for. The Ministry of Human Resources and Social Development has taken steps to target Saudi women within its objectives, through empowerment, training and leadership programs to enhance the participation of women in leadership as decision makers and enable them to assume leadership positions.

Ahmed Al-Ghamdi, Vice President of Human Resources at the Saudi Telecom Company, told “Okaz”: “We always strive to achieve the Kingdom’s 2030 vision, and empowering women is one of the important strategies that the company has adopted and sought to achieve and implement on the ground, as this is a reflection of our commitment to implementing the strategy. The company and its values ​​embodied in dedication, courage and vitality, the company launched the Women’s Council, which is the first council of its kind to empower women and enhance their participation in the labor market.

For his part, the CEO of stc Group, Eng. Nasser bin Sulaiman Al-Nasser, believes that empowering women in the group is not only limited to employment and leadership positions, but also comes in the form of providing an opportunity for the continuous development of female colleagues, which is what the company is working on by providing access to educational resources and enriching their knowledge. And increase their experience in the areas required to achieve the company’s strategy, as well as their involvement in the company’s development programs, such as the development program for specialists, pointing out that female employees represent about 33% of the organizers of the program.

It is noteworthy that the “Women’s Council” in the Saudi Telecom Company includes 16 female employees to represent their sectors and work on identifying defects in the work experience, in addition to providing the company with a channel to express their views and suggestions to help develop the work environment.

The number of female employees in the company increased during the current year 2020 by 22.6% compared to the previous year, while the percentage of female employees who were nominated for leadership positions increased significantly and became 18% members of the HIPO program, which is the most important program in the company to prepare distinguished employees to occupy leadership positions in the future. The number of the group’s employees reached 3 thousand, within only 3 years of the company’s start to employ women.

This came during the nineteenth annual meeting of the council, which was held at the headquarters of the King Abdulaziz City for Science and Technology in Riyadh, headed by the president of the city, Chairman of the Supreme Council of the Award, Dr. Anas bin Faris Al-Faris, and the Chairman of the Board of Directors of Almarai Company, Deputy Chairman of the Supreme Council of the Award Prince Nayef bin Sultan bin Muhammad bin Saud Al-Kabeer, His Excellency Dr. Khaled bin Muhammad Al-Sulaiman, the Director of King Faisal University, Dr. Muhammad bin Abdulaziz Al-Ohali, the Vice President of King Fahd University of Petroleum and Minerals for Studies and Applied Research, Dr. Sahl Abdul-Jawad, the Vice President of King Abdulaziz City for Scientific Research Support Dr. Abdulaziz Al-Malik, and the Secretary of the Prize Engineer Badr Al Farhan .

Where the Distinguished Scientist award came equally between Dr. Muhammad Al-Daoudi and Dr. Othman Muhammad Bakr, from KAUST University; In his research, Professor Osman Bakr is interested in the chemical and physical aspects of nanomaterials. His team is studying the synthesis and composition of organic and inorganic hybrid nanomaterials with innovative optical, electronic and magnetic properties. The purpose of these studies is to manufacture advanced materials that promise to be components for building solar cells, batteries, signal transmission devices, and optoelectronic devices.

Dr. Al-Daoudi expressed his appreciation for this award, saying, “It is a great honor to receive the Almarai Distinguished World Branch Award for this year. This award is a tribute to my scientific contributions to scientific research over the past two decades. He added, “There is no doubt that this award represents a great incentive for us to make more efforts to face the chronic challenges by activating new porous materials that are innovative and manufactured in KAUST.” He added, “These materials have a unique effectiveness in reducing carbon dioxide emissions in a sustainable manner, effectively applying the stages of a circular carbon economy and contributing to the realization of the Kingdom’s 2030 vision.”

“It is a great honor for me to receive this prestigious award,” said doctoral student Iman Boudlaiwa about winning the award. I owe my heartfelt thanks, after God, to my academic supervisor and to KAUST, for what he provided for me during my research career of unlimited support, guidance and training.

On the occasion of winning the award, master’s student Abdullah Yusuf al-Salloum said: “This achievement comes after the support of the family and the wise leadership of scientific research with the aim of developing the future of the Kingdom and its economy.”

At the end of its annual meeting, the Supreme Council of the Award congratulated all the award winners and winners in its nineteenth session, wishing that it would be a catalyst and motivation for them towards more effort and creativity in their scientific and practical life.

These were the details of the news Men’s sisters “feminine” international awards and titles – Saudi Arabia News for this day. We hope that we have succeeded by giving you the full details and information. To follow all our news, you can subscribe to the alerts system or to one of our different systems to provide you with all that is new.