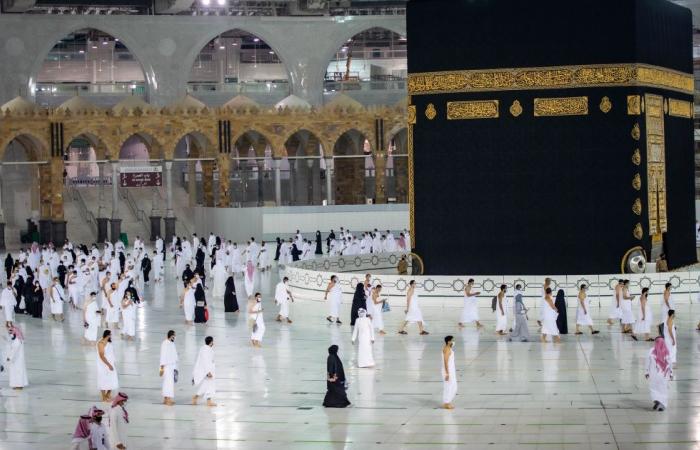 The Saudi authorities announced partially allowing the performance of Umrah rituals for those coming from abroad after a ban that has continued since last March due to the spread of the Coronavirus pandemic, while a US university research stated that the election conferences of President Donald Trump’s campaign resulted in more than 30,000 people being infected with the virus.

The Saudi News Channel (official) stated yesterday that the third phase of the gradual return to performing Umrah began at midnight on Saturday at the time of Makkah Al-Mukarramah, and the channel added that it will allow performing Umrah, visiting and prayers for citizens and residents from inside and outside the Kingdom.

The third stage for the gradual return of Umrah rituals is to allow 20,000 pilgrims and 60,000 worshipers per day from the capacity of the Grand Mosque, taking into account the precautionary measures to confront the virus, and the Ministry of Hajj and Umrah said yesterday, Saturday, that the first batch of pilgrims abroad will arrive on Sunday.

Yesterday, Saturday, Saudi Arabia recorded 402 new infections with the virus, with 19 deaths, bringing the total number of infected people to 347,282 cases, including 5402 deaths, with more than 33,000 recoveries recorded.

And in the United States, I concluded a study It was achieved by Stanford University that the election events organized by the Republican candidate Trump’s campaign resulted in the infection of more than 30,000 people with the Corona virus. The research, published yesterday, Saturday, suggested that Trump’s election rallies caused the deaths of more than 700 people, but not necessarily those who attended the rallies.

The study tracked 18 President Trump’s election rallies between July 20 and September 22, in addition to analyzing statistics of new infections with the virus during the weeks that followed these speeches.

The researchers said that the results of this paper support the warnings and recommendations of public health officials regarding the risk of corona transmission in large gatherings.

The study was based on a statistical model, and not on actual investigations of cases of coronavirus infection. The study did not cite pathology experts among its authors nor was it subject to peer review.

Amish Adalja, an infectious disease expert at the Johns Hopkins Center for Health Security, described the results of the research as “suggestive,” and said, “I would just say that it is suggestive, but it is difficult to isolate the specific effect of a single event completely without strong contact tracing data.”

And in Europe, Britain announced yesterday, Saturday, a general lockdown in the country, starting from next Thursday, after the number of new infections with the Coronavirus (Covid-19) exceeded the one million mark.

British Prime Minister Boris Johnson said that the country will enter a nationwide lockdown from next Thursday that will last for four weeks, in a major shift in his strategy after warnings that the current domestic restrictions system could flood hospitals.

“The time has come for action, given that there is no alternative,” Johnson said in a televised speech from government headquarters, adding that “the virus is spreading even faster than the logical worst-case scenario set by our scientific advisers.”

On Saturday, Austria also announced the imposition of a night curfew and the closure of cafes, bars and restaurants, except for home delivery services, with the arrival of Coronavirus infections to a level close to the limits of the maximum capacity of hospitals in the country.

With daily infections reaching a record number on Friday and 5,627 cases were recorded, which is close to the level of 6,000 cases that the government says hospitals cannot handle, the government was forced to act.

The curfew will continue from eight in the evening until six in the morning of the next day, starting next Tuesday, and continuing until the end of November, and restaurants, bars and cafes services will be limited to home delivery services, while theaters and museums will be closed as well as sports activities inside the halls. Closed, as for hotels, they will be restricted to a small number of guests, such as business travelers.

In Portugal, the authorities said yesterday, Saturday, that they will impose a partial closure, starting next Wednesday, in an attempt to limit the spread of the Covid-19 epidemic, and the restrictions of this closure will affect nearly 70% of the country’s population, as the range of measures imposed two weeks ago in 3 municipalities in the north of the country were expanded to include 121 municipalities out of 308.

In Spain, Prime Minister Pedro Sanchez condemned Saturday a series of violent protests in a number of cities in the country, to reject the restrictions imposed by the authorities a few days ago to prevent a further outbreak of the pandemic, as the authorities decided to impose a health emergency for a period of 6 months.

The total number of people infected with the virus in Spain reached more than one million and 185 thousand, and the disease killed more than 35,878 people, which makes the country the fifth largest focus of the virus in the world, after the United States, India, Brazil, Russia and France.

Clashes took place between protesters and police officers Barcelona The second largest city in Spain, and in the northern city of Logroño, and in the city of Haro as well.

In Greece, the authorities decided on Saturday to tighten precautionary measures to combat the virus, including closing restaurants and bars in overcrowded areas for a month.

Greek Prime Minister Kyriakos Mitsotakis said in a televised address that these new rules, the first of their kind since Greece lifted its initial closure last May, are based on two sources that lead to the spread of the virus, namely entertainment and the movement of citizens.

A statistic told the French Press Agency that the number of hospitalizations related to the Coronavirus hit a record high in at least 14 European countries last week, with the start of the second outbreak. And the countries most affected are the Czech Republic, with 62 treatment cases per 100,000 people, followed by Romania with 57, Belgium with 51, and Poland with 39.

These were the details of the news Corona … Saudi Arabia allows pilgrims to come abroad, and Trump... for this day. We hope that we have succeeded by giving you the full details and information. To follow all our news, you can subscribe to the alerts system or to one of our different systems to provide you with all that is new.