Kuwait seeks Saudi support at the start of a new era... 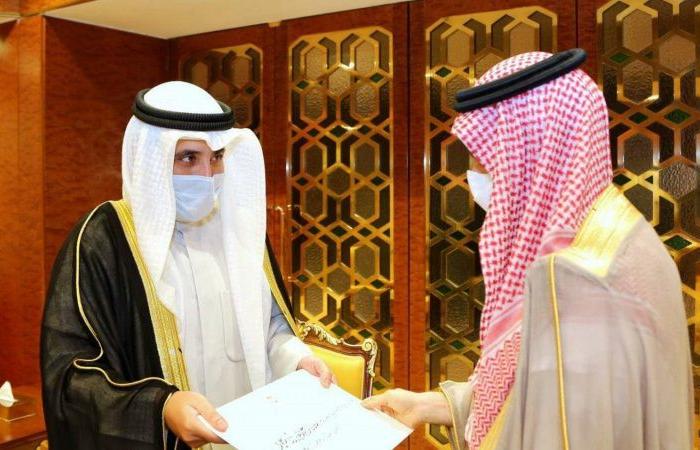 Kuwait – Gulf sources ruled out that Kuwait, led by the new Emir Sheikh Nawwaf Al-Ahmad Al-Jaber Al-Sabah, is about to resume mediation efforts to end the boycott by Saudi Arabia, the UAE and Bahrain to Qatar, considering that the new Kuwaiti leadership is still searching for its balance in the midst of internal problems, on top of which is the severe financial crisis resulting from the decline Oil prices, in addition to its preoccupation with calming the conflicts between the wings of the ruling family that came out into the open at the end of the reign of the late Emir Sheikh Sabah Al-Ahmad, and preparing to enter a new phase after the legislative elections scheduled for next December, the results of which will depend on the level of political stability in the country and the extent of consensus or disharmony. Between the legislative and executive powers.

Informed government sources said that the written message conveyed by the envoy of the Emir of Kuwait Sheikh Nawaf Al-Ahmad, Minister of Foreign Affairs and Acting Information Minister, Sheikh Ahmed Al-Nasser to Saudi King Salman bin Abdul Aziz, included “consultation and coordination at all levels and fields, including the Gulf dispute and the security and economic challenges facing Region”.

Since Riyadh, Abu Dhabi and Manama announced its boycott of Doha in the summer of 2017 due to its ties to the militant organizations and its pursuit of policies threatening the region’s stability and security, Kuwait has not been able to break through the wall of the dispute, even though the one who led the mediation attempts was Sheikh Sabah Al-Ahmad with all his Long accumulated experiences in the diplomatic work and his charisma, and the favor he enjoys among Gulf leaderships, especially the Saudi leadership.

Gulf sources considered that mediation in this thorny file is not one of the priorities of Sheikh Nawaf Al-Ahmad and his Crown Prince Sheikh Meshaal Al-Ahmad, and that their interest at the present time is focused on preserving the traditional Saudi bond to Kuwait, whose importance increases in critical junctures and in times of crisis.

Among the burning files facing the new ruling staff in Kuwait is the economic and financial file, as Kuwait found itself due to its almost complete dependence on oil in the face of a severe financial crisis that reached the point of questioning Minister of Finance Barak Al-Sheitan about the state’s ability to pay the salaries of its employees for the month of November.

The Corona pandemic exacerbated the crisis due to the restrictions it imposed on many economic activities and the burdens it entailed to confront the epidemic and implement the necessary measures to limit its spread.

Financial and economic circles wondered about the possibility of Kuwait resorting to seeking assistance from Gulf countries to overcome its financial crisis, similar to what the Sultanate of Oman has done, which in turn is facing a severe financial crisis.

A Gulf diplomat who previously worked in Kuwait said that Sheikh Nawwaf, who does not have Sheikh Sabah’s experience nor the elements of his exceptional personality, does not dare to initiate mediation that Saudi Arabia may not be willing to do, and that he will not initiate interference in the Qatari Gulf file unless he receives a clear green light from Riyadh.

The same diplomat pointed out that the Kuwaiti leaders, upon their ascension to power, used to search for a “Saudi blessing” that would complement the legitimacy that they obtained internally.

Regarding the message that Sheikh Nawwaf sent to King Salman, the Kuwaiti newspaper Al-Qabas, Friday, on its website, quoted government sources as saying that coordination with the Kingdom of Saudi Arabia comes as it is essential and central in the region, adding that the message includes relations between the two countries, and means of supporting and strengthening them in various In areas and at all levels, in addition to issues of common interest and the most important regional and international developments.

On the Saudi side, the official Saudi Press Agency “SPA” confined itself to saying that King Salman had received a written message from Sheikh Nawaf Al-Ahmad Al-Jaber Al-Sabah, Emir of the State of Kuwait, explaining that Prince Faisal bin Farhan, Minister of Foreign Affairs, received the message during his reception in Riyadh, Sheikh Ahmed Nasser Al-Muhammad Al-Sabah, Kuwaiti Foreign Minister , Without details of the message.

The ruling family in Kuwait was able, despite the ongoing differences between its members and wings, to achieve a smooth shift of power following the death of the former Emir Sheikh Sabah, as Sheikh Nawaf Al-Ahmad assumed power after him, who chose Sheikh Meshaal Al-Ahmad as crown prince without any problems.

Despite this, Sheikh Nawwaf inherited a legacy burdened with economic as well as political problems that make his start in ruling the country difficult, which increases his need for Saudi bonds.

Despite the state of stability in Kuwait, it remains exposed to dangers and problems imposed by its geographical proximity to Iran, which is not considered a safety and reassurance factor for Kuwaitis after they witnessed its involvement on more than one occasion in plans and actions that disturb the security of their country. Kuwait’s unstable neighborhood with Iraq, which is controlled by pro-Iranian political forces and extremist Shiite militias operating on its territory, remains a source of concern for Kuwait and its leadership. Saudi Arabia and the Gulf region, on the other hand, represent a necessary depth and a basic support for Kuwait, which is governed by its small geography and limited population.

These were the details of the news Kuwait seeks Saudi support at the start of a new era... for this day. We hope that we have succeeded by giving you the full details and information. To follow all our news, you can subscribe to the alerts system or to one of our different systems to provide you with all that is new.