Ownership of foreign shares in the Saudi market falls by 368.6... 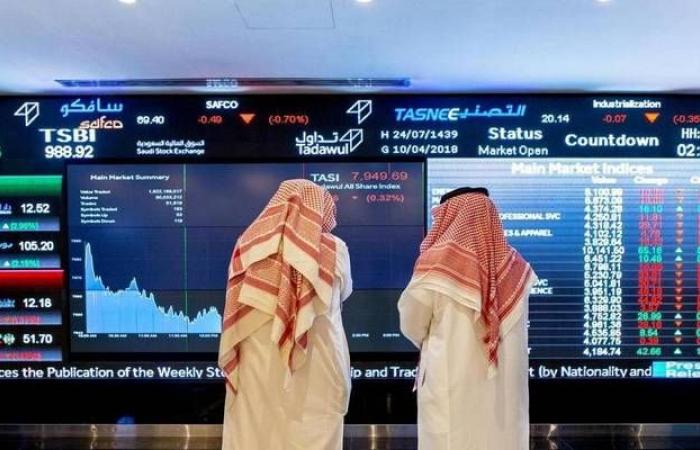 Riyadh – Mubasher: The Saudi stock market, Tadawul, witnessed a decline in the value of shares owned by foreign, Gulf and Saudi investors during last week’s trading, ending on October 22..

Saudi investors’ ownership of shares included in the main index of the Saudi market “TASI” amounted to 8.857 trillion riyals, compared to 8.943 trillion riyals in the previous week ending on October 15th..

As for foreigners, their total ownership amounted to 203.579 billion riyals, up from 203.948 billion riyals in the week ending on October 15th..

The ownership percentage of strategic investors increased to 40.043 billion riyals, a rate of 0.44%.

The value of Gulf investors’ ownership in the Saudi stock market reached 42.90 billion riyals by the end of last week, compared to 43.43 billion riyals in the previous week..

The ownership of the Gulf countries with respect to the issued shares stabilized at 0.47%, while the free-lance declined to 2.30%, compared to 2.32% in the previous week..

The Saudi stock market – Tadawul – witnessed a negative performance to change its course during the week after rising for three consecutive weeks, in light of the rise of most of the leading sectors..

The Saudi stock market is declining during the week, and losses exceed 87 billion riyals

Foreigners are recording a net purchase of 497.6 million riyals in Saudi stocks within a week

These were the details of the news Ownership of foreign shares in the Saudi market falls by 368.6... for this day. We hope that we have succeeded by giving you the full details and information. To follow all our news, you can subscribe to the alerts system or to one of our different systems to provide you with all that is new.