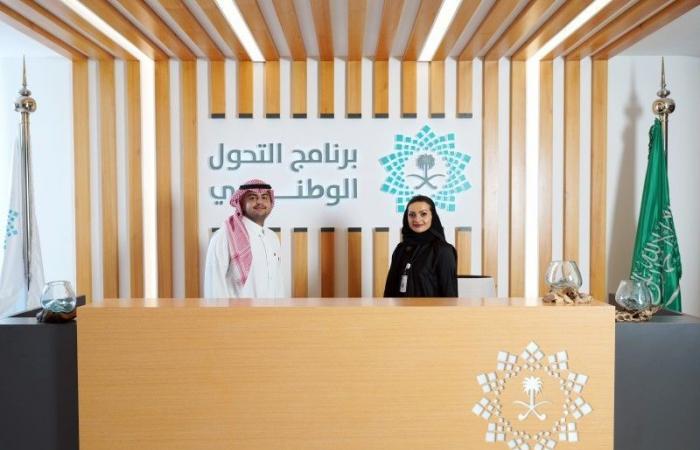 For 4 years, the National Transformation Program has continued its rapid progress towards achieving excellence in government performance, enhancing economic potentials, and upgrading the standard of living services, by accelerating the pace of implementation of basic and digital infrastructure projects, and engaging beneficiaries in identifying challenges, creating solutions and evaluating the performance of the program as the first program The Saudi Vision 2030 implementation is the largest in terms of the strategic objectives assigned to it.And in the steps of the trustworthy towards contributing to empowering the private sector, raising the attractiveness of the labor market, empowering society groups, ensuring the sustainability of vital resources, developing the tourism and non-profit sectors, in addition to raising the quality of government services provided to individuals, the private and non-profit sectors, and improving the social services system, health care and safety levels. Since its inception, the program has managed to reach far beyond its goals, assuring the Saudis that their great dream of building a vibrant society, a prosperous economy, and an ambitious nation, is easy for souls of their own emotions, and with the determination of men who can achieve what they want their homeland to be in 2030.

The language of numbers

On the same approach that Crown Prince Mohammed bin Salman prefers to work on, according to his statement in the Future Investment Initiative in Riyadh 2018, “The numbers speak”, the figures accomplished through the “National Transformation” program show the Kingdom and its leaders’ commitment to their promises, and the extent of development and progress it has witnessed. The Kingdom in the past 4 years, as the program has so far reviewed the most prominent achievements of 3 ministries through the National Transformation Program (the Ministry of Health, the Ministry of Justice, and the Ministry of Communications and Information Technology). The first place in the business environment reforms according to the Doing Business 2020 report issued by the World Bank Group, the 49th position globally in the e-commerce index issued by the United Nations Conference on Trade and Development in 2020, the first place at the level of the Gulf countries and the second at the level of the Arab countries in the reforms of laws and regulations. Related to the empowerment of women according to the report (Women, Business and Law 2020) issued by the World Bank Group, and the first globally in the speed of fifth generation networks For 2020, according to the British company OpenSignal, the second place among the twenty economic countries in allocating frequency bands for the year 2020, and the eighth place among the twenty economic countries in the digital infrastructure index issued by the United Nations to measure the development of e-government for the year 2020, after the Kingdom’s progress in this indicator 40 Ranking from the previous report, while reflecting the recent technical development of the Kingdom of Saudi Arabia.

As part of the remarkable development in the telecommunications infrastructure in the Kingdom of Saudi Arabia during the past 3 years, the speed of the Internet in the Kingdom increased from 9 Mbps in 2017 and has now reached 77 Mbps, and the percentage of population coverage of Internet service in the Kingdom has reached 99%, in addition to the deployment of optical fiber networks, where the number of covered homes has reached more than 3.5 million homes, and this progress is reflected in the global rankings and indicators, as the Kingdom achieved the first place in the world in the speed of loading of the fifth generation networks according to the OpenSignal report, and the fourth globally in the spread of Fifth generation technology, and in the latest achievement in the technical field, the Kingdom achieved first place in digital competitiveness among the G20 countries.

In addition to this, the most prominent programs and training camps launched by the National Transformation Program were reviewed with the aim of qualifying Saudi competencies in the digital field, bridging the digital gap and promoting innovation, such as the “Technology Pioneers” program that targets innovative entrepreneurs to develop their skills and abilities and equip them with artificial intelligence skills, in which 350 participated. Innovative and innovative, and the value of the incentives for each project reached 150,000 riyals, and the global Hackathon that launched after the emergence of the Corona pandemic to come up with innovative ideas and solutions that help overcome the Corona crisis and future crises, and the number of nominated ideas has reached more than 450 ideas, and the total of hackathon prizes is one million Saudi riyals, In addition to the ThinkTech digital knowledge platform initiative, which aims to spread digital awareness about emerging technologies and create a stimulating digital environment, which has benefited more than 3 million beneficiaries so far.

In addition to the initiatives led by the Ministry of Health, the National Transformation Program reviewed, through its Twitter account, the initiatives and achievements in the health sector, most notably: the “Sehha” application, which provided 1.5 million consultations for 1.8 users in 2020, and the “Mawid” service that was booked. 53 million appointments for more than 13 million beneficiaries, the “My Wasabi” service that provided more than 4 million prescriptions by August 2020, the “Sehaty” application, the server for more than a million beneficiaries and beneficiaries, and the “Rassd” electronic drug tracking system that was able to subject all medicines to an electronic tracking system. In addition to the development of the National Transformation Program for some 937 services, which provided medical consultations for more than 16 million calls until August 2020, and the program’s contribution to achieving 60% of the average American hospitals to measure the culture of patient safety until 2019, and to increase the number of primary health centers that operate on a working system. It reached 352 centers, 100 of which operate 24 hours a day, and 252 over 16 hours, and to achieve the goal set for “strengthening prevention against health risks”, the program launched the National Center for Disease Prevention and Control “Weqaya”, and achieved a great achievement in One of the most important indicators is the “Road Traffic Death Index / 100,000 People”, as the index recorded a decrease between 2016 and 2019, estimated at 41%.

Within the framework of the digital transformation of the justice system, the initiatives of the National Transformation Program have contributed to facilitating access to justice services and raising their quality, through a number of electronic programs and services, such as the “Najis” platform that provides more than 120 justice services, and the number of beneficiaries of them reached more than 10 million beneficiaries. And the “mutual” platform through which more than 290 thousand sessions were held and ended, and more than 10 thousand judgments were issued for electronic pleading cases, in addition to the “Nafez” platform for executing bonds that serve more than 14 thousand individuals, 12 government agencies and banks, and the Justice Operations Center. To follow up on the work of the Ministry’s sectors, which contributed to the achievement of the execution courts reaching 82% and the personal status courts ’completion rate to 59%, the electronic payment service that reduced the duration of the payment process from two weeks to 24 hours only, and the automation of judicial sessions, as the number of sessions held and ended reached more than After so far, more than 255 thousand sessions, in addition to other services to facilitate the beneficiaries’ access to justice services, such as the “Najis” model justice center, the unified call center (1950), and mobile notaries for the service of those unable to attend the offices of writing Justice, such as the elderly, people with disabilities, hospital inmates, and Shamal centers to implement the provisions of vision and custody in an environment suitable for family members.

These were the details of the news “National transformation” … on the right path – Saudi News for this day. We hope that we have succeeded by giving you the full details and information. To follow all our news, you can subscribe to the alerts system or to one of our different systems to provide you with all that is new.