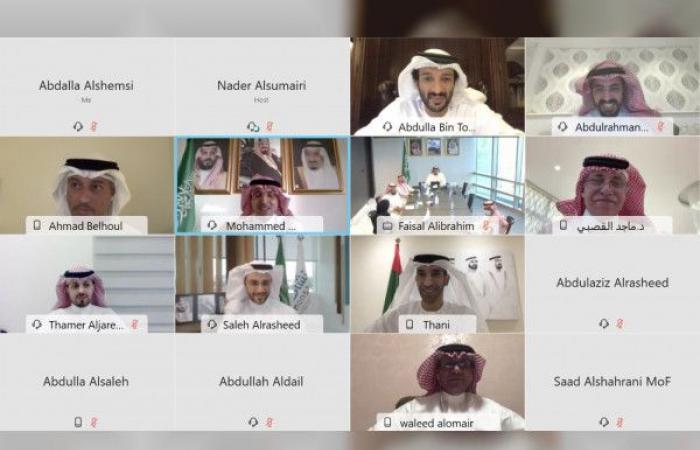 ABU DHABI, 24th October, 2019 (WAM) – His Excellency Abdullah bin Touq Al Marri, Minister of Economy, affirmed that the relations between the United Arab Emirates and the Kingdom of Saudi Arabia represent a unique and advanced model at the world level in partnership, solidarity and joint action, supported by the mutual will and wise direction of the wise leadership in both countries. And it is strengthened by brotherhood and unity of attitude towards various issues, and close cooperation in all development fields, especially in the economic and commercial aspects.

During the meeting, the two sides discussed aspects of the Emirati-Saudi cooperation in the economic, trade and investment fields during the next phase, stressing the strategic role that the Saudi-Emirati Coordination Council plays as a main platform to advance and plan the efforts and initiatives of partnership and cooperation between the two countries in accordance with a long-term vision.

The meeting dealt with ways to enhance the existing strategic partnership to new levels, by increasing and diversifying trade exchange, facilitating the movement of goods and products between the UAE and the Kingdom, developing Gulf trade relations with global markets, and enhancing communication at the private sector level to establish successful commercial activities and bilateral investment partnerships, as well as cooperation in The fields of innovation, technology, entrepreneurship and support for emerging companies, as well as the sectors of civil aviation and food security, and the opportunities provided by the Dubai Expo, which will start next year.

The ministers also discussed the most prominent developments in the regional and global economic conditions, and the two parties exchanged views on the methodology and mechanisms followed by the two countries to face the repercussions of the Covid-19 pandemic on the economic and commercial activities in each of them, stressing the importance of coordinating efforts bilaterally and at the international level to build an effective response that ensures achieving results Positive and sustainable.

His Excellency Abdullah bin Touq Al Marri said that the partnership of the United Arab Emirates with the Kingdom of Saudi Arabia is a comprehensive strategic partnership based on firm principles of brotherhood and cohesion. We will continue to work hand in hand with our brothers in the Kingdom to move to a new stage of cooperation in various economic fields, and we will focus on supporting and facilitating intra-trade, increasing mutual investment opportunities, and we will be keen to achieve competitive gains and advantages for the UAE and Saudi economies and create new opportunities in the field of export for companies The two countries, and we will work to form joint working groups between the two sides to follow all axes of cooperation and partnership.

For his part, His Excellency Dr. Ahmed Belhoul Al Falasi, Minister of State for Entrepreneurship and Small and Medium Enterprises, praised the strategic partnership and strong fraternal relations between the UAE and the Kingdom of Saudi Arabia, stressing the importance of expanding areas of cooperation with a focus on the SME sector and entrepreneurship as a common denominator among the priorities of the plans. The economic development of the two countries, explaining the importance of continuing the progress made by the two sides in this field, by developing initiatives to link entrepreneurs in the two countries, and launching programs to enhance commercial opportunities for small and medium-sized companies in the UAE and their Saudi counterparts. His Excellency also stressed the importance of cooperation and exchange of experiences in indicators measuring innovation and supporting emerging companies based on innovation and technology.

For his part, His Excellency Dr. Thani Al-Zeyoudi, Minister of State for Foreign Trade, said that the trade and investment ties between the two brotherly countries are distinguished and are witnessing continuous growth, stressing that this represents a catalyst towards more joint work to preserve the prosperity of economic relations and the development of cooperation in various sectors of common interest.

He added that the UAE and Saudi Arabia are the two largest Arab economies, and they have a clear and ambitious future vision, and we will work through joint cooperation efforts to invest the huge developmental components of both sides, facilitate trade movement to move the rate of trade exchange to higher levels, enhance investment opportunities for companies of the two countries, and explore more promising opportunities. In new activities and sectors, as well as knowledge exchange and cooperation in developing and attracting skills in various priority areas.

For his part, His Excellency Mohammed bin Abdullah Al-Jadaan, Minister of Finance and Acting Minister of Economy and Planning in the Kingdom of Saudi Arabia, affirmed the strength of the strategic partnership between the Kingdom of Saudi Arabia and the sisterly State of the United Arab Emirates, especially at the economic and commercial levels, which is already witnessing high growth rates, supported by economic and commercial potentials and capabilities. Enjoyed by the markets of the two countries.

His Excellency added that there are broad steps taken by the two sides to enhance opportunities for economic cooperation, both at the level of government institutions as well as the private sector, and to encourage exploring opportunities for new partnerships and priority development projects, in a way that translates into the strength of the strategic partnership between the two brotherly countries. His Excellency also thanked the UAE for its active and positive participation in the G20 meetings chaired by the Kingdom of Saudi Arabia during the current session.

For his part, His Excellency Dr. Majid Al-Qasabi, Minister of Trade and Investment in the Kingdom of Saudi Arabia, stressed the importance of continuing efforts to exchange experiences between the two countries in various fields of common interest, and supporting all efforts aimed at developing an advanced model for economic cooperation that creates investment and commercial opportunities for the business community. It fulfills the aspirations and developmental goals of the two brotherly countries.

His Excellency Al-Qasabi agreed with His Excellency bin Touq’s proposal regarding the formation of a joint Emirati-Saudi work team to coordinate in the fields of investment, innovation, entrepreneurship and foreign trade, in order to enhance economic and investment cooperation and support the development efforts of the two countries.

It is noteworthy that the volume of trade exchange between the UAE and the Kingdom of Saudi Arabia is the highest among the countries of the Gulf Cooperation Council, with a total value of 113.2 billion dirhams / about 31 billion dollars / in 2019, with a growth of 5% compared to 2018, and the Kingdom is the third largest trading partner of the country. The UAE in the world, and the first Arab partner.

These were the details of the news Emirates News Agency – Economy ministers discuss ways to develop UAE... for this day. We hope that we have succeeded by giving you the full details and information. To follow all our news, you can subscribe to the alerts system or to one of our different systems to provide you with all that is new.