Exposing the damage caused by the Tanuma fire in Saudi Arabia... 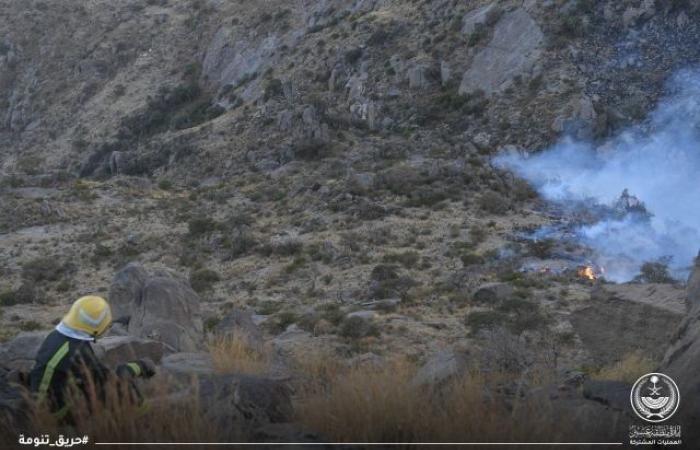 The Emirate of Asir in Saudi Arabia revealed that the rate of extinguishing the fire of Jabal Ghulama in Tanuma in southern Saudi Arabia reached on the third day from 70 to 75%, with the concerted efforts of the participating parties and support teams.

The emirate revealed, through its account on the social networking site Twitter, that the damage caused by the fire has so far been limited to natural damage through the loss of juniper trees, shrubs and dry weeds, while no human or material damage was detected according to the report concerned with monitoring the incident.

She added that a plan was activated to respond to the threat of forest fires after merging the leaderships of the governorates of Al-Namas and Nauma with one room, in the middle of the fire area, and a reference area was identified and the site supported with mechanisms from municipalities, civil defense, agriculture and volunteer teams, in coordination with Aramco for ground support and spraying aircraft.
The field command room made a plan to evacuate the villages if necessary, equip suitable shelters, and open lines with village deputies for readiness.

These were the details of the news Exposing the damage caused by the Tanuma fire in Saudi Arabia... for this day. We hope that we have succeeded by giving you the full details and information. To follow all our news, you can subscribe to the alerts system or to one of our different systems to provide you with all that is new.