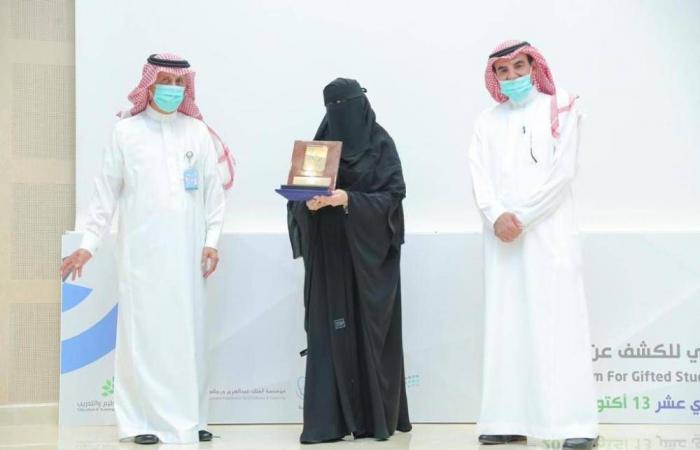 Today, in Riyadh, the largest Saudi campaign to discover gifted students in all Saudi regions was officially launched, through the national program for gifted detection in its eleventh edition, led by the King Abdulaziz and His Companions Foundation for Giftedness and Creativity “Mawhiba”, in partnership with the Ministry of Education and in cooperation with the National Center for Measurement . The inauguration ceremony, sponsored by the Minister of Education, Hamad bin Muhammad Al Al Sheikh, took place at the headquarters of the Mawhiba Foundation, in the presence of the Secretary General of Mawhiba, Dr. Saud Al-Mathemi, and the Deputy Minister of Education, Dr. Abdul Rahman Al-Asimi. The Secretary-General of Mawhiba Foundation said in his speech during the celebration, “The national program for gifted detection, in its eleventh year, is a model for integrative work between state institutions, through the strategic partnership between Mawhiba and the Ministry of Education and measurement in the field of discovering and caring for talented people in the Kingdom.He added, “2011 AD was launched, based on a firm foundation and a solid base of effective and fruitful partnership that worked according to an integrated system, whose goals were directed towards discovering, caring and investing talented people as future leaders to achieve the Kingdom’s vision 2030, as they are the ones who create jobs and technology producers, in a way that serves and contributes to achieving development.” Sustainable, to consecrate the presence of the Kingdom of Saudi Arabia on the map of international competitions and in the first row among the countries of the developed world, through local, regional, global and cross-border coronation platforms. Dr. Saud Al-Mutahmi stated that discovering the gifted is one of the steps of sponsorship, and that the program is no longer the only one to detect talented people, saying that there are other measures in Mawhiba for discovery, including:

Kangaroo is a talent

All of these are measures that show the community of students with multiple mental abilities, until it became necessary for community institutions to compete to develop these mental capabilities and direct them in a way that serves the needs of society, by providing specific programs that develop this divine gift. Al-Mutahmi stated that as a result of the great demand for the program and its comprehensiveness for the largest number of male and female students, and with the launch of its eleventh version under an exceptional circumstance due to the Corona pandemic, the program will be made available to students remotely, as it will be available at the headquarters of the Qiyas Center for the first time, in a new experience to implement the program In a way that keeps pace with the requirements of the times. He said that the outcome of the past ten years of the program’s life witnessed the nomination of more than 594,000 male and female students, of whom more than 406,000 students have tested, and more than 133,000 students have qualified among them. He explained that Mawhiba was able during the Corona crisis to overcome the challenges of the ban in a flexible way that is in the interest of the talented and maintains their safety. Enrichment programs were implemented during the summer “remotely” for 4460 male and female students, and she merely administered the Kangaroo Mawhiba competition for Mathematics 2020 “remotely”, with the participation of tens of thousands of students. International, in a strategic partnership with the Ministry of Education, King Abdullah University, the Royal Commission for Jubail and Yanbu, and the King Saud and Princess Noura Universities, and they were able to excel, as the children of the Kingdom who are students of talent and education since the beginning of the Corona pandemic have achieved 41 international wins in various competitions and fields, and they raised a talent pool of global achievements To 390 international victories over the past ten years.

For his part, the Deputy Minister of Education, His Excellency Dr. Abdul Rahman Al-Asimi, said in his speech during the celebration, “The National Program for Gifted Identification is one of the pioneering programs implemented in a strategic partnership between the Ministry of Education, Mawhiba Foundation and Measurement Center, stressing that the wise leadership always emphasizes the importance of building the human being as the basis of any A real developmental movement, adding that the wise leadership gives its children of talented and talented people every care and support to encourage an extension of the correct approach that the Kingdom has undertaken since the era of the founding king in caring for, encouraging and disseminating science, and caring for and adopting outstanding students, scholars and leaders. To evoke the global position of the Kingdom and raise its flag and name in every forum, which is the care that is based on confidence in the people of this country in choosing them as the main pillar for development and advancement of the homeland, and the pioneers of the national transformation locomotive of knowledge and production. And the Deputy Minister of Education stated that over the past ten years, efforts have been concerted. The greatest impact is in discovering talented students and providing them with appropriate care, believing in the importance of investing in people and capital Human rights and transformation into a knowledge society in which sustainable development is achieved, as emphasized by the Kingdom’s Vision 2030.

Al-Asimi said that these efforts resulted in a large number of national programs and projects aimed at raising the efficiency of human capital and enhancing the level of its contribution to the development process, pointing out that the ambitions to develop and upgrade education and raise the quality of its outputs are great in light of the many challenges the world is witnessing due to the current health conditions. With which the Ministry of Education was keen to continue the educational process from a distance, which reflected the great support given by the rational government to education for the nation and its elevation. He pointed out that the Ministry has taken upon itself to adopt the gifted and talented and take care of them in all regions of the Kingdom, to take care of the sources of creativity and focus on showing the tremendous human potential of the distinguished people of the country, stressing that the Ministry of Education is working hard in cooperation with the concerned authorities on a scale that includes a larger segment of students, starting from the stage of Early childhood and high-capacity students with disabilities, to nurture, nurture and stand with talents for a society capable of renewing its experiences. Al-Asimi sent a message to male and female students, stressing that they are the hope of the nation and its bright future, saying that one of the most important conditions for excellence and creativity is not only having talent, but also working diligently and diligently to reach the highest levels of success.

Al-Asimi extended his congratulations to the distinguished and winning education departments, appreciating their efforts to pass the criteria for nominating talented students and achieving all requirements, and also thanked the supporting bodies and the Mawhiba Foundation and the work team for their efforts with all partners, to ensure the excellence of this qualitative program and the continuation of its success over the past years.

The Director of Talent Detection Department in Majid Al-Madi talent said that this year represents a challenge for Mawhiba and its partners to reach record numbers and improve the program and its outputs, and he pointed to the development witnessed by the program this year, such as making registration available through a unified platform, and allowing testing to be performed from home.

At the end of the ceremony, the Deputy Minister of Education, Dr. Abdul Rahman Al-Asimi, and the Secretary General of Dr. Mawhiba official website

These were the details of the news Saudi Arabia launches the largest project to discover talented people and... for this day. We hope that we have succeeded by giving you the full details and information. To follow all our news, you can subscribe to the alerts system or to one of our different systems to provide you with all that is new.