The Minister of Industry stands at the national industries in the... 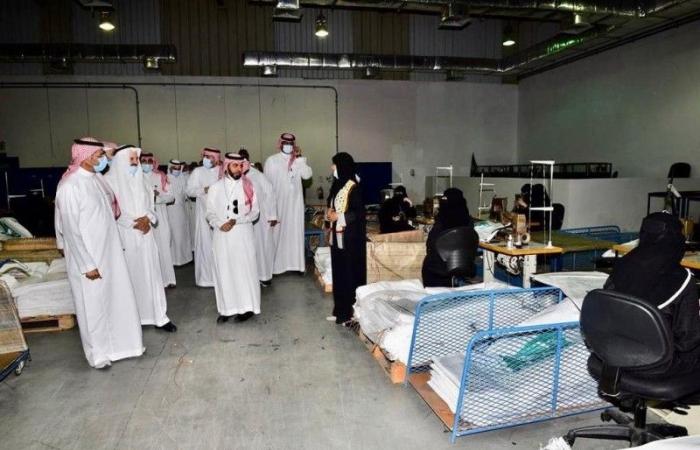 Where the Minister of Industry and Mineral Resources visited the Sadara Chemical Company, whose project represents an unprecedented challenge, as it is considered the largest integrated chemical complex in the world to be built in one go, as it consists of 26 world-class factories, with a production capacity of more than three million metric tons of chemical products annually. The total investment volume of the project is about 75 billion Saudi riyals (20 billion US dollars), and the number of employees in it is 3600, and the Saudization rate is 71%.

The Minister’s tour continued, as he got acquainted with SATORP and the economic weight it represents in the region. The production capacity of the company is 460 thousand barrels per day, which is considered the largest aromatic petrochemical refining project in the world and the first integrated petroleum refinery in the Kingdom.

While he listened to a detailed explanation about the company, its products, its future plans, and its major role in supporting the manufacturing industry, as it had a positive and effective impact in the petrochemical industries in Jubail Industrial City. SATORP Company manufactures various petrochemical feedstocks, such as propylene, benzene, liquefied petroleum gas, sulfur and paraxylene SATORP has also emerged as a major center for producing the automotive fuels (gasoline) and diesel required for the domestic market.

He also visited SABIC and got acquainted with its pioneering role as a giant of the petrochemical industries, which contributes to supporting the industry with modern technologies and innovative products, as he witnessed the economic and industrial strength of the Saudi Kayan Company, which began practicing its industrial activity in 2011, through an introductory presentation about the company and its products. The most prominent of its development plans, the Saudi Kayan Petrochemical Company complex is considered one of the largest complexes in the world and is located in Jubail Industrial City, and it is a pioneer in the field of producing chemicals, polymers and specialized products.

After that, Minister Al-Khorayef visited the National Industrialization Company and listened to a detailed explanation of the company’s course during the past years and its future plans in the industrial field. The visit also included a tour of the factory and the company has a group of investments in the field of petrochemicals, chemicals, plastics, metals, manufacturing industries, industrial services, technology and the environment.

It is one of the largest Saudi industrial and petrochemical companies and one of the largest international investors in titanium dioxide. Manufacturing is now distinguished by a great deal of expertise, competencies, modern technologies and innovative solutions that add value to the company’s products around the world.

The visit of the Minister of Industry and Mineral Resources Bandar Al-Khorayef to the Jubail Industrial City was concluded with a visit to the Al-Moajil Packing Bags Factory, which is the oldest plastic manufacturing plant in Jubail Industrial City, which meets the growing market demand for woven polypropylene bags. Inside the factory, he also visited the women’s section in the factory, where he was briefed on the work of girls in sewing plastic bags to increase its durability.

It is worth noting that Jubail Industrial City embraces many industries, namely basic, secondary and light industries, in addition to support. The number of industries is estimated at 418, with an estimated capital of 472.41 billion riyals, and the number of employees in it is 89,065.00.

These were the details of the news The Minister of Industry stands at the national industries in the... for this day. We hope that we have succeeded by giving you the full details and information. To follow all our news, you can subscribe to the alerts system or to one of our different systems to provide you with all that is new.