A Houthi car bomb in the airspace of Saudi Arabia and... 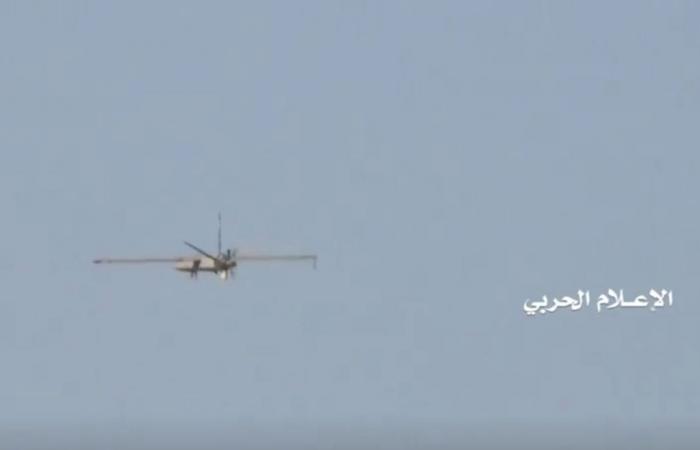 The Yemeni National Army announced field gains in Al-Jawf governorate, while the Saudi-Emirati coalition said that it had shot down – on Sunday – a bombed drone over Najran.

The Yemeni government forces have confirmed their control of most of the sites in the Dahayda area and the sites adjacent to the Al-Khanjar camp in the Khub Washa`f district in Al-Jawf governorate, after battles with the Houthis.

The intensity of the fighting has escalated over the past few days, amid the army’s advance and its control over sites east of Al-Hazm, the administrative center of Al-Jawf Governorate.

The Houthi group has controlled the capital of Al-Jawf since last March, while government forces have been making military efforts for months to retake it.

The Yemeni army mourned the commander of the 110th Infantry Brigade, Brigadier General Abdul Aziz Hankal, who was killed during the confrontations with the Houthis, east of Al-Marazeeq area in Al-Jawf.

For its part, the Houthi group admitted – yesterday evening, Saturday – that 6 of its field leaders were killed in the ongoing battles on a number of fighting fronts in the country.

The Houthi-affiliated Sheba Agency stated that the group had buried 6 of its leaders in the governorates of Sanaa (north) and Hajjah (northwest) in the presence of senior officials.

In addition to Al-Jawf, battles continue between the two sides in the coastal city of Hodeidah, in western Yemen, resulting in dozens of people being killed and wounded.

For his part, the spokesman for the coalition forces, Colonel Turki Al-Maliki, said that the joint coalition forces managed, on Sunday morning, to intercept and destroy a “car bomb” launched by the terrorist Houthi militia, in a systematic and deliberate manner to target civilians in the city of Najran.

This is the third “drone bomb” launched by the Houthis at Saudi Arabia during the past 24 hours.

This comes 5 days after Saudi Arabia announced that it had thwarted an “imminent terrorist attack” by the Houthi militia in the south of the Red Sea. Saudi Arabia said that a remote-controlled Houthi boat had been discovered, and confirmed its destruction near the port of Salif.

Since 2015, a coalition led by the Saudi neighbor has been carrying out military operations in Yemen in support of government forces, in the face of the Iranian-backed Houthis who have controlled provinces, including the capital, Sanaa, since 2014.

The ongoing war for the sixth year left 112,000 dead, including 12,000 civilians, and 80% of the population – about 30 million people – became dependent on aid to survive in the worst humanitarian crisis in the world, according to the United Nations.

These were the details of the news A Houthi car bomb in the airspace of Saudi Arabia and... for this day. We hope that we have succeeded by giving you the full details and information. To follow all our news, you can subscribe to the alerts system or to one of our different systems to provide you with all that is new.